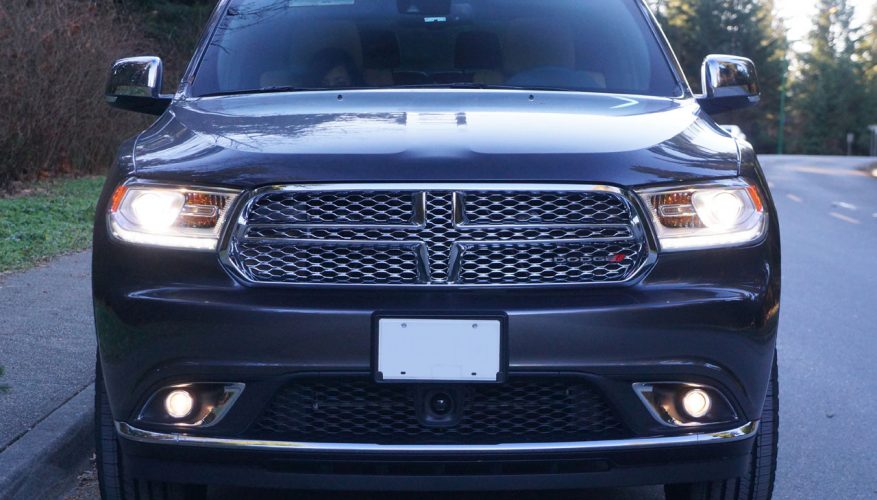 By: Trevor Hofmann
If you’ve been perusing reviews about Chrysler Group vehicles lately (the new name is Fiat Chrysler Automobile by the way), you’ve probably seen a lot of well-worn comments such as “premium-level detailing” and “why bother paying more for a luxury brand?” And while tired old verbiage can make for mind-numbing reading, there’s a reason for all the cliché statements.

From top-line models like Chrysler’s 300 and Jeep’s Grand Cherokee right down to entry-level runabouts like the new Dodge Dart and Fiat’s tiny little 500, there’s something special about these brands and the vehicles they build, and the same goes for the full-size 2014 Dodge Durango. From the exterior styling with its new lower fascia, unique grille treatments for each trim level, and LED DRLs in front, and 192 LED-enhanced signature “racetrack” style full-width taillight cluster and covered trailer hitch in back, to the design, fit, finish and chosen materials of the interior, you won’t feel like you’re downgrading if you step out of a Cadillac Escalade or Lincoln Navigator. Quite the opposite really, the Durango, at least when optioned out in top-tier Citadel trim, is better than either competitor, in an understated more European sort of way. I suppose stylistic influence from the Italians is starting to show up in even the most American type of vehicle, this large SUV.

It’s an understated design compared to its aforementioned North American rivals, classy with chrome trimmed detailing around the primary gauges, the new steering wheel hub, dash vents, centre stack panel, lower console surround, knobs and switchgear, cupholders, and door pulls, while the soft-touch black dash and door uppers look business-like and gorgeous camel leather seats and armrests appear relaxing, like lounge chairs from the lobby of one of those fabulous modern European boutique hotels. And the Nappa leather is really fine, perforated for the seat inserts while the bolsters are nicely stitched in the same fashion as the armrests, with contrasting black thread. Hard plastics are only used on the lower door panels and lower console, these surfaces high in quality and nicely textured to look almost identical to the softer stuff above. The radio and HVAC buttons and dials are large so that they’re easy to use with winter gloves, and the latter are encircled in a nice grippy rubber. What’s more, the radio changer and volume control rocker switches on the backside of the steering wheel spokes are as innovative as ever, but Dodge has updated the buttons so they feel more modern and click more positively.

A surprising standard feature on the base Durango SXT is proximity sensing remote access with pushbutton ignition, as is its 12-way driver’s seat including four-way lumbar adjustment, auto-dimming rearview mirror, leather-wrapped multi-function steering wheel with paddle shifters, seven-inch customizable in-cluster display, and front passenger forward-fold flat seat, while I was impressed to see a capless fuel filler too. Starting to become more common amongst new vehicles are standard colour touchscreen infotainment systems, this seven-occupant SUV including one that measures five inches across, along with standard Uconnect hands-free communication with Bluetooth streaming audio, a USB connector, auxiliary input jack and SD card slot, while SiriusXM satellite radio comes with a free one-year subscription. You won’t have to manually operate the HVAC system either, with all Durangos getting standard automatic tri-zone temperature control, while other niceties include illuminated entry, ambient lighting on the door trim panel as well as illuminated cupholders, front and rear interior LED lamps, a full-length floor console, an overhead console, second-row 60/40-split fold-and-tumble seats, 50/50-split folding third-row seatbacks with remote folding head restraints, and more.

One of my favourite Durango features is the dial shifter. It’s better than Lincoln’s dash-mounted pushbutton shifter that forces you to reach an uncomfortable distance forward to change gears. After all, if you’re going to do something different, it might as well be more convenient while saving space. Not all is roses with the Durango, however. First off, the doors of my tester were difficult to close, really needing to be slammed with aggression. I always seemed to be driving around with a door ajar, forcing me to pull over to slam one shut again. Also not good, my tester’s foot-operated parking brake kept sticking when trying to release it, causing the need to stop after driving away from being parked in order to re-release it. An electronic parking brake would work better and save weight. Lastly, the proximity sensing smart locks weren’t very smart. I needed to push the lock button on the door handle two to four times on average before it locked the doors, rarely working on the first try.

Once underway the paddle shifters felt sporty, especially mated to the Durango’s jewel of a transmission. The standard automatic boasts eight forward gears for a smoothness that’s beyond comparison, and snappy shifts at full throttle. The ZF-sourced gearbox even monitors driving behaviour, downshifting automatically when it senses braking and holding gears longer when getting on the throttle. Acceleration in mind, the Durango’s optional 5.7-litre V8 produces a legendary Hemi snarl when revs build up, its 360 horsepower and 390 lb-ft of torque ample to propel the big ute’s hefty 5,330-lb mass forward with surprising vigor. Through the corners it’s easy to appreciate its European influenced undercarriage, the Durango continuing to ride upon a platform architecture developed off the back of the Mercedes-Benz GL-Class, a throwback to previous DaimlerChrysler days. Therefore the Durango is confidence-inspiring in the corners, at least as far as large utilities go, and a dream on the highway where its long wheelbase, wide stance, and well-sorted suspension tuning allow for excellent stability.

Unlike the old Durango’s part-time four-wheel drive system, the new SUV uses one of two available all-wheel drive systems, depending on the engine choice. The 290 horsepower 3.6-litre V6 (with 260 lb-ft of torque) uses a full-time, single-speed unit, whereas V8-powered Durangos get a two-speed unit with AWD low-lock, neutral and full-time active AWD with variable torque split. Dodge says the Durango is still a force to be reckoned with off the beaten path, but I’m guessing most buyers will be more interested in its impressive tow rating of 2,812 kilos (6,200 lbs) with the V6 and 3,356 kg (7,400 lbs) with the V8.

If fuel economy is more important to you than towing capacity or straight-line performance, you may want to stick with the standard V6 that gets a 10-percent improvement at the pump over last year’s base Durango. The Transport Canada EnerGuide numbers are 12.4 L/100km in the city and 8.3 on the highway, whereas the V8 will suck back a claimed 15.6 city and 9.1 highway. Let’s remember that these numbers are actually quite optimistic, and that the U.S. EPA’s more realistic figures are a metric-converted 13.8 city and 9.8 highway for the V6 AWD or 16.8 city and 10.7 highway for the V8 AWD, so use the Canadian numbers for comparison purposes and the U.S. ones for a reality check.

I’m guessing if you’re reading this review you’re probably aware that large SUVs aren’t exactly the most efficient modes of transportation on the planet, and that towing as well as interior roominess and seating/cargo flexibility are the real reasons to purchase. The base Durango’s seats are set up with a centre bench for 2/3/2 seating unless equipped with optional second-row captain’s chairs like my tester. The second row should be very comfortable for any body type, and my five-foot-eight frame even found ample room in the third row, with head and legroom to spare for someone taller.

Behind the third row there’s more than enough cargo space for most peoples’ daily needs at 487 litres, although if you don’t use that third row much you might want to leave it flat for 1,350 litres at your beck and call. For those occasional trips to the dump, or the hardware store for building supplies a total of 2,393 litres of cargo capacity can be had if you fold down the second row. And I love the rear cargo cover. It can be placed behind the third row or lengthened by fastening the end caps to fit behind the second row, making itself useful no matter how you want to set up your seats.

Even in top-line Citadel V8 trim you can option out your Durango with a number of packages, including the aforementioned $600 second-row fold and tumble captain chairs that also include seat-mounted inboard armrests and a mini console with cupholders and more; the $1,450 Technology Group that includes Adaptive Cruise Control with Stop, Advanced Brake Assist, Blind Spot and Cross Path Detection, and Forward Collision Warning Plus; a $2,150 rear DVD entertainment centre that includes a Blu-Ray compatible dual screen video system; a $300 Skid Plate package that adds 4×4 protection to the front suspension, fuel tank, transfer case and underbody; a $795 Trailer Tow IV package that includes a seven and four pin wiring harness, Class IV receiver hitch, heavy duty engine cooling, a rear load leveling suspension, and a full size spare; two $1,085 Mopar appearance packages, one in chrome and one in black, that add tubular side steps, a bright pedal kit, plus front and rear door entry guards; $525 for GPS navigation; and more.

I’ll leave you to configure the Durango yourself on Dodge’s website, and check out the various trim levels and all that comes with them. No matter how you spec out a 2014 Durango I’m quite certain it will impress you in its ability to deliver a premium experience for a very mainstream price.
©(Copyright Canadian Auto Press)
Car Shopping Tools