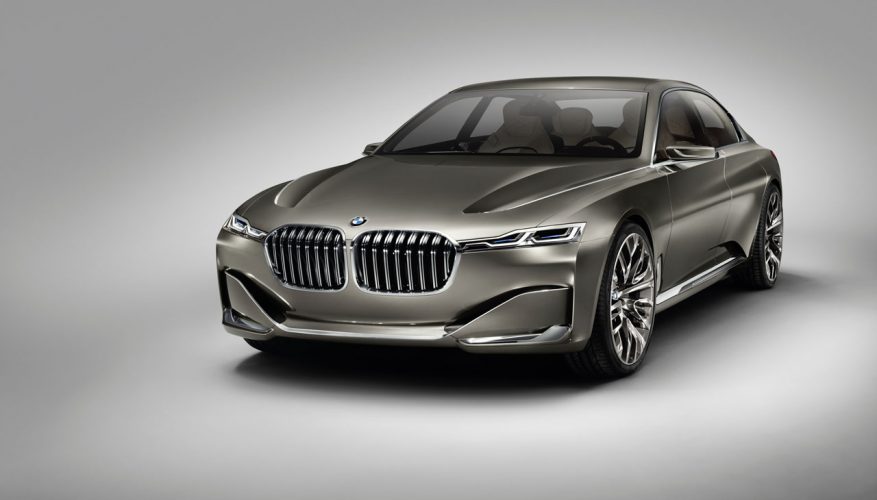 By: Simon Hill
Following in the footsteps of the BMW Pininfarina Gran Lusso Coupe that debuted at the Concorso d’Eleganza Villa d’Este, BMW has unveiled a similarly forward-looking luxury four-door concept at the 2014 Beijing International Automobile Exhibition.

The Gran Lusso Coupe was BMW’s first-ever collaboration with Pininfarina, and was said to be an "interpretation of a luxurious BMW coupe as seen through the eyes of Pininfarina." The recently unveiled Vision Future Luxury Concept borrows heavily from the coupe’s styling cues and interprets them in a four-door form that BMW says "furnishes a long-term outlook on the perception of modern luxury for the BMW brand."

Summing up the concept, BMW’s head of design Karim Habib explained that, "the design of the BMW Vision Future Luxury is the messenger of our philosophy of modern luxury, one in which innovative technologies play a key and vital role."

Key to efficiency and performance are lightweight construction techniques, and the Vision Future Luxury Concept makes extensive use of carbon fibre to achieve an efficient structure. This is especially evident at the pared-down B-pillar, where carbon-fibre construction allows the seat frames and centre console to be integrated with the car’s load-bearing structure, thus eliminating the need for a bulky B-pillar. A coupe-like roofline and sloping trunk lid convey a sporting image while also reducing drag, and a carbon strip at the doorsill offers a discreet nod to the concept’s lightweight engineering. At the front, BMW’s instantly recognizable twin kidney grilles and dual headlights are given a modern interpretation, with a lean headlight profile that’s made possible thanks to BMW’s new Laserlight parallel-beam lighting technology.

Inside, the geometry and functions of individual components are integrated into a single lightweight whole using layered composite structure. This technique uses a base layer of carbon fibre, followed by a functional layer containing control, display and lighting functions, a load-bearing layer of aluminum, and top layers of wood and then leather to create a warm, comfortable ambience. In any given area of the interior, this multi-layer structure is then milled down to the appropriate depth depending on what surface material and function is required. This construction method cuts weight substantially by always paring the interior geometry to the essentials, and also makes for seamless transitions between interior surfaces.

The driver-centric cockpit uses a wrap-around cluster of three programmable intermeshed displays, with a separate display for the passenger. In this way, the driver can see vehicle-related information while the passenger can access applications such as BMW’s ConnectedDrive Luxury Concierge service to purchase concert tickets, for example, without distracting the driver. Further aiding driver attentiveness is a heads-up display that can selectively highlight critical information such as speed-limit signs, traffic light phasing, road hazards and such, projecting the information directly into the driver’s line of sight.

In the rear quarters, a pair of displays and a detachable touch command tablet put the finishing touch on the user interface concept, while two deeply contoured individual seats and a retractable table provide what BMW calls "a luxurious haven of personal space."

BMW didn’t offer any hints in its press release as to how the Vision Future Luxury Concept might be powered, but the discreet eDrive badge visible on the rear of the car hints that it could be made available with some sort of plug-in hybrid powertrain, although a powerful conventional gasoline engine would also seem likely if the intriguing concept is rendered into production form.

The 2014 Beijing International Automobile Exhibition runs from April 21 until April 29.