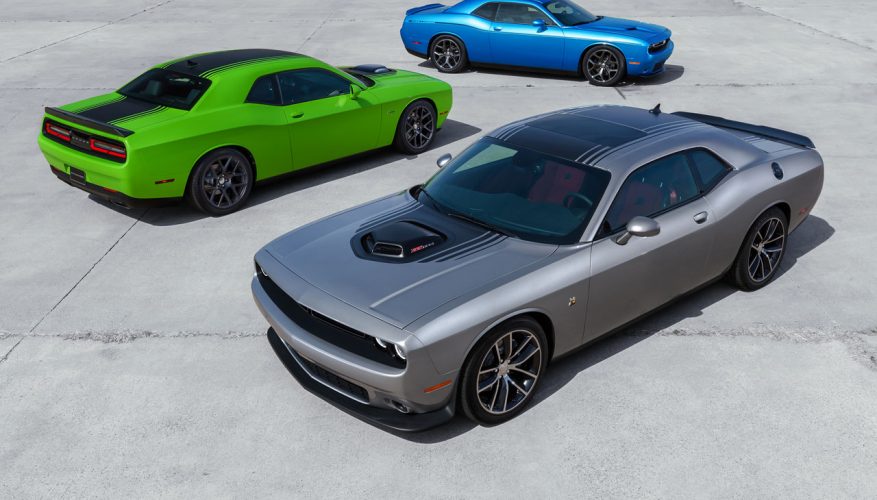 By: Simon Hill
The whole point of icons is to be iconic, and Dodge appears to be keeping this in mind when it comes to refreshing its heritage-inspired Challenger pony car. The Detroit builder has been teasing enthusiasts over the past few weeks with hints about the upcoming changes for 2015, but those who love the car’s muscular, old-school looks will be pleased to know that the most dramatic changes are under the hood and in the entirely overhauled cabin.

Externally, Dodge has tweaked the Challenger only slightly, taking some fresh styling cues from the 1971 Challenger to evolve the design by one retro model year (the current Challenger took many of its design cues from the original 1970 model). The new styling cues include a split-design grille surround, split-design taillights, projector headlights with LED halo surrounds, projector fog lights, and a range of new retro and high-impact colours and stripe options.

There are also several new models for 2015, including an R/T Plus Shaker model with a fully-functional engine-mounted "shaker" hood scoop feeding air to a 5.7-litre Hemi engine that cranks out 375 horsepower and 410 lb-ft of torque. For those who want even more power there’s an all-new 6.4-litre Scat Pack model with a thundering 485 horsepower and 475 lb-ft of torque, and there will also be a 392 Hemi Scat Pack Shaker model offering additional performance hardware for what Dodge calls "maximum throwback heritage styling."

In all, the 2015 Challenger will be available in eight trim levels: SXT, SXT Plus, R/T, R/T Plus, R/T Shaker, R/T Plus Shaker, 6.4-liter Scat Pack and 392 Hemi Scat Pack Shaker. The Challenger SXT and SXT Plus models feature a 3.6-litre Pentastar V6 that delivers an efficiently powerful 305 horses and 268 lb-ft of torque.

Getting the 2015 Challenger’s power to the ground will be a choice of either a new class-exclusive eight-speed TorqueFlite automatic transmission or an available six-speed manual transmission for V8 models. In addition to the new eight-speed automatic, the 2015 Challenger also gets new electric power steering, a weight-saving cast aluminum axle housing, updated suspension, available Brembo four-piston brakes, and new selectable drive modes that adjust steering, engine response, automatic transmission response, and stability control for various driving conditions.

Inside, the 2015 Challenger gets a completely redesigned cockpit featuring upgraded materials, technology and style, with 14 different colour and trim selections inspired by the muscle car’s roots. Taking an interior cue from the 1971 Challenger, there’s a new high-sill centre console with a driver-focused instrument panel. The all-new instrument panel features a customizable seven-inch TFT instrument cluster screen straddled by an analog speedometer and tachometer, while the centre stack houses new standard five-inch and available 8.4-inch Uconnect touchscreens. An all-new media hub with an SD card slot, USB outlet and auxiliary audio input is housed inside the centre console’s armrest. Other new tech features for 2015 include adaptive cruise control, blind-spot monitoring, and forward collision warning.

The 2015 Challenger will continue to be built at Fiat Chrysler Automobile’s Brampton Assembly plant in Ontario, with production scheduled to begin in the third quarter of 2014.