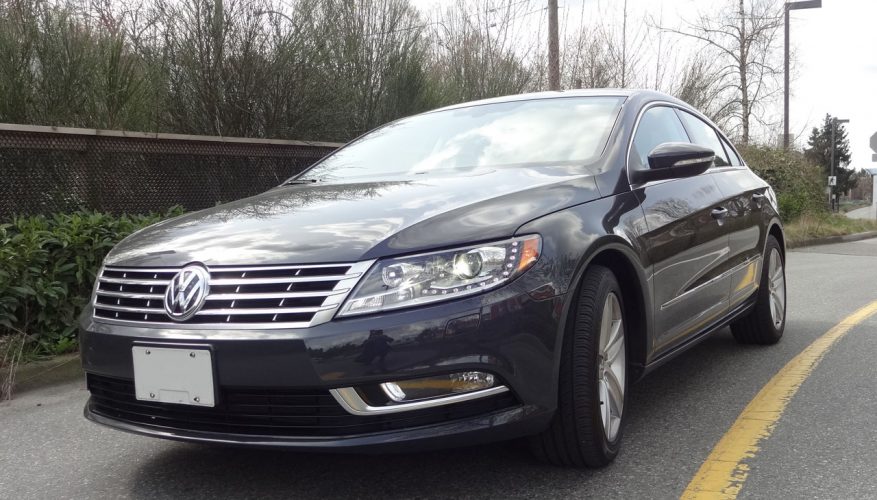 By: Simon Hill
For those who like the concept of a four-door coupe, but don’t want to spend the big bucks for a Mercedes CLS, Audi A7 or BMW 6 Series Gran Coupe, Volkswagen’s everyman solution is the CC, or "Comfort Coupe."

While the CC is based on the Passat (indeed it was originally called the Passat CC) and has the same wheelbase as its more traditional mid-size sedan sibling, it is 27 mm longer, 50 mm lower and 36 mm wider. Combined with its swooping coupe-like roofline this gives it a distinctly sporty and luxurious look compared to the Passat.

The CC carries over into 2014 essentially unchanged from 2013, with three trim levels – Sportline, Highline, and V6 Highline, the latter featuring all-wheel drive. While manufacturers often try to dazzle automotive journalists by putting them into top-of-the line models, Volkswagen took the opposite tack with the CC and set out to impress me with a base Sportline CC.

At first glance it’s hard not to be impressed. The CC is a good looking car, and while I’ve never been one for calling four-door cars "coupes," the CC does pull off the look well. My one criticism would be the grille and front fascia, which was updated in 2012 to offer a family resemblance with the rest of the Volkswagen lineup. It’s not a bad looking front end, and the CC spices it up with LED accent lighting at the outer edge of the headlights, but given that the CC is to a large extent a styling exercise, a Passat in sleek clothing, why not give it a more distinctive front end to go with its swoopier bodywork?

As might be expected, the CC does exact some penalties in order to maintain its rakish profile. For starters, the back seat doesn’t offer as much headroom as the Passat, although I was pleasantly surprised to find that at five-foot-eleven I fit just fine in the outboard seats with even a bit of headroom to spare. The trunk is also smaller than in the Passat, at 374 litres compared to 430 litres, but while this might mean that golf clubs have to go in diagonally I found it plenty big enough for everyday use (which for me includes hauling enormous sail bags back and forth to the marina), and there are 60/40 split-folding seatbacks for those occasions when you have excess or oversize cargo (the three-across seating in the back is another change that was made in 2012 – earlier CCs had twin bucket seats in the back).

Perhaps the steepest penalty is the somewhat restricted outward visibility imposed by the CC’s low greenhouse, thickish roof pillars and rather bulky headrests. Most Volkswagens offer better-than-average outward visibility, but while driving the CC in the city I found that my visual awareness was hampered to the point that I’d occasionally end up looking at cars in my rearview mirror and wondering where they’d come from and whether I’d just accidentally cut them off. In fairness I should note that the CC has better visibility than a lot of two-door coupes, and I did get somewhat better at knowing where to look as my week with the CC went on. Backing up isn’t a problem either, as the CC has a standard rearview camera.

Under the hood the CC Sportline and Highline models get Volkswagen’s proven 2.0-litre turbocharged four-cylinder engine, hooked up to either a six-speed manual transmission or, as in my test car, a six-speed DSG gearbox. This is a jewel of a gearbox, offering quick, crisp shifts and a nice hooked-up feel, but I’d love to see Volkswagen add a third automatic mode. As it is, I’ve always found D (drive) to be a little too upshift-happy and eco-minded, and S (sport) a little too aggressive and sport-oriented, holding the revs too high once you achieve a steady-state cruise. I call the modes "Dawdle" and "Scoot", and would love to see some sort of middle-ground "Normal" mode added. In practice, I tended to accelerate using Sport mode, shifting to Drive once I’d achieved a cruising speed (I’d have used the paddle shifters, but these only come with Highline trim).

With 200 horsepower and 207 lb-ft of torque on tap, the turbocharged four-cylinder engine offers good power around town and easy highway cruising, and fuel economy is quite good once the car is warmed up, with official city/highway ratings of 10.2 / 6.4 L/100km. My test car was showing a long-term average of 11 L/100km when I picked it up, but I found that impossible to maintain around town, with real-world readings closer to 15 L/100km during inner-city driving. That said, I reset the average economy once the weekend rolled around and by the time I returned the car on Monday it was again showing 11 L/100km average, so that would seem like a pretty realistic number to expect in mixed driving.

From a ride and handling point of view the CC is, more than anything else, well balanced. It’s unlikely to set anybody’s world on fire, but it does have a comfortable yet nicely buttoned-down ride, decent steering feel, and competent enough handling to make twisty roads a pleasure. The brakes felt solid and predictable, and this subjective evaluation is backed up by good performance ratings in independent testing.

Inside, the CC is attractive and well fitted, and while it’s clearly a Volkswagen there are several unique details that raise it a couple of notches above the Passat. In my test car these included genuine brushed-metal trim, and attractive two-tone rib-stitched upholstery executed in leatherette. Highline CCs get genuine leather-topped seating, but the Sportline’s leatherette is extremely convincing, to the point that it’s arguably better than some of the genuine leather found in other cars.

I’ve always found Volkswagen seats to be comfortable, and the CC doesn’t disappoint, offering good support and 12-way power adjustment for the driver (the passenger gets 8-way manual adjustment in Sportline trim, 12-way power in Highline). I did notice that the steering wheel tended to cut off the top of the instruments when I had everything else set to my satisfaction, but the CC isn’t the only car I’ve encountered with this issue, and I suspect I like to sit more upright than most.

The Highline V6 retails for $47,885 destination in. This top-end model includes all of the equipment from the Highline and adds a 280-horsepower V6 with 4Motion all-wheel drive and DSG automatic as standard equipment. The V6 also gets additional comfort and convenience features including a navigation system and rear sunshade.

With this range of pricing the Volkswagen CC is certainly more costly than its Passat sibling, but it’s also better equipped and a lot more stylish, offering the kind of four-door coupe looks usually reserved for much more expensive luxury cars. If that sounds like your idea of value, the CC should prove to be a tempting proposition.