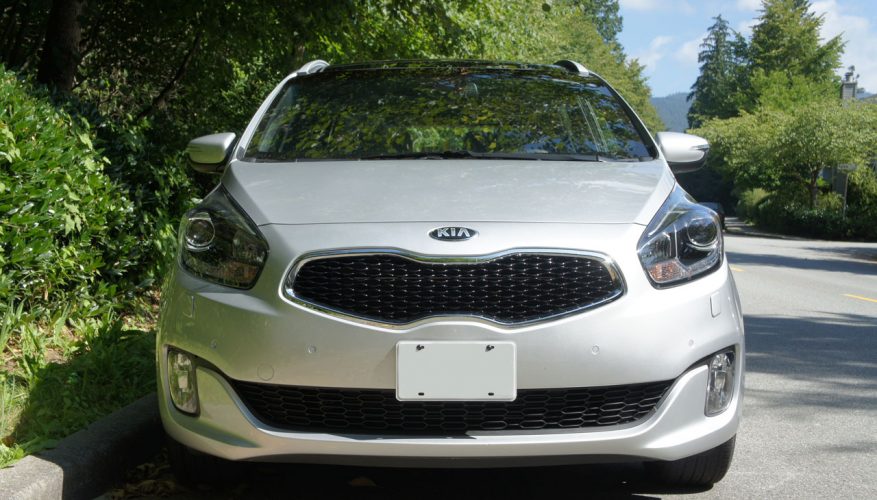 By: Jennifer Hofmann
I don’t think I can use the phrase "mini minivan". What really defines a vehicle as a minivan if it isn’t the sliding door(s) or the captain’s chairs in the middle row? To me, vehicles such as the Chevrolet Orlando, Mazda5 (the only true mini-minivan available in our market) and the Kia Rondo seem to fit into a mini SUV or car-based small crossover category. This seems to be particularly true of the Rondo. I can understand how it’s tricky to classify. The Rondo looks like a small car, seats seven, and has as many features fitted inside as possible. But really, do we have to label it? Can’t we live in a society where everything doesn’t need to fit into a category? Well, maybe for information’s sake I’ll stick with car/SUV crossover for now.

The Rondo has been completely updated for 2014. Exterior styling follows Kia’s sportier new European-influenced direction that’s already transformed the rest of the brand’s lineup, a look that upgrades the interior too. Improvements to the overall layout of the instrument panel and dash as well as the addition of more soft-touch materials throughout the cabin let you know you’re getting pretty nice quality for the money. The front seats are really comfortable with a newly added optional ventilated driver’s seat, while the soft perforated black (or optional beige) leather upholstery looked and felt good. I was pleased with the comfort of the second row as well. The third row?  Well, let’s face it. We really shouldn’t be expecting too much comfort back there considering the size of the vehicle. Unless you have children under ten or possibly a couple of traveling contortionists, I can’t see that you’ll want to be using the third row on a day to day basis. The second row slides forward to allow more legroom in back, but that can compromise second-row legroom for larger adults. Also, I found it difficult to get the second-row seat back into place after flipping it forward to access the third row, especially to the exact point that it started from. Other than this and the floor mats, which looked a bit like an afterthought, I was impressed.

If you try to go anywhere with all seven seats filled you’ll only be left with a tiny 232 litres (8.2 cu ft) of cargo space behind that third row, which is a couple of backpacks and a bag or two of groceries. With the third row down, however, you end up with a generous 912 litres (32.2 cu ft) of space for your gear. That’s picking up people and their luggage from the airport kind of room. And finally, with the second row folded flat you’ll have a whomping 1,840 litres (65 cu ft) available. We’re talking, "fit a baby kayak in there" kind of space. Nice.

From back to front the updated Rondo is much more modern in design, with so many nice details added everywhere. Sticking with Kia’s longtime theme of loading in as many features as possible, a flick of a button on the steering wheel lets you scroll through the multi-information display between the speedometer and tachometer, allowing access to the usual trip odometer, real-time and average fuel economy results, and compass, but I certainly didn’t expect the ability to choose between steering feel and reaction. I’m guessing that I wouldn’t play with this too much after the novelty wore off, but it’s nice to have the option of changing steering feel between drivers (Dad wants Comfort mode, daughter wants Sport mode).

How ironic to have this premium performance feature in a car that really isn’t built for driving fun. I suppose off the line acceleration is good enough for most situations, although it got a bit sluggish with extra adults in back, and even with the steering set to Sport mode it seems a bit disconnected and dull. The brakes were a bit grabby too, although fully effective and supported by ABS, electronic brakeforce distribution and brake assist along with traction and stability control. The ride is pretty smooth and interior quiet, though, so therefore those looking for comfort over hot handling should be satisfied. The Rondo was obviously designed more for it’s extra versatile interior than sporty driving.

Compared to last year when Kia offered a four-cylinder and V6 option, you now have only one engine available, a 2.0-litre four-cylinder making 164 horsepower and 156 lb-ft of torque (which is 11 horsepower and 13 horsepower less than the old 2.4-litre four in the 2012 model – there was no 2013 Rondo in Canada). It comes paired with a six-speed manual transmission or an available six-speed automatic that Kia dubs "Sportmatic" because of its manual shift mode feature. I would have liked a little more power from this lone engine, and it would have been nice if it were also a bit quieter. I found the claimed fuel economy of 9.2 L/100km city, 6.3 highway, 8.3 combined to be more than a little on the optimistic side. I didn’t notice the active ECO mode button (which retards the Rondo’s responses) until later in my test week (it’s down by the left knee next to the heated steering wheel button, which would’ve been nice to use earlier in the week too), as I experienced an average of 13 L/100km with my typical heavy-footed driving. That’s a bit much considering that this model weighs less than last years Rondo, and as mentioned it’s not exactly a powerhouse.

As you can probably tell by the features already mentioned, the vehicle I had the pleasure of testing all week was not just your average Kia Rondo, no sir. The base price for a Rondo is $21,695, but the top-line EX Luxury with the Navigation package that I tested came in a $32,195, plus $1,665 for freight and pre-delivery charges. One of the features that makes upgrading to the Luxury package worthwhile is the huge panoramic sunroof, which adds a lot of light and an open feel. Some other features that only come standard in the EX Luxury package include the 18-inch alloy wheels on 225/45R18 all-season tires (as opposed to the standard 16s and optional 17s), Xenon HID headlamps and LED tail lamps, headlight washer nozzles, front parking sensors, those wonderful "driver cooled" seats I mentioned earlier, heated rear seats, and if you want them covered in leather it’s only possible with this package. Lastly, the 50/50 split-folding third row seat I spoke of previously comes standard with EX Luxury models, but it’s available as an option with all other trims. Also available, but only optional with the EX Luxury, is the multimedia interface with voice-activated navigation I just mentioned above, and a sweet sounding premium audio system with external amp and sub-woofer.

After spending a week with the 2014 Kia Rondo, I still can’t say how I would classify it.  An SUVan? CarUV? No matter what you call it, the Rondo delivers the roominess and passenger capacity of a van, the smaller size and handling of a car, and the cargo versatility of an SUV. I can see how it could be a great addition to most families’ active lifestyles.
©(Copyright Canadian Auto Press)
Car Shopping Tools