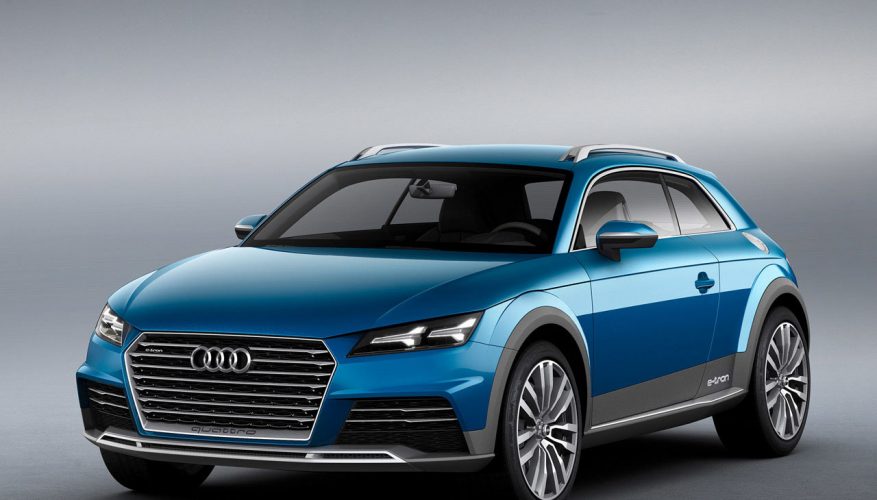 By: Trevor Hofmann
New York is hardly the only game on the global map as far as auto shows go, the next big event being the Beijing Motor Show in only a couple of week’s time. Expected at that show is the production version of Lexus’ compact NX crossover, while Nissan has promised a new sedan. Likewise, Audi has its targets firmly locked on what became the largest automotive market in the world (as measured by automobile unit production) back in 2008, and therefore will increase brand awareness by debuting a sleek new crossover concept.

The German premium carmaker has revealed artist’s renderings of a new five-door coupe-shaped crossover, making it appear as though it has Range Rover’s popular Evoque and BMW’s new X4 in its crosshairs. The new concept, which will not be called the Q4 as it’s unofficially being named in some reports ahead of its official reveal, will be based on a variation of the new TT undercarriage in similar fashion to the Allroad Shooting Brake Concept that arrived on the scene in January at the North American International Auto Show in Detroit.

Overall styling of the two models bear strong resemblance to the new TT Coupe that showed up in Geneva last month, a car that was well received by Audi customers and pundits alike. A slightly larger more practical five-door alternative to the sporty two-door would be welcomed by growing families who don’t quite want to fully grow up to a Q5 or Q7 yet, so we should probably expect something like this crossover coupe within the Audi lineup sometime within the next few years, although let’s not speculate on what platform it will ride atop just yet. All the same, the concept you see here is slightly larger than a TT, about the size of the new Q3 compact crossover. Let your imagination fill in the blanks.

Like the Allroad Shooting Brake Concept, this new variation on the TT theme will get similar headlights and tail lamps to Audi’s iconic sport coupe, as well as that model’s trademark aluminum fuel-filler cap. The concept’s cabin will pull even more TT cues from the parts bin with sources saying that the two interiors will be virtually identical. A TFT display will reside ahead of the driver, which will feature infotainment normally shown on the centre stack-mounted screen.

Behind its stylish new grille, this TT-borne crossover concept will likely get the same plug-in hybrid powertrain with its 2.0-liter turbocharged four-cylinder engine that came with the Allroad Shooting Brake Concept, including its over the top 408 horsepower and 479 lb-ft of torque output. Much of that power comes from the hybrid powertrain that will include a new inductive battery charging system dubbed “Audi wireless charging,” said to be slated for series production. The new concept will also sport Audi’s dual-clutch automated manual gearbox with steering-wheel paddle shifters.

The new crossover concept will roll on 21-inch alloy rims made of an “intelligent material mix,” says Audi, which includes a carbon-fibre composite material. In a retro twist, Audi will incorporate a set of LED headlights into the design that will look similar to the conventional headlamps used on the original 1980 Quattro, which means that this Beijing concept will forgo the laser headlights that the Ingolstadt-based brand promises will be included in series production model to debut before the end of 2014.
©(Copyright Canadian Auto Press)
Car Shopping Tools