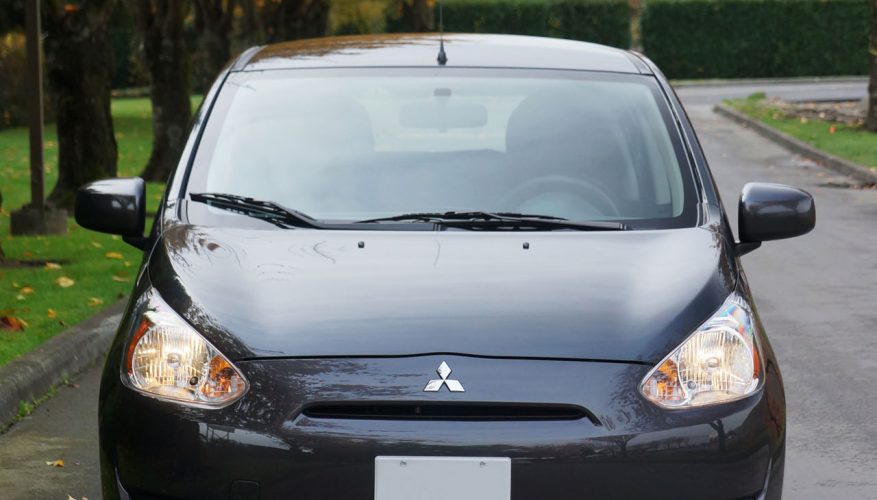 I was in Manila recently, where the tri-diamond badge showed up on everything from taxicabs to delivery trucks, not to mention many Filipinos’ personal rides including my girlfriend’s brother’s brand new Mirage hatchback. While the Mirage feels small by Canadian standards, in the Philippines it’s average sized. Certainly they have large cars there too, even full-size pickup trucks, but most people drive subcompacts. Fuel prices are about the same as they are here and their household income levels are much, much lower than ours, hence the need to be thrifty, and what’s more the especially important requirement of making sure the car they’re buying stands the test of time.

Philippine roads aren’t as smooth as most of ours, especially outside of the city, so cars need to be capable of withstanding regular punishment. That’s one of the reasons Jun purchased the Mirage. It might be small, but it’s tough. It’s also fun to drive, something that was easy to see on his face while he piloted the car around crowded Manila streets. We might look for a winding backcountry road to truly enjoy the performance of our cars here in Canada, but in a city that makes Toronto feel like a village you’ll find plenty of reasons for quick reaction. Cars constantly dart here and there and pedestrians are everywhere, making agility critically important.

In my hometown of Vancouver, which is one-tenth the size of greater Manila, driving is comparatively easy and there are plenty of snake-like two-lane roadways to truly open up a car to see what it’s capable of. Let’s start off by saying the Mirage was never intended to be a sports model, but rather a practical daily runabout. Just the same, as tested in sportier SE trim it’s a lot of fun through the corners in a classic economy hatch sort of way. I grew up driving cars like this one, and its throwback levels of acceleration are quite charming.

To be clear, the SE designation doesn’t allot for more power under the hood, but rather the same 1.2-litre three-cylinder engine drives the front wheels in both trim levels. Three-cylinder? Yes, you heard me right. The engine only makes 74 horsepower and 74 lb-ft of torque, so fully load up a Mirage with its maximum capacity of five passengers plus 487 litres of cargo (which incidentally is very good) and you’ll feel it. Fortunately when only one or two are aboard the featherweight 930-kilo (2,051-lb) mass of my fully loaded SE CVT tester made for decent performance off the line, although some might enjoy the five-speed manual more, and not just because it weighs 25 kilos less. It’s hard to knock the CVT, however, as shifts were nonexistent and therefore the transmission is incredibly smooth. In my notes I said, “I’d choose this car with the CVT over the five speed manual any day.” While the manual I previously tested is a little more fun to drive, despite a little sloppiness in the shifter, the CVT gets up and goes as quickly as you probably needed to around town, although I’d be careful about attempting to accelerate quickly to run any yellow lights or for that matter trying to sneak into a highway’s fast lane when standing still in the slow lane. The engine makes a real putt-putt sound when idling, vibrating so much that I had to turn it off during the photo shoot in order to get clear detail shots, but when on the road and better yet if you don’t try to drive it too quickly it’s quite smooth and fairly quiet.

We all know how efficient CVTs are too, my tester good for a Transport Canada EnerGuide claimed rating of 5.3 L/100km in the city, 4.4 on the highway and 4.9 combined, whereas the manual gearbox is only estimated at 5.9 city, 4.6 highway and 5.3 combined. Of course, real-world economy is never so optimistic. For mileage closer to reality we turn to the U.S. EPA system’s metric-converted claims of 6.3 L/100km city, 5.3 highway and 5.9 combined for the CVT and 6.9, 5.6 and 6.3 for the manual. The Canadian numbers are useful for comparison purposes, mind you, something Mitsubishi would love you to do as the Mirage stacks up very well against rivals.

The SE model’s 14-inch aluminum wheels on 165/65R14 all-season tires would have looked impressive in my youth, but seem pretty small by today’s standards. They grip well enough through tight corners though, the Mirage hatchback’s tall, narrow body displaying a fair amount of body lean during the process. Again, it was never intended to be a hot hatch, but I’m guessing it’ll be fun enough for most entry-level consumers’ tastes.

And entry-level it is, with the lowest price tag of any 2014 model at $12,498 plus $1,450 for freight and pre-delivery prep in base ES trim. For that money you get a fairly rudimentary car as you might expect, but it’s not without amenities. You’ll have to lock each door individually and then slide the key into the door slot to lock the Mirage up, but when inside you won’t have to roll down the front windows; although on hot summer days you’ll need to power them down and those in back will have to rotate the classic black handle fixed to each door panel, as there’s no standard air conditioning. On the other hand there’s a standard 140-watt four-speaker AM/FM/CD/MP3 audio system with speed compensating volume and equalization, as well as auto-off headlamps and even a multi-information display, while the rear seats will split and fold 60/40 for longer cargo.

Move up to the SE and the base model’s steel wheels with covers are replaced with the aforementioned aluminum wheels, while front fog lamps enhance the look, automatic climate control goes a step further than mere air conditioning, the rear windows are powered, power door locks with remote entry make unlocking and locking up a much easier task, the mirrors are powered, heated, folding and boast body-coloured caps, and the front seats are heated too, the driver’s of which is six-way adjustable.

Those seats really shouldn’t have been so comfortable in a car priced so low, and they looked great too, with attractive purple on black upholstery in a nice check pattern. The rest of the interior is pretty basic, but there’s some classy aluminum finished detailing around the vents and speedometer dial as well as on Mitsubishi’s steering wheel hub-mounted logo, plus on some of the stereo panels and the shifter surround, while the door handles are chromed and audio HVAC interface panel covered in high-gloss piano black lacquered plastic. The steering column-mounted stalks felt very high in quality and the automatic air conditioning works well while the audio system sounded great. The seat heaters were an unexpected option with cloth seats and they warmed up extremely fast and actually got quite hot (my notes saying: “These might be the hottest heated seats ever!”), but flip up the sun visor quickly and it twangs into the roof with the nice tinny sound of thin insulation next to metal. And why would Mitsubishi give us a press car in almost top-tier trim without Bluetooth hands-free?

It’s true, you can option either the ES or SE model with parking assist sensors for $595; an LED Illumination Package for $295 that adds blue LED floor and console lighting; a $795 Exterior Package that adds front and rear bumper extensions as well as side sill extensions for a sportier look; and a $395 Protection Package that includes body side mouldings plus front and rear mudguards; but there’s no available Bluetooth hands-free on the base model. Who are they selling this car too? Even retired folks in nursing homes use Bluetooth-equipped devices these days, and I’m willing to bet that just as many young single students and small families looking for a good second car will put the Mirage on their shopping lists as empty-nesters on fixed incomes. These people live wirelessly and a car that won’t readily accept their smartphones won’t be readily accepted. If you need hands-free phone connectivity you’ll need to upgrade to the $15,398 (plus freight) SE and then add on the $500 Convenience Package that includes Bluetooth 2.0 with streaming audio and USB input with voice control, plus cruise control, steering wheel-mounted cruise and audio buttons, as well as a leather-wrapped steering wheel and gearshift knob. The only other option is the CVT gearbox at $1,200, and I suppose optional paint at $160.

As a final note, I like this car in the optional Thunder Grey Metallic it came in, an understated and classy shade, not the Kiwi Green Metallic we tested previously. I don’t want everybody pointing at me when I drive by saying, “Look! That guy just bought the cheapest car in Canada!” Then again that’s my overdeveloped ego, not yours. You might not care what anyone else thinks at all, or possibly get a thrill out of being seen as smart and thrifty, the person who bought a great little car that gets you where you need to go in a modicum of style and plenty of comfort, for a price that can’t be beat and running costs that are also wonderfully low. That it also comes with the best warranty in the business at five years or 100,000 kilometres of comprehensive coverage and 10 years or 160,000 km on the powertrain is a bonus that could otherwise cost you thousands from a third party warrantor.

If you need good, reliable, practical transportation that’s also plenty of fun in a classic, retrospective sort of way, take a ride in a 2014 Mitsubishi Mirage. Like my girlfriend’s brother Jun, it will likely put a smile on your face.