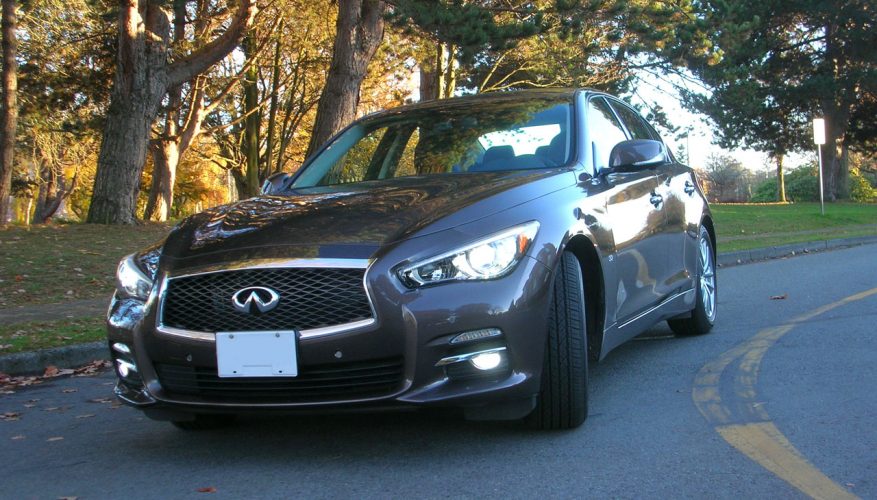 By: Simon Hill
Shakespeare wrote that “A rose by any other name would smell as sweet,” and in the case of the all-new Q50 you could argue that, “An Infiniti by any other name would be as fleet.” That’s because despite its new moniker, refreshed bodywork, and updated mechanicals, the 2014 Q50 is essentially the latest generation of Infiniti’s well-known G37 luxury sport sedan.

It’s a car that has traditionally gone up against the likes of the BMW 3 Series, Cadillac ATS, Mercedes-Benz C-Class and Lexus IS, and in addition to the new name for 2014 Infiniti has given the Q50 fresh styling and a big dollop of new technology to help keep it in the competitive fray.

Stylistically it’s more sculpted and aggressive looking than the G37, with squat haunches, swept-back headlights and more than a hint of Lexus spindle in its grille. Personally I like the look, and was happy that the test car was painted something other than the ubiquitous grey, black, white or silver: in this case a pleasing Chestnut Bronze that appeared alternately lighter or darker depending on the lighting.

The Q50 lineup includes rear-wheel drive or all-wheel drive versions. Rear-drive cars come in base or Sport trim, and AWD cars come in Premium or Sport. There’s also a hybrid that’s marketed separately. My test car was the AWD Premium version, kitted out with the optional Deluxe Touring and Technology Package (more on that later).

No matter what trim level you select, the Q50 is motivated by a 3.7-litre DOHC V6 that churns out 328 horsepower and 269 lb-ft of torque and is hooked up to a seven-speed automatic transmission. It’s a potent powerplant that’ll hustle the 3,787 kg AWD model from 0-100 km/h in about 5.8 seconds, and make easy work of city and highway traffic. The downside, in my experience, is that the engine’s enthusiastic response is matched by a fairly healthy appetite for fuel: My test car was showing a reasonable longer-term average of 10.8 L/100km when I picked it up, but I got far worse consumption in mostly city driving, using nearly 16 L/100km, so by the time I dropped it off it was showing an average consumption of 11.4 L/100km.

I suppose I could have done better had I availed myself of the Selectable Driving Mode’s "Eco" setting (which alters the transmission shift points and engages the Eco pedal to press back on your right foot anytime you delve deeply into the throttle), but I preferred to leave the car in Normal mode most of the time, switching to Sport mode whenever my own enthusiasm dictated a more aggressive driving style.

Unfortunately, while the Q50 was more than up for a little bit of spirited driving, Infiniti doesn’t see fit to equip AWD Premium models with paddle shifters, and the available manual-shift mode on the console shifter is the reverse of what I’m used to, which somewhat curbed my enthusiasm (I grew up with motorcycles, so BMW’s push-to-downshift, pull-to-upshift arrangement makes more intuitive sense to me than Infiniti’s push-to-upshift, pull-to-downshift setup).

Further curbing my enthusiasm was Infiniti’s fly-by-wire Direct Adaptive Steering system, which came bundled as part of the test car’s Deluxe Touring and Technology Package. The theoretical advantages of this system are that it can provide a steadier steering experience over uneven roads, and that it allows the driver to customize the steering to a greater degree, selecting not just the weight of the steering but also the ratio, with the choice of Quick, Standard, and Casual ratios.

There are redundant electronic controllers and a clutch that’s supposed to revert the system to a backup direct mechanical control in the case of complete power failure, so my issue isn’t really regarding the slightly unnerving concept of having the car in control of the steering while I just crank on the automotive equivalent of a game controller (okay, I do have slight issues with this, but…). More to the point, I found the fly-by-wire steering to be entirely artificial and numb feeling, and too twitchy by far in the dead-ahead position except in Casual mode, which has the disadvantage that it’s even more numb feeling than the other modes.

I also found that the car would sometimes feel like it was hesitating for just a fraction of a second before translating my inputs at the controls into actions at the wheels. I don’t know whether this has to do with the fly-by-wire steering, the stability control system, or the Active Trace Control (which "adjusts vehicle braking and engine torque to help enhance cornering feel"), and it’s not noticeable except when driving the car near its limits, but that meant that when it did crop up it was more than a little unnerving. There’s nothing like charging hard into a sweeping off-ramp lined with Jersey barriers, cranking on the steering wheel, and having the car respond in a manner that initially feels nothing at all like actually biting into the pavement. I’m certainly not alone in my negative impressions, as a quick review of enthusiast forums reveals that Direct Active Steering has received numerous complaints from Q50 owners, and has been subject to various service bulletins.

Personally then, I’d opt to save $5,700 (the Deluxe Touring and Technology Package rolls together the $3,000 Deluxe Touring Package, $1,400 Navigation Package, and $1,300 Technology Package) and do without the Intelligent Key memory functions, Around View Monitor (as much as I love that particular piece of technology), maple wood trim, adaptive lighting system, blind-spot warning system, back-up collision intervention, forward collision warning, lane departure warning, and lane departure prevention systems. For less money I’d prefer the conventional electric power steering that comes standard in the Q50, and thankfully you can get the navigation system separately, as it’s the only really important piece of technology for those of us who believe the driver should be doing the driving.

Whether or not you opt for all of the Q50’s advanced available technology, you certainly do get its well-appointed standard luxury. The Q50 AWD Premium gets roomy and supportive leather-upholstered seating, an eight-way power driver’s seat, dual-zone climate control, heated front seats, a heated leather-wrapped steering wheel, power sunroof, 14-speaker Bose audio system, Infiniti InTouch applications, dual-screen infotainment interface, Bluetooth hands-free connectivity, rearview monitor, cruise control, intelligent key, a big 382-litre trunk … and one could go on for quite some time. The overall effect is convincingly luxurious and properly comfortable.

At least, it’s properly comfortable provided you’re at ease with technology, because even without the additional packages the Q50 is one of the most technology-rich vehicles around. I’m somewhere in the middle when it comes to technological fluency, so while I certainly appreciated some of the Q50’s rich capabilities I also found myself a trifle overwhelmed at times by all the buttons and menu layers. Those who are entirely at ease with smartphones and related technology will no doubt revel in the ability to customize the Q50’s various controls and parameters and to connect their digital life – including things like Pandora, Google search, Facebook and such – to their in-vehicle experience.

The Q50 starts at a base MSRP of  $39,495 destination included for the base RWD model, with the RWD Sport model going for $49,945 destination in. All-wheel drive models start at $45,395 including destination for the Premium and $49,445, destination in, for the Sport. With its Deluxe Touring and Technology Package my test car had an as-tested price of $51,095. For that money you get plenty of straight-line performance, competent handling, and leading-edge connectivity wrapped up in a luxuriously stylish package. It’s a different approach to the segment than that personified by the Q50’s restrained German rivals, and likely to be especially appealing to those who put a premium on technology.
©(Copyright Canadian Auto Press)
Car Shopping Tools