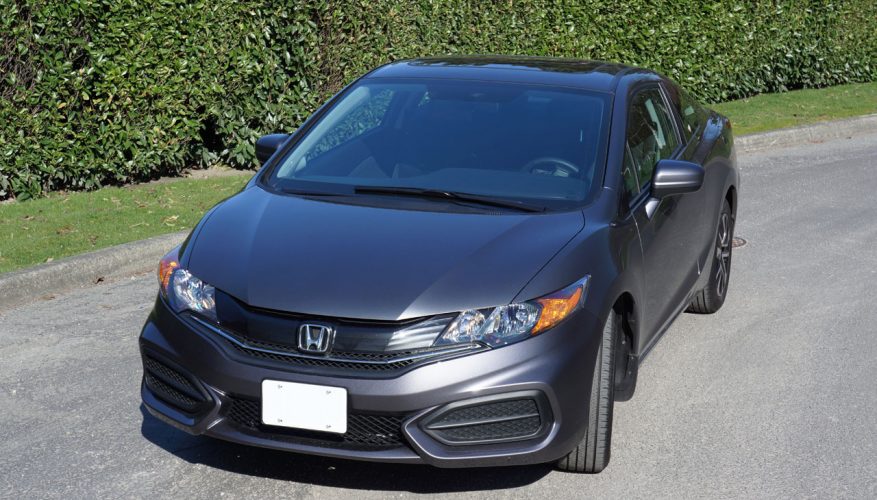 By: Trevor Hofmann
Last year, Honda surprised everyone by introducing an almost completely redesigned Civic Sedan after only one year of a complete redesign, the 2012 model lambasted by the press and public for not measuring up to the brand’s usual high style, quality and handling performance. The Civic Coupe didn’t come under as much criticism and therefore continued on unaffected for 2013, but Honda decided to give it a rather thorough update for 2014 just the same. We now have a very different looking two-door in Honda’s compact lineup.

The styling changes are obvious, the new model getting a completely reworked front fascia including the replacement of the more traditional trapezoidal-shaped vented upper black mesh grille with a thick dark grey strikethrough featuring thin upper ventilation just above and two narrow vented grille openings underneath, bisected by a narrow chrome strikethrough. There’s a new hood too, as well as new front fenders that meld into a new sharper headlight design, while a more prominent bumper dips deeper at centre, overtop a large mesh grille integrated into the lower fascia, bookended by aggressive looking faux vents; the fog lamps with chrome strikethroughs from the EX-L Navi look better here, but aren’t available in my tester’s EX trim. New side mirrors and new wheels update the coupe’s profile, while revised taillight lenses over a new rear bumper finish off the rear end. If you’re a traditionalist you might like the old design better as it’s a bit more conservative, but if you like things swoopier and more aggressively penned, this is your two-door ride.

Inside, the look is much the same as every other Civic Coupe has been for many years. A two-tier primary gauge package sits overtop the steering wheel, the digital speedometer, fuel gauge, real-time L/100km estimator, and multi-information display hovering above in the top tier while the large tachometer, gear indicators, mph-km/h button, trip odometer button, Eco info and warning symbols are lit up below. The leather-wrapped steering wheel, standard in my EX tester looked identical to that in previous Civics, as did the excellent backlit button and dial-shaped switches on the metallic black gloss surfaced spokes, the HondaLink phone and voice activation controls hidden on the outside of the steering wheel hub above your left knee. It’s a redundant interface that works extremely well, seamlessly connecting through to the multi-information display or the extremely upscale looking new seven-inch infotainment system housed on the upper portion of the centre stack. The latter is surrounded in piano black plastic lacquer, and while I’m not a big fan of this stuff due to dust magnetism and its propensity to easily scratch, on the rare occasion that it stays clean it melds into the glossy touchscreen’s display perfectly.

Honda calls the infotainment interface a Display Audio System despite it doing much more than just adjust the stereo, with all features found easily by pressing the touch-sensitive “HOME” button on the upper left. Below that is a touch-sensitive volume control that can be a bit finicky, so I resorted to the left-side steering wheel controls for audio access, while a “MENU” button resides on the bottom left for additional system access. It’s a bright and clear display that immediately modernizes the Civic’s interior, and when optioned with navigation, as I experienced in my Civic Sedan Touring tester the week before, offers even greater functionality. As you might have guessed, the aforementioned EX-L Navi is the trim level needed to get navigation in the Civic Coupe, or you can step up to the much sportier Coupe Si. Just below the infotainment screen is Honda’s very impressive automatic climate control system in EX models and above, and below that a set of two-way seat heater rocker switches. Hidden in a binnacle at the very bottom is an HDMI slot (standard on EX models and above), a USB plug and 12-volt power outlet, while my tester’s automatic gear lever (surrounded in more shiny metallic grey plastic) and a set of cupholders occupy the lower console.

No matter which trim level you choose, the 2014 Civic Coupe offers a nicer interior than its predecessor. For instance, Honda has gone back to soft-touch door uppers, lending a comfortable padded surface for resting elbows on if you’re tall enough to take advantage. Take things upscale a step further is a new soft padded dash insert ahead of the front passenger, just like Honda included with last year’s updated Civic Sedan. As with all Civics, the front seats are very comfortable and quite supportive, while I certainly had no difficulty finding just the right driving position thanks to standard six-way driver’s seat adjustment. Those in the rear might be surprised at just how much headroom can be found under its steeply raked back glass, my five-foot-eight frame fitting in with lots of room to spare, while legroom was more than ample too.

Comfort won’t be a Civic Coupe complaint, especially when shod with the EX model’s 16-inch alloy rims wrapped in 205/55R16 rubber (the base model gets 16s on steel wheels with covers). While the EX-L Navi’s optional 17s on 215/45R17 tires might be a tad firmer over rougher stretches of road, I tested them on the previously mentioned Civic Sedan Touring earlier and never found them harsh in the slightest, and their better road-holding capability and much more attractive styling can’t be argued against. Just the same, I put my EX with its 16s through some fast-paced exercise on a favourite local mountain road, a narrow curving ribbon of tarmac that winds its way out to a tiny seaside community minutes from my home. It felt taut and stable through hairpin corners with hardly any lean, no doubt the result of the car’s fully independent suspension comprising front struts and a multi-link rear setup with stabilizer bars at both ends. The brakes are discs all-round in EX trim and above, with standard ABS featuring electronic brake force distribution and brake assist, while traction control and anti-skid stability control come standard too.

The Civic Coupe can be had with a five-speed manual or optional continuously variable transmission (CVT), the six-speed manual being relegated to Si duty only. My tester came with the CVT, and for regular day-to-day duties it’s an ideally smooth and comfortable companion to the 1.8-litre four-cylinder engine found under the hood. The engine, while only moderately quick off the line due to 129 lb-ft of torque although plenty of fun when speed ramps up thanks to 143 horsepower, loves to rev and thankfully Honda includes a set of paddle-shifters behind the steering wheel spokes in EX and EX-L models fitted with the CVT, which when in Sport mode help to make it almost feel like you’re shifting an engaging set of gears. The only problem is that the variable box inherently slips out of your chosen “gear” when pushing hard, making me lament the exclusion of the five-speed manual that could’ve otherwise been included in this car.

I wasn’t sad when filling it up at the end of the week, however, as the CVT allows for even better economy than the DIY transmission with a claimed Transport Canada EnerGuide rating of 6.7 L/100km in the city, 5.0 on the highway and 6.0 combined in base LX trim, or 6.9 city, 5.1 highway and 6.1 combined in slightly heavier EX and EX-L Navi guise. The manual comes in at an EnerGuide rated 7.3 city, 5.5 highway and 6.5 combined. Considering I rarely find the time to put a car like this through its paces on a winding road I might opt for the CVT just to get the fuel savings, although there’s a premium to be paid at the time of initial purchase.

A base LX with manual gearbox starts off at $18,895 plus $1,495 in freight and pre-delivery preparation charges, while the same car with the CVT will set you back $20,195, or rather $1,300 more. If you simply want an automatic’s ease of use then there’s no question, just pay the piper, but if you’re thinking of opting up just to save money at the pump you might want to first sit down with a calculator and do the math. My EX CVT, incidentally, starts at $22,255 before freight, and the options you might want to consider include an aero body kit, various 16- and 17-inch wheels, body side mouldings, a remote starter, an auto-dimming rearview mirror, all-weather floor mats, an engine block heater and numerous other dealer-installed accessories.

I’ve mentioned a number of features that come standard on the EX and even the EX-L Navi, but have missed many others. Therefore, standard EX features not already mentioned include proximity sensing remote entry with pushbutton ignition, speed-sensing variable intermittent wipers, a rearview camera with dynamic guidelines, a powered tilt and slide moonroof, Siri Eyes Free compatibility, and the HondaLink Assist Automatic Emergency Response System that you hopefully will never need thanks to Honda’s brilliant LaneWatch blind spot display that shows what you can’t otherwise see in the lane to your right on the display screen just ahead.

If you want more I recommend upping the ante to an EX-L Navi that adds leather upholstery, auto-on/off headlights, seven-speaker AM/FM/CD/MP3/WMA premium audio with satellite radio, and a multi-angle rearview camera with dynamic guidelines. And incidentally, all Civic Coupes come very well equipped with the usual powered windows, locks and mirrors, the latter also heated, tilt and telescopic steering, a six-way manual adjustable driver’s seat, heated front seats, six-speaker AM/FM/CD audio (the seventh speaker in the EX-L Navi is a sub), cruise control, an Econ mode button for minimizing energy when using air conditioning as well as other functions, and 60/40 split-folding rear seatbacks that expand the already useful 331-litre trunk.

As far as compact two-doors go, few competitors offer anything that can seriously compete against the Civic Coupe. Now that Honda has upgraded it with new styling, a better interior with the latest tech, and a more fuel-efficient CVT gearbox for those who want to cruise in easy comfort while still looking sporty, it’s a winning package that will be sure to help the Japanese automaker stay ahead of its rivals on the sales charts. If you’re in the market for an entry-level personal two-door, you must drive the Civic Coupe first, as it’s the standard all others are judged against.
©(Copyright Canadian Auto Press)
Car Shopping Tools