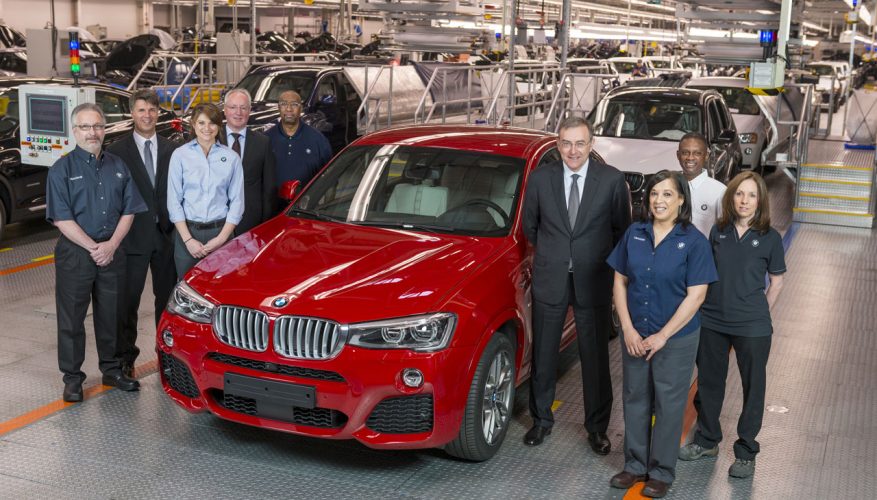 By: Simon Hill
BMW has been on a bit of a roll with new model introductions lately and shows no signs of slowing down. The German brand’s latest new model announcement is also one of its biggest, in more ways than one: BMW has confirmed that it will be introducing a larger sibling to its popular X5 "Sport Activity Vehicle": the full-size, three-row X7. The all-new X7 will be built exclusively at BMW’s Spartanburg plant in South Carolina, and the company will invest US$ 1 billion in the plant to provide the required additional capacity.

“We will expand the plant’s annual production capacity by 50 percent up to 450,000 vehicles by the end of 2016," said Dr. Norbert Reithofer, chairman of the board of management at BMW. "Today’s capacity is around 300,000 vehicles. This investment will also create an additional 800 jobs, increasing the total workforce to 8,800 on site."

The Spartanburg plant is celebrating 20 years of operation this year, and in addition to the upcoming X7, it produces the X3, X4, X5, X5 M, X6 and X6 M. It exports 70 percent of its annual production, making BMW the largest US vehicle exporter to non-NAFTA countries.

"The Spartanburg plant is an important building block in our international network of 28 production and assembly facilities in 13 countries today and makes a vital contribution to profitable, globally-balanced growth,” explained BMW production manager Harald Krüger. “Our US plant is the best example of our successful strategy of ‘production follows the market’."

The X7 is a model that has been expected for some time, but it had previously been put on hold by BMW. Now with SUV sales picking up, momentum in key markets such as the US, and demand for luxury vehicles growing faster than the rest of the market, BMW executives have apparently decided the timing is right.

That said, expansion of the Spartanburg plant is expected to take two to three years, so the X7 won’t likely start arriving in showrooms until 2017 or 2018 according to industry analysts. When it does reach the market, the X7 will give BMW a vehicle to compete with three-row luxury rivals such as the Audi Q7 (and the rumoured upcoming Q9), Mercedes-Benz GL, Infiniti QX60 and Lexus GX 460.
©(Copyright Canadian Auto Press)
Car Shopping Tools