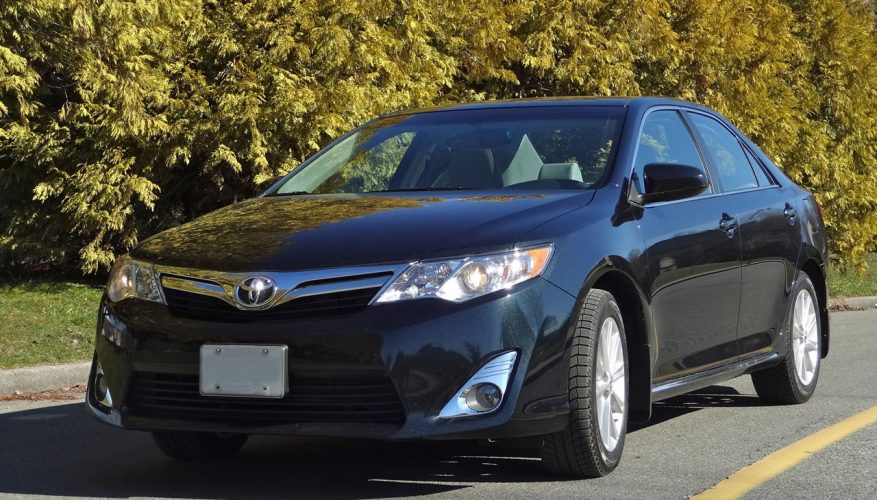 By: Simon Hill
For Toyota’s Camry, the key to success is no secret: the Camry has held onto the number one spot among mid-size North American sedans based on its long-running record of dependability, value, and practicality. But what is perhaps a little bit of a secret these days is just how genuinely pleasant the Camry has become. When Toyota updated the North American Camry with the current XV50 version two years ago, it banished the blandness of previous generation Camrys with a crisp evolutionary design on the outside and a comprehensive overhaul on the inside.

Not wanting to mess with the formula for reliability, Toyota retained the same basic mechanicals under the hood of the current Camry as were found in the previous-generation car, with improved versions of the existing 2.5-litre four-cylinder and 3.5-litre V6 engines (there’s also a Camry Hybrid, which Toyota markets as a separate model).

My test car had the base 2.5-litre four, which develops 178 horsepower and 170 lb-ft of torque and is hooked up to a smooth-shifting six-speed automatic transmission. While the V6 does offer a little extra refinement and torque, the four-cylinder pumps out plenty enough power for comfortable everyday driving, even if you’re in a bit of a hurry. It also offers significantly better fuel economy than the bigger engine, with official Transport Canada city/highway ratings of 8.2 / 5.5 L/100km compared to 9.7 / 6.5 for the V6. My test car was showing a real-world long-term average of just a hair over 10 L/100km in mixed driving, and my own results were about the same.

No matter which engine is fitted, the 2014 Camry gets electrically-assisted power steering and a retuned suspension that offers a more alert, responsive driving experience than the previous generation version. While my XLE test car’s handling stopped short of being exactly athletic, it managed itself with reasonable aplomb and was pleasurable enough to weave through the corners while still maintaining a comfortable, quiet, and refined ride. It all adds up to a pleasant driving experience that’s made better knowing that, barring anything unusual, your car should offer the sort of appliance-like dependability for which Toyota is celebrated.

That said, the current Camry is an appliance that you’ll genuinely enjoy using, especially when decked out in top-of-the-line XLE trim. Styling-wise, the bodywork is somewhat sharper and more angular than previous generations, though it’s still by no means a showy looking car even with my test car’s chrome trim and alloy wheels. Pressed for an opinion, I’d describe it as "elegantly conservative" or perhaps "accomplished looking."

Inside, this Camry is leaps and bounds ahead of older models even in base LE trim, and my top-of-the-line XLE tester was appointed downright luxuriously with attractive tri-colour leather seats, a thick leather-wrapped steering wheel, glossy woodgrain trim, and a combination of chrome and brushed metallic highlights. The door uppers are soft-skinned and the stitched leather-look upper dash panel is all soft-touch as well, as are any of the surfaces you’re likely to come into contact with. Where rigid plastic is used, such as for the centre console and lower door panels, it’s decent looking stuff.

From a practical perspective there’s good legroom and headroom in all seating positions, and a big 436-litre trunk with 60/40 split-folding seatbacks. All the controls are logically placed and fall easily to hand, although I did note that Toyota now puts the navigation system under the infotainment system’s "Apps" button, which makes things a little less intuitive than a dedicated "Nav" button and means you have to actually drill down a layer into the menu system to access the map. For mid-2014 and onward Camrys, a backup camera is now included across all trim levels, but one thing the company hasn’t changed is the florescent LED digital dashboard clock sitting atop the centre stack, which I think may have cycled so far out of vogue by now as to have actually become retro-cool.

As always, Toyota has you well covered on the safety front no matter the trim level you choose: All Camrys are fitted with the expected safety gear such as ABS brakes, traction control, stability control, and a complete array of airbags, plus the Camry also earns "Top Safety Pick" status in the demanding IIHS crash tests. XLE trim further enhances safety thanks to its standard blind spot information system.

The sportier minded SE starts at $28,690 destination in and gets all the features of the LE plus a unique grille, side skirts, 18-inch alloys (the LE has 16-inch steel wheels), a rear spoiler, dual exhaust, fog lamps, sport seats, a leather-wrapped steering wheel and shift knob, paddle shifters, a power-adjustable driver’s seat, auto-dimming rearview mirror, 6.1-inch display audio with satellite radio and navigation, plus a few other features (the V6 SE also gets a moonroof and pushbutton start).

The range-topping XLE, which starts at $32,180 destination in for the four-cylinder version, includes all the equipment on the LE and adds dual-zone automatic climate control, leather seating (heated in the front), woodgrain trim, a leather-wrapped steering wheel, proximity sensing remote access and pushbutton start, an auto-dimming rearview mirror, power-adjustable front seats, 6.1-inch display audio with satellite radio and navigation, rear reading lights, a power moonroof, 17-inch alloy wheels, and fog lights. Pony up $35,245 destination in for the V6 XLE and you also get a further upgraded 10-speaker JBL audio system with a seven-inch monitor.

All in all it’s easy to see why the Toyota Camry remains a strong seller: It represents a thoroughly pleasant and competent driving experience for a great value. Even loaded with all the goodies in XLE trim, it still comes priced within the affordable range for most family budgets, putting efficient, reliable, and well-appointed motoring within achievable reach.

The Camry doesn’t exist alone in its segment, facing formidable competition from rivals including the Honda Accord, Ford Fusion, Mazda6, Volkswagen Passat, Nissan Altima, Chevrolet Malibu, Chrysler 200, Hyundai Sonata and Kia Optima, among others. But no matter how you measure things Toyota’s champion is a worthy contender that ought to be included in any well-considered cross-shopping comparison.