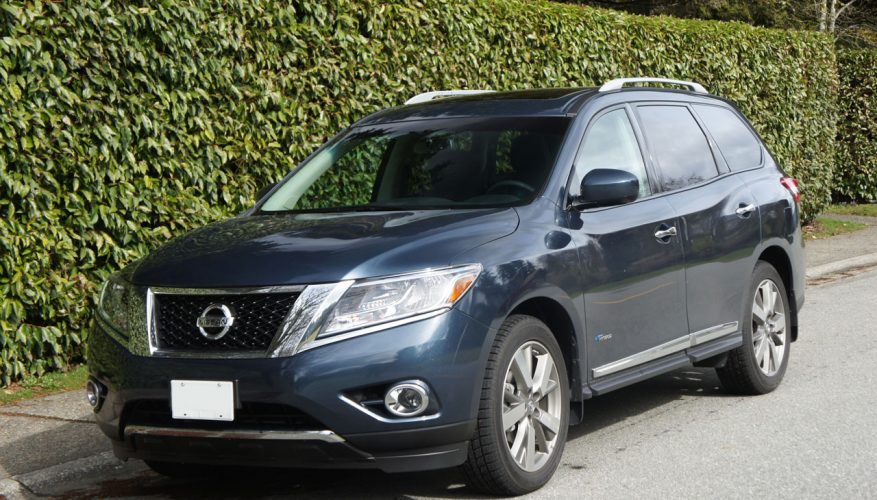 By: Trevor Hofmann
Nissan totally reinvented its Pathfinder last year, moving from a body-on-frame truck chassis to a unibody car-derived platform architecture shared with many of its other offerings, from the midsize Murano crossover and Quest minivan to its midsize Altima and full-size Maxima sedans. These are all front-wheel drive vehicles (well, the Murano is all-wheel drive only here but offered with front-drive in the U.S.), some of which offer all-wheel drive optionally, and all use unconventional although readily more available continuously variable transmissions, the Pathfinder included. While some Pathfinder fans were no doubt upset to lose their beloved off-roader, such buyers are becoming fewer and farther between these days and rather than let go of a nameplate that’s become very well known within SUV circles, Nissan has kept a good name and endowed the large midsize crossover SUV with a little off-road prowess of its own, plus for 2014 an all-new hybrid-electric version.

I suppose I should mention something about the more affordable Hybrid SV, being that you might love the idea of saving at the pump albeit not the idea of spending more than $50k on your next crossover SUV (the Hybrid SV starts at $39,248 plus $1,560 for freight and PDI and the Hybrid Premium begins life almost $10k dearer at $49,198 plus freight), not to mention all of this kit comes standard on the Premium too. Altogether, SV models get Nissan’s proximity sensing Intelligent Key remote access and pushbutton ignition, automatic headlights, a heated steering wheel that’s leather-wrapped as is the shift knob, illuminated steering wheel controls, powered and heated exterior mirrors with reverse tilt, variable intermittent speed-sensitive wipers, tri-zone automatic climate control, an eight-way powered driver’s seat, Bluetooth phone capability, AM/FM in-dash six-CD/MP3/WMA audio with auxiliary audio/video input jacks, a USB port and satellite radio, plus a power liftgate, seven-occupant capacity with Nissan’s fabulously convenient second-row EZ Flex seating system, roof rails, rear sonar, individual tire pressure display, hill start assist, Nissan’s 4×4-i intuitive 4WD system, and more, while items the Premium package replaces that come standard on SV models include an information centre with a seven-inch QVGA colour monitor, a backup camera, six-speaker audio, heated front seats, fabric upholstery, and 18-inch alloys on 235/65R18 all-season tires.

All of these top-tier features come in a cabin that’s plenty upscale, very close to the Infiniti QX60 Hybrid that it shares underpinnings (and just about everything else) with. For instance, its Premium trim means that its leather upholstery is perforated to make way for the air from its ventilated seats, the controls for which are located on a nice uncluttered lower console that’s finished in reasonably realistic looking and even fairly genuine feeling faux wood (the Infiniti gets real wood). The centre stack, in contrast, is ideal for those who like lots of buttons and switches, just like the Q60’s, while the infotainment system, including its fabulous Around View Monitor and great sounding Bose audio comes directly from the Infiniti, except for some of the opening graphics. Likewise for the dual monitor DVD rear entertainment system. There aren’t as many soft-touch surfaces in the Pathfinder, with only the front door uppers, door inserts and armrests wrapped in padding, but the harder plastics are nice in texture and quality, while fit and finish is very good. Nice subtle use of metal trim adds some sophistication inside, but then Nissan goes and locates the heated steering wheel button in an awkward position way down by the left knee (ditto for the Q60) – somewhere closer to the steering wheel or even on it makes better sense as you can’t safely turn it on while driving. On the other hand I loved the bright and clear primary gauges just ahead of the driver, which feature a centre display for hybrid info, pedal back pressure adjustment, various warnings, vehicle settings, tire pressure, etc.

My notes say “silky smooth operation,” which might not be very original from a writing standpoint, but pretty well sums up what the Pathfinder Hybrid is like to drive. Just the same, power is excellent from standstill to highway speeds, almost as strong as the V6 with a total of 230 net horsepower and maximum of 243 lb-ft of torque, the latter available from 3,600 rpm (the 3.5-litre V6 makes 260 horsepower and 240 lb-ft of torque that arrives at 4,400 rpm). Of course, electric motors make 100 percent of their twisting power at zero rpm, so its 15 kW electric motor really helps it to get up and go quickly, the lithium-ion battery being fed juice from the supercharged 2.5-litre four-cylinder engine with continuously variable valve timing control, as well as regenerative brakes.

The result of all this technical wizardry is a LEV2 ULEV emissions rating and very good fuel economy, claimed to be 7.4 city and 7.1 highway by Transport Canada’s EnerGuide system, which we all know is terribly inaccurate, or more realistically estimated at 9.4 city, 8.7 highway and 9.0 combined if using a metric-converted U.S. EPA rating. The good news is our Canadian system will be updated for the next model year, so we won’t have to look south of the border in order to figure out how a car will fit into our budgets. Incidentally, the regular V6-powered Pathfinder is EnerGuide rated at 10.5 city and 7.7 highway, or EPA rated at 11.8 city, 9.0 highway and 10.7 combined, so if you primarily use your SUV on the highway you’re not going to save a lot of fuel with the Hybrid, but then again that regular Pathfinder is only front-wheel drive and 272 kilos (600 lbs) lighter than my Hybrid Premium tester, so if you want to compare apples to apples the all-wheel drive V6-powered Pathfinder uses a claimed 10.8 city and 7.9 highway on the EnerGuide system or 12.4 city, 9.4 highway and 11.2 combined when rated by the EPA. An additional bonus is the requirement of cheaper regular unleaded fuel no matter the Pathfinder powerplant chosen.

Handling is good for this size of vehicle. I wouldn’t go so far to say that the Pathfinder Hybrid (or any other Pathfinder) is sporty, but its independent front strut and rear multilink setup feels solid around corners and is a dream on the highway, where it plants itself nicely even when loaded with passengers and cargo. Safety is taken care of by four-wheel discs with ABS, electronic brakeforce distribution and brake assist, plus traction and stability control as well as the regular assortment of airbags.

You might remember that you can add six passengers along with a driver, the third row even roomy enough for adults, while accessing that third row is extremely easy due to Nissan’s EZ Flex second row seats that are a wonder to operate, flipping up, down or sliding forward and back in a snap, and even capable of making enough room to climb behind if a child seat is attached to the second row bucket (just make sure to remove the child). It’s just as useful for cargo as the regular Pathfinder too, thanks to 453 litres behind the rear seats, 1,201 litres behind the second row, and 2,260 litres behind the front row, plus there’s a handy hidden bin under cargo floor that’s partially take up by the Bose sub in top-line Premium trim. If you plan to tow, the Hybrid isn’t quite as good as the regular V6-powered Pathfinder with only 1,588 kilos (3,500 lbs) of capacity compared to 2,273 kg (5,011 lbs), although the Hybrid Premium model comes standard with a tow hitch and seven-pin wiring harness.

Heavy stuff in mind, the Pathfinder Hybrid does have a standard four-wheel drive system, which interestingly isn’t like the full-time all-wheel drive systems that rival crossovers offer, but rather there’s a console-mounted dial that lets you choose between 2WD, Auto (which will choose between 2WD and 4WD depending on what’s required), and 4WD Lock, which locks in 4WD so you can climb in and out of slipperier, slimier and generally less stable terrain. What’s more, the Hybrid’s ground clearance is 15 mm higher than the conventional Pathfinder’s at 180 mm (7.0 inches) compared to 165 mm (6.5 inches), so any obstacles in its way are easier to overcome.

Yes, it’s odd to hear that a hybrid version of an SUV might be better off-road than the conventionally-powered alternative, but along with better fuel economy such is the case with the Pathfinder Hybrid. The deciding question always is, however, does the price difference between the regular Pathfinder and Pathfinder Hybrid make the move upward worthwhile? As mentioned, the Hybrid SV starts at almost $41k with freight with the Hybrid Premium at almost $51k, whereas the same vehicles (less the LED taillights) with conventional powerplants will set you back almost $37k and nearly $47k, for a difference across the board of about $4,000. Folks, that’s not a lot to spend for hybrid technology, and can be paid back if you’re forced to endure a lot of slow moving start and stop city traffic or sluggish commuting on clogged highways. Factor in there’s some feel-good green benefits to your local environment in reduced emissions and it might push you into the Pathfinder Hybrid camp, and then remember that the Pathfinder Hybrid offers similar performance and just as much functionality as the regular Pathfinder and it could start making sense for you. Nissan certainly has created an impressive vehicle here, and priced it so that it’s not as much of a stretch to go green as some of its rivals.
©(Copyright Canadian Auto Press)
Car Shopping Tools