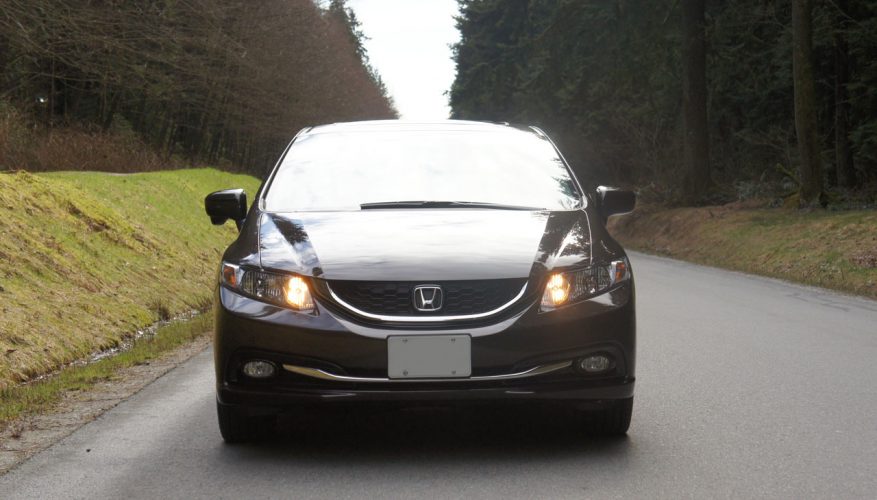 By: Trevor Hofmann
What a difference a couple of years makes! Honda took a disappointingly redesigned 2012 Civic, completely overhauled it one year later for the 2013 model year with new front and rear styling, a reworked suspension and totally upgraded interior, and now for 2014 moved the car up a significant notch further with the introduction of top-tier Touring trim.

At first sight I was impressed with its classy chocolate brown metallic paint scheme, highlighted by fog lights, halogen headlights (that incidentally include auto-on/off), lots of chrome trim and gorgeous bright metal and black-painted 10-spoke 17-inch alloy rims on 215/45R17 rubber. It’s a sporty looking little four-door, but at the same time it’s endowed with a certain refined elegance that the majority of cars in its compact sedan class can’t even come close to emulating.

Climb inside and that elegance factor is taken to an entirely new level. Soft-touch door uppers in front and a soft touch dash insert on the passenger side were new last year, while the updated take on Honda’s innovative split digital primary gauge package was carryover from 2012, as was the fabulous red start/stop button in higher-grade models. Likewise for the nice quality woven fabric roofliner, which seamlessly edged my tester’s power tilt and slide glass sunroof. I don’t remember the leather-wrapped steering wheel being this good, however, although its brilliantly designed circular multifunction buttons are carryover items that I gladly enjoyed using. What’s more, the Touring model’s leather upholstered seats are not only great looking, but some of the best in the compact segment. Truly, I had a certain German competitor in my home fleet during the Civic Touring’s test week, and its seats felt squishy and uncomfortably unsupportive, even qualifying for the old grandma’s sofa comparison. The Civic Touring’s driver’s seat supported in all the right places, especially lumbar, and its eight-way power adjustability meant it was easy to find exactly the right position for comfort even after a day’s drive. All the switchgear feels very upscale, while the metallic silver finished handbrake seemed as solid as those in premium cars and so much nicer to use than a foot-operated or electronic one.

The most impressive new feature in the Civic Touring model is its navigation-infused infotainment system, as good as this class gets and really attractively laid out while nearly seamlessly integrated into the dash. I’ve since learned that this system is now available in EX trim too, albeit without navigation, so get ready for a new and improved user interface in mid-grade, top-line luxury and even sporty Si trim. Connectivity is another Civic highpoint, with USB and HDMI outlets set into the lower portion of the centre stack of upper level trims, and Honda’s HandsFreeLink Bluetooth wireless phone system is now ultra-easy to set up and worked flawlessly during my test week.

Roominess up front won’t be a problem even for tall drivers and passengers, and the same goes for rear seat passengers. It’s accommodating enough for two large adults, while three regular sized folks can fit without a problem. The Civic’s trunk isn’t the biggest in its class at 353 litres, although it comes standard with 60/40 split-folding rear seatbacks that work wonders for longer and otherwise awkward fitting items.

Out on the road the Civic Touring is a lot sportier than its luxury accouterments suggest, although those aforementioned wheels and tires should hint to the contrary. By saying that it’s sporty I’m in no way insinuating that it’s rough riding, however. The Civic’s ride is excellent, its independent front strut and multi-link rear suspension soaking up bumps and potholes without the hard jarring that compact models are often known for. When the curves come, mind you, front and rear stabilizer bars help it transform from comfortable cruiser to serious contender, the Civic Touring even out-handling that German competitor I spoke of before. Its motion-adaptive electric power-assisted rack-and-pinion steering feels quite direct and linear, unlike some competitors’ EPS systems, and the Civic’s ventilated front and solid rear disc brakes (available on EX trims and above) make a big difference during spirited driving, although they’re not meant for serious performance, fading noticeably after repeated stomps, unlike those in the Si.

The Touring uses the same 16-valve, SOHC, 1.8-litre, i-VTEC four-cylinder engine that comes in the base Civic. It delivers ample output at 143 horsepower and decent levels of torque at 129 lb-ft, produced in Honda’s trademark fun-loving rev-happy way. It makes all the right sounds too, while the standard continuously variable transmission does a pretty good job of mimicking a conventional automatic by kicking down a “gear” when needed, especially when set to Sport mode. Just the same the CVT was its biggest drawback when pushed hard through the corners, never really finding the optimal position to maximize the engine’s power when coming out of a curve, making me crave this car with the six-speed manual offered in the wonderful Si, or even the five-speed manual offered in lower trims. This said I’ve now driven the same CVT in the Civic Coupe, and that car comes with a set of shift paddles that let you hold a gear amid corners, making all the difference when in Sport mode. Maybe Honda could consider paddles for this Touring model too? When driven in a more relaxed state, how I presume most Civic Touring customers will pilot the car most of the time, the CVT comes near to perfection, delivering quiet, seamlessly smooth operation.

The CVT also helps with fuel economy: the Civic, so equipped, good for a claimed Transport Canada EnerGuide rating of 6.7 L/100km in the city, 5.0 on the highway, and 6.0 combined. While good for comparison purposes, a more accurate real-world estimation is the U.S. EPA system that rates the Civic CVT at a metric-converted 7.8 L/100km city, 6.0 highway and 7.1 combined. Either way you look at it, the Civic is extremely economical.

While tooling around town or blasting down the highway, some of the Civic’s optional features come in very handy. For instance, flick on the right turn signal and a camera hidden within the mirror’s post displays the right-side blind spot on the infotainment screen. It’s called LaneWatch blind spot display and is standard on Civic sedans in EX, Touring and Si trims. Other standard EX and above features include the aforementioned proximity key remote entry system with pushbutton ignition, leather-wrapped multi-functional steering wheel, HDMI (High-Definition Multimedia Interface) input, and power moonroof, while other EX and above features include automatic climate control with air-filtration, speed-sensing variable intermittent wipers, tweeters added to the audio system, the HondaLink Assist automatic emergency response system, and Siri Eyes Free compatibility. An LX and above feature worth highlighting is text message functionality, particularly impressive for this class, while Touring features not yet mentioned include a multi-angle rearview camera with dynamic guidelines and six-speaker AM/FM/CD/MP3/WMA audio with satellite radio. All of these top-tier features along with many more from lesser trim levels not even mentioned, such as standard ABS-enhanced brakes, traction and stability control, plus a full load of airbags, costs a very reasonable $24,200, as well as $1,495 in freight and pre-delivery prep charges. You can get a more simply equipped Civic Sedan for quite a bit less, of course, the base DX model starting at $15,690 plus freight, while popular mid-grade EX trim can be had for $20,500.

As you’ve probably gathered, I’m once again a Civic believer. Honda has done such a good job improving this car over the past couple of years that it’s not only miles better, but is now one of the best in its compact class.
©(Copyright Canadian Auto Press)
Car Shopping Tools