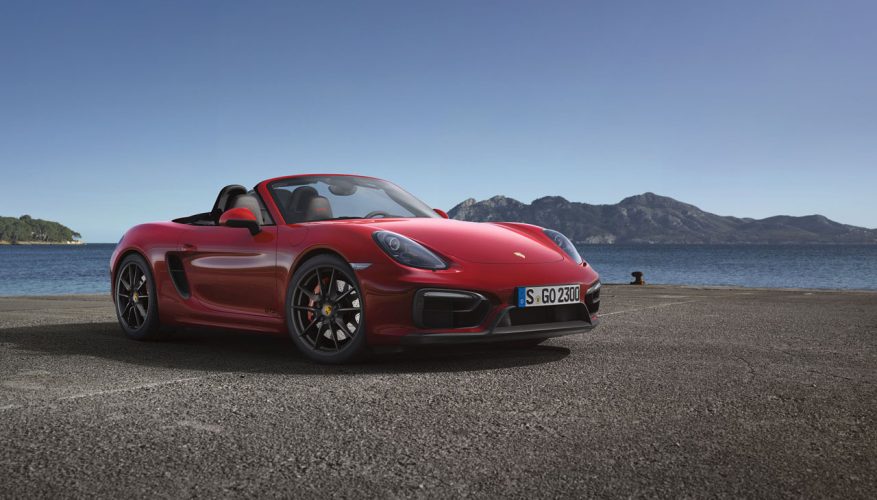 By: Trevor Hofmann
With Audi having long offered four-cylinder entry-level engines and BMW more recently returning to do likewise, it only seems natural that these German brands’ slightly more upscale rival Porsche get back into the four-pot act.

The latest information from industry insiders Automotive News is that the Stuttgart firm will supplant the current 2.7-litre horizontally-opposed six-cylinder engine with a new boxer four in its base Boxster roadster and Cayman coupe models. The current Boxster and Cayman engines make 265 and 275 horsepower respectively, with torque rated at 206 and 214 lb-ft. While significant output compared to the original 1997 (986) Boxster’s comparatively conservative rating of 201 horsepower, the new four-cylinder should be more enticing still. According to Porsche boss Matthias Muller, the new four could produce as much as 395 horsepower in top trimmed models, which is even more than the 340-horsepower offered in the brand’s latest greatest Cayman GTS model.

In case you think that Porsche is setting a new precedent with the announcement of a four-cylinder engine, it wasn’t that long ago that such was considered normal in cars coming out of Zuffenhausen (and Neckarsulm), the last 944 model to roll off the ex-NSU line that also built the V8-powered 928 in 1991, and the final 968 (a modified version of the Audi-powered 924 that actually began as a future Volkswagen sports car before being sidelined by the early ’70s oil crisis and then replaced by the more efficient Scirocco) in 1995 from the automaker’s Stuttgart facility. Before these front-mounted water-cooled inline fours became popular, Porsche built the mid-engine 914, also powered by four-cylinders, as well as the 911-bodied 912, a four-pot car as well. If you delve deeper into Porsche’s past you’ll find classics like the beautiful 718, the equally gorgeous 550 Spyder and of course the original 356, all powered by four-cylinder engines. With such a long history of four-cylinder performance, no one should turn a nose up at a flat-four-powered entry-level Porsche.
©(Copyright Canadian Auto Press)
Car Shopping Tools