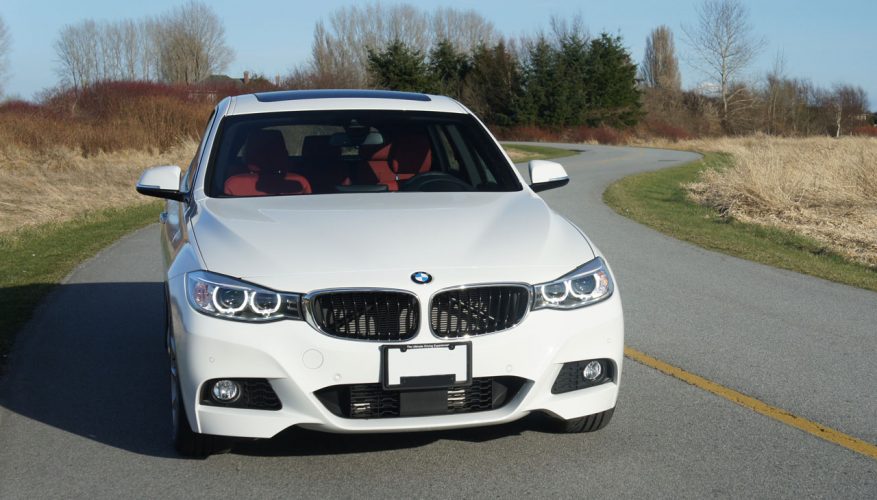 By: Trevor Hofmann
Have you taken a look at BMW’s incredibly diverse lineup these days? Its 3 Series and new 4 Series say it all. If you haven’t heard yet, the 4 Series is an updated version of the old 3 Series coupe, convertible and new four-door Gran Coupe endowed with a new numerical designation, which means that they use the same underpinnings as the four-door sedan and five-door liftback 3s. Tally the total of 3 Series sedan, Touring (wagon) and this Gran Touring (hatchback) I’m covering here, along with the X3 crossover, and then add in the 4 Series Coupe, Cabriolet (convertible), four-door Gran Coupe, and the sporty new X4 crossover coupe, and there are a total of eight body styles being built upon the back of the 3 Series, a line that only comprised two to three body styles back in its earlier years. How times and tastes have changed. The 3 Series Gran Touring fits into this menagerie perfectly.

Truly, along with its arguable good looks and enviable performance, my 2014 BMW 335i Gran Touring, or GT as its rear nameplate suggests, is one of the most practical 3s I’ve ever spent a week with. The front seating area is much the same as the 3 Series Sedan or Touring (both identically sized), but a 200-mm stretch overall to 4,824 mm (pulled from the Chinese-market long-wheelbase 3 Series Sedan), a 111-mm increase in wheelbase to 2,921 mm, 18 mm more width to 1,829 mm, and 79 mm in extra height for a total of 1,508 mm, makes for a much longer, taller and somewhat wider and heavier 3 Series (at 1,819 kilos as tested, the 335i GT xDrive weighs 136 kilos more than a 335i xDrive sedan and 100 kg more than a 328d Touring – there’s no 335i wagon available in Canada), none of which will sound enticing to BMW’s traditional performance crowd. Yet factor in that it does all this while riding lower and weighing 96 kilos less than an X3 crossover, while delivering more front and rear headroom, more front and rear shoulder room, and more rear legroom, not to mention 28 kilos greater payload plus better performance and better fuel economy, and it’s easy to see where BMW is targeting its latest 3 Series offering; young upwardly mobile families.

The GT’s cargo area offers a new twist for the innovative Bavarians. Pop open the powered rear hatch, which can be done by sweeping your foot under the rear bumper, and a large accommodating load floor awaits, while a heavy-duty cloth-finished hard shell tonneau is positioned overtop that’s easily removed for taller items. BMW includes a tie-down rail system for fixing cargo firmly in place, and if you need more room those aforementioned seatbacks automatically lay completely flat just by pulling a lever at each sidewall. It couldn’t be simpler or easier to use. And those 40/20/40 split-folding rear seatbacks can be configured up to 15 different ways for complete passenger/cargo flexibility.

As mentioned the GT’s stretched wheelbase really improves rear-seating space, its 995 mm of rear legroom having increased by a shocking 104 mm over the sedan and wagon’s 891 mm. This pushes rear accommodations into luxury car realms, and there’s also more room from side to side to fit in three regular sized adults. Additionally, you can change the angle of the seatbacks as desired, from a more upright cargo-optimized position to being more reclined and relaxed. If only four are aboard, a folding centre console can be lowered, revealing two pop-up cupholders and a small, lidded storage compartment. Those really paying attention will also notice an airier feel to the cabin, created by frameless doors that give occupants a larger greenhouse to enjoy the passing scenery. My particular car had another panoramic viewpoint, via the double-paned glass sunroof overhead, which really opens things up to a near-convertible experience.

Up front it’s BMW business as usual, which is just the way happen to like it. Everything is exactly where I want it to be including the crystal clear colour infotainment widescreen display perched atop the centre stack, and correspondingly user-friendly iDrive controller within fingers reach on the lower console, and the extra ride height and commensurately taller seating position provides a more commanding view of the road. I think it’s a good compromise between X3 and regular wheelbase 3 Series models, possibly enough to persuade X3 buyers into its sportier, better handling and more fuel-efficient package while allowing those solidly entrenched in the more traditional 3 Series camp an opportunity to size up in order to fit in their growing families without losing out too much on performance.

While we’re on this subject let’s be reasonable, the 3 GT might be a bit more fun through the curves than the already very respectable X3, but compared to a 3 Series Sedan or Touring its greater height and resultantly taller centre of gravity, heftier weight and longer wheelbase, combined with the softer rear suspension setup of the 3 Series Touring that it uses, make for a car that’s not quite as exacting around corners. Still, I certainly was entertained, and I don’t mean in an unnerving way. My 335i GT xDrive was grippy when pushed hard through a favourite serpentine mountain stomp, effortless fast and fully planted at high speed on the freeway, and a pleasure to drive quickly or slowly through the city. Altogether the GT is a great all-rounder.

Of course, my particular car’s turbocharged 3.0-litre inline-six mated to its paddle-shift actuated eight-speed automatic gearbox was an ideal combination for letting the car loose on the open road, the engine making a conservative total of 300 horsepower and 300 lb-ft of torque, the latter number achievable from as low as 1,300 rpm, while BMW’s very capable xDrive all-wheel drive made sure all that power hit the road when called upon, the sophisticated driveline making the most of winter’s slippery conditions, while standard traction and stability control join four-wheel discs with performance-tuned ABS for impressive control in all conditions.

I spoke of better fuel economy than the X3 before, the 335i GT achieving a Transport Canada EnerGuide rating of 10.4 city, 6.7 highway and 8.7 combined. If you want to get the same practical 3 Series package with better mileage I recommend the 328i xDrive GT that ekes out 9.4 city, 6.1 highway and 7.9 combined, while delivering a strong 241 horsepower and 258 lb-ft of torque from its turbocharged 2.0-litre four, the latter number maximized at only 1,250 lb-ft of torque. That it costs considerably less at its initial purchase is another bonus, starting at $48,990 compared to $56,990, plus for freight and pre-delivery prep. Of course EnerGuide numbers can only be used for comparison purposes, an upgrade to the system coming for the next model year. If you want more realistic fuel economy we need to look south of the 49th to the U.S. EPA system that rates the four-cylinder GT at 10.7 city, 7.1 highway and 9.0 combined, and the six at 11.7 city, 7.8 highway and 9.8 combined, still excellent as far as performance cars go. This has much to do with BMW’s many EfficientDynamics technologies, including an Eco mode that amongst other fuel saving features prompts the car to shut the engine down while it would otherwise be idling. Incidentally, the same rocker switch that enables Eco mode can also initiate Comfort mode, Sport mode and Sport+, which is a track-ready version of Sport mode. I found myself mostly switching between Eco and Sport, depending on requirements.

I granted the 3 Series GT arguable good looks at the beginning of this review, but the design is not without its detractors. I, for one, like the clean lines of BMW’s four-door sedan best, and appreciate the styling of the Touring model too, but this GT is really growing on me, especially after experiencing just how wonderfully easy it is to live with. The GT’s design team, headed by Page Beermann, was tasked with the challenge of making this longer, wider and taller hatchback look as streamlined as the rest of the 3 lineup, and to that end they’ve done an admiral job. Due to its larger dimensions they made its high-gloss black-enhanced trademark twin kidney grille taller along with the headlights, while the hood bulges more. An additional horizontal line on the side surfacing aids its windswept look, helped somewhat by its 4 Series-style high-gloss black (I’ll take mine in silver or body-colour please) boomerang-shaped front fender “air breathers”, which are functional by the way, venting air from inside the engine compartment to reduce drag and increase performance and fuel efficiency. As part of its abbreviated rear deck lid, a hidden spoiler automatically extends at speeds upwards of 110 km/h to ensure optimal downforce for better rear traction. According to BMW, there isn’t a single exterior panel shared with any other 3 Series model.

As much as I love BMW’s Alpine White paint on certain vehicles, and it looked nice on this GT, I can’t help but wonder if a darker colour might make it look smaller (that theory certainly works with clothing), possibly Mineral Grey Metallic or Black Sapphire Metallic (both $895 options), although no matter the exterior shade I’d opt for the gorgeous Coral Red Dakota Leather interior of my tester. It positively glowed, and reminded me of an old 3.0 CSi coupe I fell in love with as a young man (and I’m still hoping to possess one day). That, combined with high quality soft touch plastic just about everywhere, even on the lower door pocket panels, made the 3 Series GT experience every bit as enjoyable as any other 3 Series I’ve driven in recent years. Again I’ll harp about this new piano black lacquered plastic phase were suffering through. Anyone who’s owned a black piano knows how hard they are to keep dust-free, and a car is a much dustier environment than most homes, but the beautiful textured aluminum trim in my tester more than made up for the inky, shiny irritation. My only other complaint is flimsy, hard plastic used for the inner console panels, odd considering how perfect every other surface is.

I know, it’s hard to complain about a car as well made as any 3 Series, but that’s what we automotive journalists are paid to do. I have to admit, however, that this 335i Gran Turismo has won me over. Its superb combination of driving dynamics and unquestionable comfort mixed with unique style and surprising practicality makes this the 3 Series for smaller growing families. I recommend it highly
©(Copyright Canadian Auto Press)
Car Shopping Tools