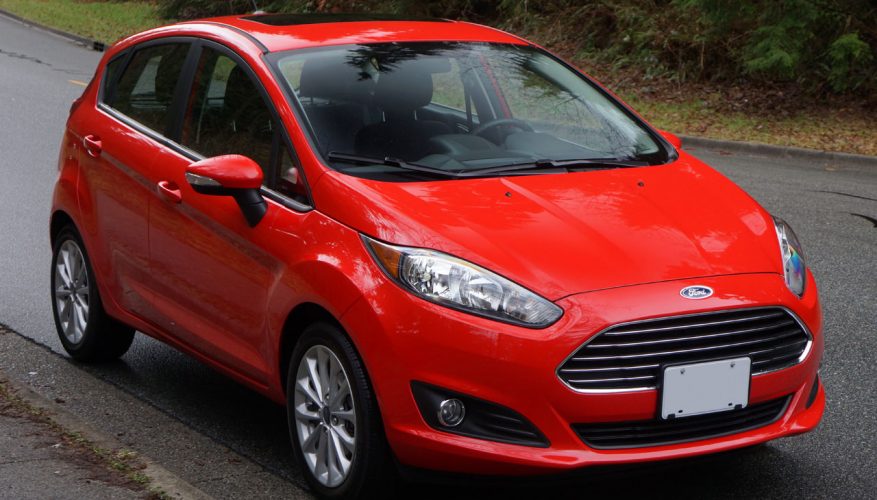 You’d think after spending time in a new Fiesta ST that the regular Fiesta would seem a bit on the boring side, but not so. Certainly

the ST is a rare and wonderful whirlwind of fresh air to drive, but as far as subcompact hatchbacks go the little Fiesta SE I recently tested out is impressive on all counts.

For 2014, Ford currently offers the Fiesta with two engines and three transmissions, the ST getting a 197-horsepower 1.6-litre turbocharged, direct-injection EcoBoost four connecting through to a six-speed manual, and all other models getting Ford’s 120 horsepower DOHC, 16-valve, Ti-VCT 1.6-litre four-cylinder with 112 lb-ft of torque driving the front wheels via a five-speed manual or a sophisticated six-speed PowerShift dual-clutch automatic. Of course, nearly 200 hp sounds pretty feisty compared to 120, and let me tell you there’s much more to the fabulous little Fiesta ST than just its high-revving mighty might engine, but most of us regular folks are just trying to get from point A to B in the most economical way possible, with a modicum of comfort too, of course, and to this end I think you’ll be impressed with the Fiesta SE.

For starters I got a lot of positive comments on the styling. I know it looks like a shrunken Aston Martin, but hey, if you’re going to copy a carmaker you might as well copy the manufacturer of the prettiest sports cars on the planet. My Fiesta SE’s Race Red paint certainly made it stand out in today’s bland silver, gray and white crowd, highlighting its body-colour mirror caps that are finished off nicely with integrated turn signals for an upscale look, standard on the SE. Other standard SE features include powered mirrors inside those caps, with integrated blind spot mirrors for better blind spot visibility, power locks with remote keyless entry, power windows, a tilt and telescopic steering column, a multifunction steering wheel with audio/cruise/phone controls, a multifunction message centre, Ford Sync connectivity, Ford MyKey, air conditioning, metallic interior trim, ambient lighting, chrome door release handles, a front centre console armrest, an embossed seat design with soft cloth interior inserts, an overhead console, a perimeter alarm, and more. Altogether, the Fiesta SE Hatchback starts at $17,925 as tested with the automatic transmission, plus $1,565 for freight and pre-delivery prep. If you want your Fiesta SE with a five-speed manual it’ll only set you back $16,675 plus freight, or forgo the fancy upgrades and you can get into a base S model for a mere $11,999 plus freight after a $2,500 delivery allowance; it’s MSRP is $14,499 plus freight.

My car also included the 201A package featuring the SE Sport Appearance package including its upgraded eight-spoke Sparkle Silver alloy wheels on 195/50 all-season tires plus MyFord Touch infotainment with satellite radio for $850, navigation for $800, the Comfort package featuring heated seats, heated mirrors and automatic climate control for $500, a powered moonroof for $1,200, and a somewhat unsightly keyless entry pad on the driver’s door for $125. All the options, including the $1,250 automatic transmission, totaled $4,853, for an as tested total of $21,452 before the $1,565 destination fee.

All of these features are set into a cabin that’s really nicely put together, starting off with a comfortable leather-wrapped steering wheel ahead of an ultra-cool set of primary gauges, plus a classy soft-touch dash top, hard but nicely textured plastic door uppers, and really high-quality switchgear, although the right stalk for the front/rear wiper washers is a bit unorthodox and therefore somewhat confusing. Likewise the heated seats are one-way, either nothing at all or scorching hot, but the comfortable, supportive seats they warm up are very nicely detailed with cool hexagonal patterned inserts as well as red stitching to match the exterior paint. The automatic climate control works brilliantly, but you’ll need to keep the defog on full blast to keep the rear windows from fogging up when fully loaded with passengers. There’s way too much gloss piano black graphics for my liking too, as the stuff attracts dust something awful and scratches easily, but the MyFord Touch infotainment system it surrounds is second to none in the subcompact class, with impressive graphics and a really user-friendly experience overall. Likewise, Sync phone connectivity is superb, initially pairing with any smartphone in a snap and always pairing back up again when restarting the car. The system allows wireless music too, so you can play tunes from your personal device via the display in the car, among other features. And the sound quality? Jet’s "Are you gonna be my girl?" sounded great, with ample volume and decent depth of range, as did all the rest of my music.

Out on the road, the 1.6-litre four feels more energetic than 120 horsepower suggests. Maybe it’s the efficient fun-loving dual-clutch transmission that features a Sport mode and rocker switch on its shift knob for rowing through the gears, as there was lots of power on tap for those moments when I just wanted to let my hair down (figuratively speaking) and enjoy myself. On that note, the Fiesta SE’s electric power assisted steering felt crisp and direct, while handling through serpentine roadways was impressive for the class, and the car also tracks fabulously at high speed on the highway. The Fiesta uses MacPherson struts up front and a twist-beam suspension in the rear, a good combination that provides the aforementioned performance along with lots of rear seat and cargo room, the latter measuring 436 litres behind the 60/40 split-folding rear seatbacks. The only negative compared to some of its rivals are rear seatbacks that don’t fold completely flat into the floor, but rather merely fold forward resulting in a step-up from the cargo floor up to the seatbacks.

Now that we’re talking practicalities, all 2014 Fiesta hatchbacks powered by the 1.6-litre engine are Transport Canada rated at a claimed 7.4 L/100km city and 5.2 highway no matter which transmission is being used, although keep in mind that these numbers are to be used for comparison purposes only. My car’s actual mileage was closer to the metric-converted U.S. EPA combined city/highway rating of 7.4 L/100km, which is still very good. If you’re looking for better mileage Ford will have an alternative powerplant soon, a 123-horsepower 1.0-litre turbocharged EcoBoost three-cylinder with 125 lb-ft of torque that will be EnerGuide rated at 6.2 city and 4.3 highway, or more realistically given a combined rating of 6.4 from the EPA, but this engine won’t be available until later this year. Good additional news is that this 1.0-litre three, the base 1.6-litre four, and even the top-line 1.6-litre EcoBoost used by the Fiesta ST use cheaper regular fuel, an important point if you’re on a budget.

Above my SE you can opt for Titanium trim level, which includes all of the additions my tester came with plus it adds larger 16-inch wheels with an aluminum spare wheel, fog lights, a chrome beltline and decklid eyebrow molding, proximity sensing remote access with pushbutton ignition, leather upholstery

and metallic interior trim, an auto-dimming rearview mirror, driver’s seat adjustable lumbar, a reverse sensing system, and more. And then of course there’s the Fiesta ST, which in a word is sublime.

For us regular folks who want to combine a fun-to-drive good-looking car with great fuel economy, good comfort, impressive features and ample roominess, the 2014 Ford Fiesta SE is a great choice.