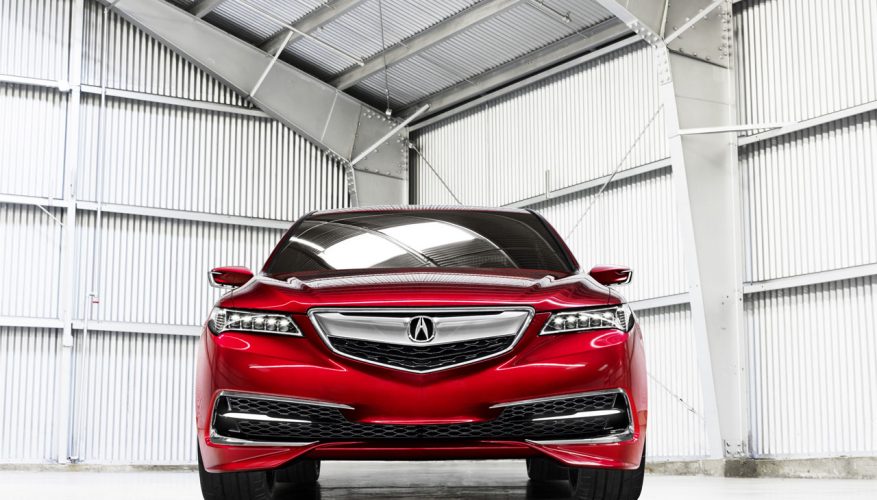 By: Trevor Hofmann
It’s no secret that the current Acura TSX and TL models are in need of updates, but you might be surprised to find out that Honda’s luxury brand is planning to replace both at once with a single model.

It’s true. The upcoming 2015 Acura TLX not only combines the TSX and TL names, but will also form a concerted effort to pull more premium sport-luxury sedan buyers away from the likes of Infiniti’s new Q50, Lexus’ IS series, Cadillac’s ATS, Volvo’s S60, not to mention the big three Germans, Audi’s A4, BMW’s 3 Series and Mercedes-Benz’ C-Class. And according to Acura, in less than a month we’ll know exactly what the luxury brand has planned.

The new production-ready 2015 Acura TLX will makes its debut as part of the 2014 New York International Auto Show at 1:50 pm (EST) on April 16 inside Manhattan’s Jacob Javits Convention Center. You might remember that a TLX Prototype was unveiled at the Detroit auto show in January and then made its Canadian debut in Toronto last month, and true to Acura’s concept history the production version probably won’t stray too far from that prototype.

Think of a lighter, smaller, sportier version of the RLX and you’ve got it pegged; its overall styling not straying from Acura’s trademark look on iota. Like all Acura models the new TLX will share Honda mechanicals, its two engines pulled from the Civic Si and Accord. The former will be Honda’s high-revving 16-valve, direct-injected 2.4-litre i-VTEC four-cylinder in a state of tune that will likely give it more power and torque than the compact model it now resides in, while the latter engine will be the automaker’s 3.5-litre direct-injected i-VTEC V6.

Rather than just pull transmissions from Honda’s parts bin, Acura will offer the four-cylinder with an all-new eight-speed dual-clutch automatic incorporating a torque converter, while the V6 will come mated to state-of-the-art nine-speed autobox. What about a manual? So far nothing has been mentioned, but it only makes sense that one will be offered with the smaller engine at least.

Of course, Acura’s trademark Super Handling All-Wheel Drive will be made available on V6-powered TLXs, albeit a new generation that’s 25 percent lighter and features new torque-vectoring control logic, while the next generation of the brand’s Precision All-Wheel Steering (P-AWS) incorporating independent left and right rear-wheel toe angle control will be standard on front-drive models using either engine.

Acura promises to “deliver higher levels of luxury refinement and sports-sedan athleticism with thrilling performance,” which sounds good to us. With respect to the former, the TLX has been designed to deliver “vault-like quietness in all driving conditions,” says Acura, “with major improvements in noise reduction through enhancements to body stiffness, body sealing and sound insulation, and the application of electronic Active Noise Control.”

While it certainly appears that Acura is getting yet more serious about increasing its presence in the sport-luxury sedan sector, it’s difficult to say if one model will be able to do double duty replacing the TSX, which currently starts at just over $34,000 plus about $2,000 for freight and PDI, and the TL, which current starts at just under $40,000 plus freight and PDI.

The two models are sizably different too, the former closer to a compact and the latter a large midsize model. If the TLX Prototype is as close to the production model as we think, consider that its 4,831-mm (190.2-inch) length sits between the current TSX and TL; it’s 117 mm (4.6 inches) longer than the TSX and 96 mm (3.8 inches) shorter than the TL. When measuring by wheelbase, the TLX’ span between each axle is 73 mm (2.9 inches) longer than that of the TSX, and exactly the same as the TL, which incidentally has an identical wheelbase to the Honda Accord.

So, while smaller than the TL, the new TLX will still be larger than most of its premium competitors, the sales leading BMW 3 Series Sedan measuring just 4,624 mm (182.0 inches) from nose to tail (it’s actually almost identical in length to the new BMW 3 Series Gran Turismo), so therefore continuing the TL’s example of being sized closer to (albeit now smaller than) midsize E-segment vehicles such as the Infiniti M, Lexus GS, Cadillac CTS, Audi A6, BMW 5 Series and Mercedes-Benz E-Class, which either will make it a great deal for those looking for a large C-segment/small E-segment luxury sedan, or too large for those wanting a smaller C-segment sport sedan.

Interestingly, while Acura is reducing its model lineup by an entire car, and potentially shrinking its target market, its German competitors are increasing their model lineups into ultra-unique niche segments. BMW, for instance, now produces four different body styles on its 3 Series platform architecture (the 3 Series GT mentioned above being a stretched model) and three different body styles on the same platform dubbed 4 Series (the 4 Series Gran Coupe just added), and that’s not even mentioning its M-badged cars that receive unique bodywork, and not mentioning additional models available in other markets that may once again end up being sold here (the 3 Series wagon, for instance), plus various crossovers based on the same architecture such as the X3 and upcoming X4, the latter a smaller version of the X6 that Acura previously competed against with its unorthodox but still very impressive (and cool) ZDX; now discontinued. The loss of the ZDX (it’s still available but only as a 2013 model) and soon the TSX represents two models pulled from the Acura showroom, leaving only the Honda Civic-based ILX (which isn’t selling well), the TLX and the RLX for cars, the RDX and MDX for crossover SUVs, and the upcoming NSX sports car. Rivals such as BMW and Mercedes-Benz offer more body styles under single platform architectures, making them appeal to more potential buyers.

While the TLX appears to be a step in the right direction, only time will tell if this single model manages to outsell its predecessors, and we’ll never know what sales Acura could have otherwise seen with a redesigned C-segment TSX and an all-new E-segment TLX. Acura is once again bucking the industry trend.
©(Copyright Canadian Auto Press)
Car Shopping Tools