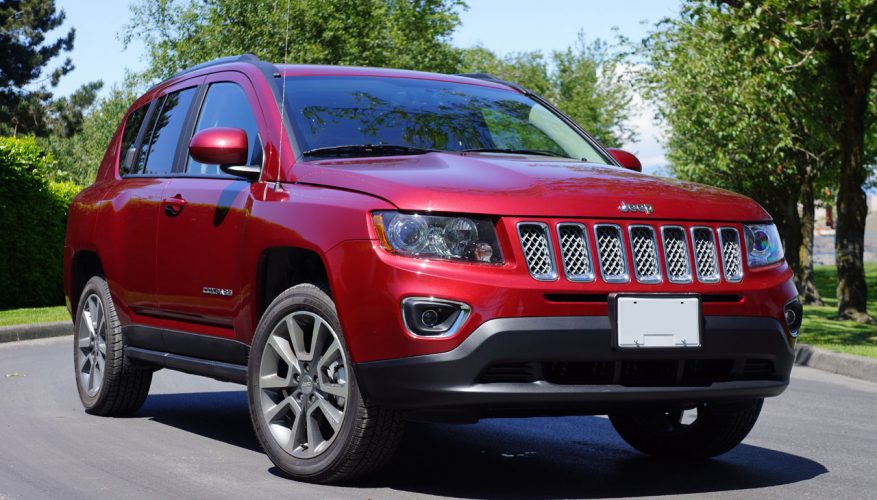 By: Trevor Hofmann
I have to be honest with you. I wasn’t expecting the Compass to impress me. First off, it’s styling is miles better than its first generation, secondly it has one of the nicest interiors in its class, plus its totally accommodating inside, and is sportier feeling on the road than I remember the previous model being.

Jeep updated the Compass for the 2011 model year, giving it some of the Grand Cherokee’s good looks while also revising the suspension for better handling, reworking the interior with more soft-touch materials and better electronics, while giving the little ute the option of real off-road capability. Now, three model years later, the Compass looks much the same as that redo while features have become more plentiful; especially in my top-line Limited model.

While that package would’ve been nice for my brief off-road stint, it wasn’t really needed. Instead, my Compass Limited tester featured the six-speed automatic with manual mode, plus a four-wheel drive system that includes four-wheel lock, useful for getting out of the sandy dirt I found myself trapped in. A two-wheel drive model might have dug itself in deeper to the point of being permanently parked until help came to assist, but the four-wheel lock system simply popped the Compass up and out of the sand and I was off to the races, figuratively speaking.

Truly, while the Compass’ standard Touring suspension is quite agile, managing corners with adequate stability and very capable at high-speed on the highway, aided no doubt by its nice big 18-inch rims wrapped in 215/55R18 all-season rubber, I certainly wouldn’t be off to the races in this little crossover SUV, let alone hitting a makeshift parking lot autocross course on a Sunday afternoon. The Compass is simply not designed for a lot of sporty behaviour. Its six-speed automatic shifts with reasonable quickness, either if left to its own devices or manually via its gear lever, and its 2.4-litre four-cylinder engine’s 172 horsepower and 165 lb-ft of torque offers plenty of get up and go considering the little crossover’s relatively light 1,521-kilo (3,354-lb) curb weight, but this one was built for comfort first and foremost, and to that end it does an admirable job.

I mentioned that it has one of the nicest interiors in its class, and I wasn’t exaggerating. The leather in my tester was Saddle Tan, adding a rich warmth that worked well against other surfaces covered in Dark Slate Grey. That Saddle Tan leather covered front and rear seats as well as the door insets and middle panels, even wrapping all the way inside the door handles, with soft padding no less, while nice cream contrast stitching added to the cabin’s upwardly mobile cachet. Most of the Dark Slate Grey surfaces were made from hard plastic, but their textures were nice and fit and finish very good. Large circular vents provided plenty of fresh air via a simple to use three-dial automatic climate control system, the three dials large enough to use while wearing winter gloves. It’s all set into a stylish centre stack that integrates a nice big infotainment system up top, complete with optional navigation and an optional reverse camera. Down below surrounding the shift lever, attractive metallic trim mirrors the metallic trim circling the upper stack and throughout the rest of the interior, although the one on the lower stack features a cute little Jeep Wrangler grille and headlights embossed at centre. The Compass Limited 4×4 is a lot of compact crossover for just $28,295 plus $1,695 for freight and pre-delivery prep. Keep in mind, though, that you can get into a base Compass for a mere $18,995 plus freight, and at the time of writing Jeep was offering a deep discount of $2,750 on all trims without any haggling.

With respect to the optional navigation and reverse camera, my tester included the former as part of a Uconnect CD/DVD/MP3/HDD/NAV upgrade costing $1,225 and also featuring a 40-gig hard drive with 28 gigs available for music/media storage. Interestingly, even the top-line Limited 4×4 model doesn’t include Bluetooth hands-free as standard equipment, either forcing you to buy the $570 Security and Cargo Convenience group that adds Bluetooth along with voice recognition and an auto-dimming rearview mirror with an integrated microphone, plus an alarm, remote start, a remote USB port and a soft tonneau cover, or alternatively you can get a separate package for $375 that contains voice recognition with Bluetooth hands-free, the auto-dimming rearview mirror with a microphone, and a remote USB port. Other optional packages include the Premium Sound group that adds two articulating liftgate speakers that flip down for listening while outside the car plus nine Boston Acoustic speakers including a subwoofer for $400, the Sun and Sound group which adds a powered moonroof to the above stereo for $1,050, and a couple of 18-inch wheel and tire upgrades. Lastly, the ParkView back-up camera can be added for $325.

From a functionality standpoint, the Compass feels roomy front and back, with ample rear leg, hip and shoulder room, while the cargo area is spacious behind the rear seats with 643 litres available, or you can lay the 60/40-split second-row seatbacks completely flat for a maximum of 1,775 litres. Accessing that cargo compartment might take more effort than you’d like, however, as the Compass liftgate is one of the heaviest I’ve lifted in years. Jeep might want to lighten that up or add a powered liftgate option for those who’d rather not wrestle with it while managing armfuls of groceries.

As far as fuel economy goes, the Compass is good compared to most crossover SUVs, with the base 158 horsepower 2.0-litre four-cylinder, five-speed manual and front-wheel drive combination achieving a Transport Canada claimed rating of 8.9 L/100km in the city and 6.6 on the highway, whereas my Limited 4×4 model is estimated to use a bit more at 10.0 city and 7.4 highway. Of course we all know Transport Canada’s EnerGuide rating system is far from realistic, so until this changes later this year for 2015 models it’s best to look south of the border to the U.S. EPA for more accurate guidance. The EPA rates the aforementioned base Compass at a metric-converted 10.2 L/100km city, 8.4 highway and 9.4 combined, whereas they rate my Limited 4×4 six-speed automatic-equipped tester at 11.2 city, 8.7 highway and 10.2 combined. Please don’t compare these EPA numbers to other Canadian-spec competitors’ EnerGuide figures, as the Compass’ rivals will look artificially better, but rather use the EnerGuide fuel economy results for apples to apples comparison purposes.

I started this review out saying how I didn’t expect the Compass Limited 4×4 to impress me, but it truly did. From its mini-Grand Cherokee styling and attractive well-put-together interior to its full load of features and accommodating interior, not to mention its comfortably competent performance, it’s an intelligently thought out crossover SUV that’s certainly worthy of your shopping list.
©(Copyright Canadian Auto Press)
Car Shopping Tools