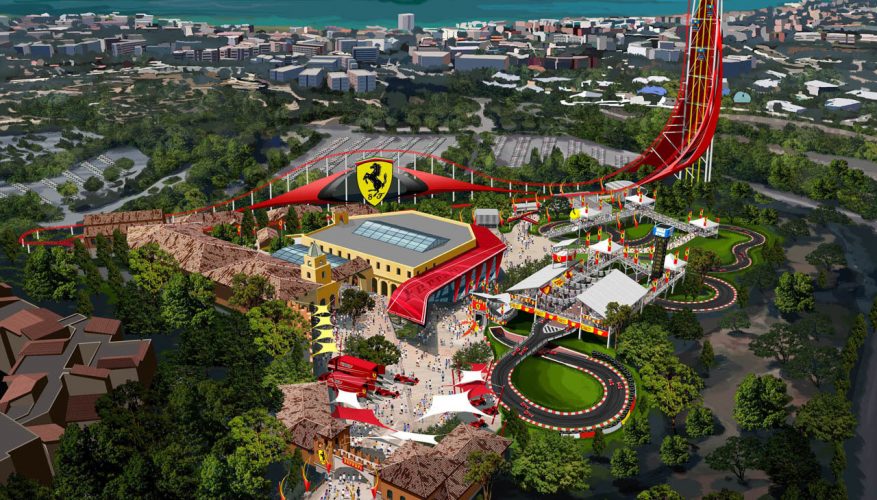 By: Trevor Hofmann
If you didn’t previously know that Ferrari was in the theme park business, you’re probably not alone. First, the current theme park is in Abu Dhabi, and secondly most of us aren’t exactly getting individual invitations from the prancing horse brand to visit it. Formula 1 fans will know about the enticing hot spot, but even for those Canadians in the know, most will choose Disneyland or Universal Studios before hopping on a flight destined for halfway around the world just to have a little fun at Ferrari World. What’s Ferrari’s answer? Make more theme parks, of course.

The second Ferrari World, dubbed Ferrari Land (a slightly obvious copy of Walt’s legendary theme park dynasty) is already in the planning stages, and like the Abu Dhabi facility will allow families to enjoy Ferrari-themed rides, buy up a storm at Ferrari branded shops, eat Ferrari food in branded restaurants, and watch Ferrari shows. While Ferrari’s homeland of Italy makes sense as a possible location (or somewhere in Asia where personal incomes and overall wealth is on the rise), Ferrari has chosen one of the poorest countries in Europe for destination number two, Spain. Then again, Barcelona is one of the most popular tourist destinations in the world, so maybe their choice isn’t so odd after all.

Just outside of Barcelona, eighteen and a half acres of land within the new PortAventura resort has been set aside for Ferrari Land, a project that is expected to cost more than €100 million (CAD$154 million). The new 75,000 square-metre theme park will open in 2016, at which time guests will be able to stay at a new 250-room five-star hotel complete with its own driving simulator.