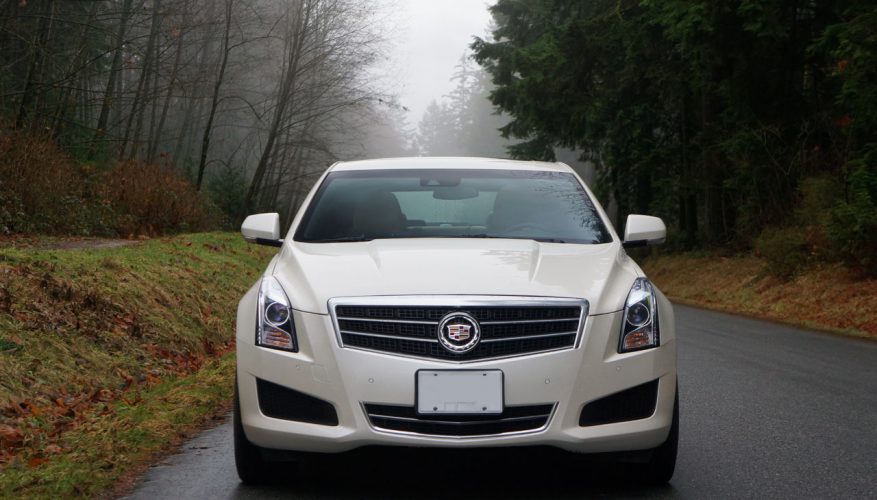 By: Trevor Hofmann
Never mess with success? That’s a mantra oft spoken, but Cadillac isn’t listening. Only after a single year of robust sales, the American premium brand has been tweaking its highly touted new ATS. No, they haven’t changed its creased and folded styling one iota, thank goodness, but they’ve been adding features such as a cool new frameless rearview mirror, a new larger-diameter leather-wrapped steering wheel on cars with paddle-shifters, a 110-volt power outlet on the rear of the centre console of models with the CUE infotainment system and the Navigation package, and Intellibeam automatic high-beam control to the Driver Awareness and Driver Assist packages. Of course, new exterior paint hues have been added to the colour palette too, including Phantom Grey Metallic, Mocha Steel Metallic, Majestic Plum Metallic and Red Obsession Tintcoat.

My ATS 3.6L Luxury AWD tester was finished with none of the above, but rather a very elegant White Diamond Tricoat. Then again it did include the new 110-volt power outlet on the backside of the centre console, and of course the new frameless rearview mirror. No larger steering wheel? No, my notes reminding me that I “really miss the paddles” in this car, the last ATS I tested being a Premium model that comes standard with steering-wheel paddle shifters. Instead, the ATS4 I tested (the 4 denoting all-wheel drive) included the usual +/– selector accessible by notching the centre console-mounted shift lever to the left.

Settling into the ATS’ 10-way powered driver’s seat is a perfectly comfortable and supportive pleasure. Upholstered in Caramel leather, just one of a variety of no-charge two-tone interior options that Cadillac offers other than the standard Jet Black that served as this model’s other tone, it was a rich looking cabin only marred by loads of piano black lacquered plastic. Don’t get me wrong as piano black surfaces look fabulous when the car is in the showroom, constantly being cleaned by a dealership’s lot boy so that it’s as appealing as possible to you the consumer, but in the real world this stuff is a dust magnet, smearing easily as well, and worst of all fine scratches often show up on our test vehicles. Not only Cadillac is enamoured with the shiny surface treatment, incidentally. It’s a brand-wide fad that couldn’t end too soon.

What I do like is how effectively Cadillac has hidden the car’s secondary controls behind these inky surfaces, the centre stack an example of clean, uncluttered simplicity. Touch sensitive controls let you interface with the automatic HVAC system, audio system, which uses a touch sensitive sliding volume control that actually works in comparison to some rival systems that increase volume when you’re trying to slide it to the left to decrease it, or vice versa, with everything necessary displayed above on Cadillac’s CUE infotainment touchscreen, a beautifully bright, clear eight-inch display that’s as appealing as such systems get. It’s a bit fussy to use at first, but after playing with it for a bit it all made perfect sense.

One of the reasons I spent so much time engaged in CUE was to make the most of the fabulous sounding 10-speaker Bose surround sound system included in my tester, an option on my car’s Luxury trim level and worth every penny if you’re a music buff like me. Both systems came with the $1,495 Cadillac User Experience (CUE) & Navigation package, which adds interface auxiliary device connectivity (three USB ports, an SD card slot and auxiliary input jack), upgraded Bluetooth phone/audio connectivity with natural voice recognition, a single CD player, XM radio, and a 110-volt AC power receptacle located on rear of front centre console. One of the USBs is hidden within a compartment behind the display screen. Just press the metal Cadillac chevron trim piece below the infotainment screen and the entire interface powers up to expose the hidden compartment, very cool and quite useful.

Additional Luxury trim features include E-Z Key passive entry with pushbutton ignition, an auto-dimming rearview mirror, the aforementioned CUE infotainment system (without navigation), a backup camera, a driver information centre, 10-way powered front seats, leather upholstery, a heated steering wheel (that I wish it sensed outside temperature and came on automatically like some rivals do), a universal home remote, a remote starter, front and rear parking assist, power folding mirrors with integrated turn signals and driver side auto-dimming, a grey-painted grille with midnight chrome accents, 17-inch polished alloy wheels, and the availability of optional 3.6L V6 engine that was included in my tester.

The 3.6-litre V6 engine note sounds ultra-sporty, an aural delight that only gets better as its 321 horsepower and 275 lb-ft of torque push the 1,646-kilo (3,629-lb) ATS4 to 100 km/h in a joy inducingly quick five and a half seconds. Bar none, this is the sportiest sport-luxury sedan this side of an M3 or C 63 AMG, including the regular 3 Series, C-Class and even the Infiniti Q50 which is biased a bit more towards luxury than this track star.

Of course, you don’t have to go with Cadillac’s most powerful ATS (most powerful, that is, until the ATS-V shows up), the crested-wreath team also offering a fun-loving 2.0-litre turbocharged four good for a very enjoyable 272 horsepower and 260 lb-ft of torque, or a 2.5-litre four capable of a respectable 202 horsepower and 191 lb-ft of torque in base models. All engines come mated to a six-speed automatic other than the 2.0-litre turbo four that can be had with an optional six-speed manual, that being a car I’d very much like to test out.

Along with the acceleration performance, the ATS loves to carve up canyon roads. I’m sure you’ve seen the TV ads showing some pretty intense maneuvers on narrow faraway hairpin-strewn stretches of tarmac we’d all love to encounter, and these aren’t computer-generated Need for Speed segments, but rather genuine video of the car careening around corners at speeds far in excess of most of our comfort zones. The ATS isn’t just another pretty Cadillac face, but like I said just above, the sportiest sport-luxury sedan in its class. During my test week I had plenty of opportunity to exploit its talents. Casually driving at city limits across town, where only its run-flat tires hamper a good albeit firm ride, I made my way to various favourite driving haunts, serpentine ribbons of two- and (in some cases) one-lane roadways that few locals even know about (or there would be a lot more “testers” there in tuner cars and the like, not to mention constabulary forces), and the ATS4 performed flawlessly, sticking to moist pavement as if its tires were wrapped in Velcro loops and the road was made up of hoops – not a bad idea, actually the ZF-sourced powered rack-and-pinion variable-effort steering effortlessly responding to input with excellent feedback. Likewise, the performance brakes that come with the 3.6 (and the 2.0 turbo) bleed off speed with dramatic force, and fade is minimal compared to some others in this segment. Just the same, the only feature to mar the ATS’ performance image is its antiquated parking brake, a foot operated throwback that clearly was the brainchild of some aging product planner that must have been on Cadillac’s staff since the Fleetwood Brougham days. What were they thinking? A handbrake please! Or at the very worst one of those new electronic ones, so it at least feels modern. Away from circuitous backroads and onto the freeway the ATS4 tracks brilliantly at high speeds, firmly rooted to the roadway with solidity that defies its compact size, while wind and road noise is quite low except for the constant purring of the V6.

With respect to the 4 in ATS4, all-wheel drive isn’t necessary in every Canadian region, or for that matter any of them. Truly, Cadillac’s traction and stability control systems are so competent that it takes a great deal of skill to make them break loose on slippery surfaces, the only need for all-wheel drive being those moments when diving into deeper snow, such as ski resort parking lots where the ATS4 will get right down to business, removing itself from the white flaky stuff as quickly as you can shift into Drive and press the throttle. Being an avid skier I could see myself opting for the 4 due to its improved traction, but mostly because the mountain I buy our family passes for has a four/all-wheel drive or chains policy, and I can’t stand putting on chains. The ATS4 has a slightly taller ride height than the regular ATS, which will be a bonus in snow and maybe not so much on dry pavement in the corners, where a lower centre of gravity always helps handling. Additionally, that extra ride height makes for a larger gap between tires and wheel cutouts, which isn’t quite as attractive.

Top-line ATS models are dubbed Premium and add navigation, a head-up display, lane departure warning, HID headlights and 18-inch machined finish alloys on 225/40 all-seasons, while RWD models also get a performance cooling system as well as Magnetic Ride Control suspension (another reason to forgo the upgrade to the ATS4).

My ATS4 Luxury included upgraded polished 18-inch rims for a mere $840, plus the Advanced Security package (theft-deterrent alarm system, tilt sensor, steering column lock, and locking wheel lugs) for $440, the Driver Awareness package (safety alert seat, forward collision alert, lane departure warning, rain-sensing wipers, IntelliBeam headlamps, rear thorax airbags) for $945, CUE with Navigation for $1,495, a powered glass sunroof for $1,395, and the Tricoat paint for $1,295, the options pushing the ATS4 Luxury’s MSRP of $46,675 up $6,510 for a total of $53,185, plus the $1,700 destination charge, of course.

If you haven’t already figured out that I love the new Cadillac ATS then you’d better grab another cup of joe and read this review again, because almost every aspect of this car screams winner! From its styling and performance to its interior quality and spaciousness, its dusty piano black lacquer trim, lack of paddles, that age-old foot operated parking brake and a miniscule 294-litre trunk can’t even turn me off the car. The ATS is that good. Add to that THE best warranty in the premium segment at four years or 80,000 km comprehensive and six years or 110,000 km powertrain and it’s hard to beat.

So Cadillac, please give me another ATS to test out. Maybe a 2.0-litre turbo in RWD Performance trim with optional 18-inch wheels, maybe Red Obsession Tintcoat, a Morello Red interior with Jet Black Accents, all the other kit included in my most recent tester, plus of course the $1,600 six-speed manual transmission upgrade that also includes a limited slip diff and (get this) an electronically operated parking brake. Sigh…
©(Copyright Canadian Auto Press)
Car Shopping Tools