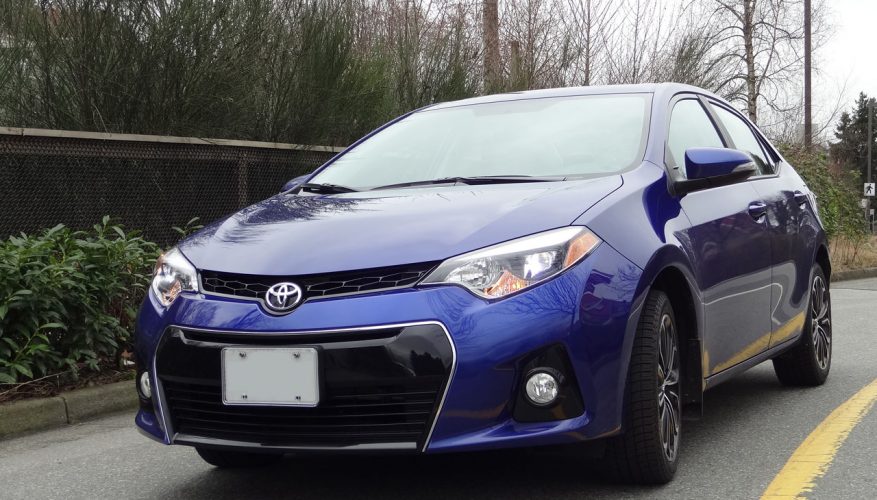 By: Simon Hill
"This is a Corolla?" my teenage son asked. "Wow!"

Indeed, there’s much about the new 2014 Corolla to wow compact car buyers who’ve grown up thinking of Corollas as reliable but entirely bland automotive conveyances.

The changes start on the outside, where Toyota has given the 11th-generation Corolla a slightly more angular, forward-raked look, with some new character lines and a big trapezoidal maw of a lower air inlet, as is all the rage these days. My test car’s S trim and Technology package amplified the stylistic statement with sharp-looking 17-inch alloy wheels, a rear lip spoiler, and fog lights set in a more aggressive front fascia with a chrome-outlined hexagonally-shaped lower intake (the specs list a unique rear fascia for the S too, but I couldn’t really tell the difference at the back). In my test car’s Blue Crush Metallic paint (a colour unique to the S trim, as is Barcelona Red Metallic) the overall effect was really quite pleasing.

If the Corolla’s exterior transformation is quietly impressive, its interior transformation is all that and more. No, Toyota hasn’t gone all soft-touch materials, leather and real-wood trim à la Jaguar, but there’s a soft-padded dash topper with moulded "stitching," and my test car featured convincing looking (and breathable) SoftTex leatherette seating, a leather-wrapped steering wheel, and leather-trimmed gearshift. Most of the remaining interior elements are constructed of rigid plastics, but the vaguely Tupperware-like appearance of the previous-generation Corolla has been entirely banished, and instead Toyota has selected textures and finishes that work well together to create a sophisticated, modern and decidedly upscale atmosphere, especially in S trim. My test car had a full-width band of brushed-metal look trim running across the dash and into the doors to help create a sense of visual space, with piano-black inserts above this and at the centre stack (other trims only get the piano black at the centre stack).

I should point out that the sense of spaciousness is more than merely visual: The new Corolla has a 99-mm longer wheelbase than the previous model, and is noticeably roomier inside. I found the front seats very accommodating and comfortable, and while the back seat is a trifle flat and bench-like it’s well angled and supportive enough at the legs and back, and it certainly offers lots of legroom and headroom for my five-foot-eleven frame (I was also impressed that I didn’t have to move either the headrests or the front seats in order to fold the 60/40 split rear seatbacks forward).

To help my test car really dazzle, Toyota further kitted it out with the top-tier $3,900 Technology Package, which adds (take a deep breath here) very nice-looking 17-inch alloy wheels (steel wheels are standard across the range), rear disc brakes, automatic air conditioning, a navigation system, integrated satellite radio, smart key with pushbutton start, an automatically dimming rearview mirror with compass, a power moonroof, power-adjustable driver’s seat, and the SoftTex upholstery. It’s a genuinely impressive selection of equipment for a mass-market compact car, though it does represent a solid 20-percent price bump from the S trim’s base MSRP of $20,735 (including the $1,520 destination fee), bringing the as-tested price to $24,635.

In terms of functionality, I quite liked the slick-looking and generally intuitive infotainment interface, though I remain a little puzzled as to why Toyota now buries the navigation system under the "Apps" button. It’s one less button for Toyota to install, but it’s one more key-press for owners every time they want to open the navigation map.

Underpinning the new Corolla, Toyota has largely stuck with the tried-and-true, carrying over the same basic suspension bits (MacPherson struts up front and a torsion beam at the rear), the same front-drive layout, and the same 132-horsepower 1.8-litre twin cam VVTi four-cylinder engine as the previous-generation Corolla, but pairing the engine with a couple of new transmissions: The old four-speed automatic remains for auto-equipped base CE cars, but elsewhere in the model range there’s now either a CVT automatic for those who prefer the car to shift for them, or a six-speed manual for the frugal or sporty-minded (that is to say, you can only get the six-speed in the manual-equipped base CE or the nearly-loaded S trim). If you opt for the S trim with the CVT automatic you get paddle shifters that can operate the transmission in stepped mode with seven simulated gears, but my test car was fitted with the six-speed manual so I didn’t have the chance to try this out.

I did thoroughly try out the six-speed manual transmission however, and while it works fine I thought it could use a little tweaking to make it as polished as the Corolla’s new styling and interior. First off, the shift linkage is a little vague and lifeless feeling. It’s easy enough to find and engage your gears (indeed the gearbox seems remarkably slick), but it rather feels like you’re telegraphing your commands in (so I can’t honestly say the gearbox feels slick, as it doesn’t really have much feel at all). Second, I am somewhat baffled by Toyota’s choice of gear ratios, which provide relatively wide spacing between the lower gears (too wide, if you ask me) and then only the tiniest little gap between fifth and sixth gears: at 100km/h the difference is only 100 rpm, taking the car from 2,200 in fifth to 2,100 in sixth. It seems like a waste of a ratio, because frankly if you can’t climb a grade in sixth, shifting to fifth for an extra 100 rpm isn’t going to help – you’re going to need to shift into fourth.

Indeed, I pretended fifth gear wasn’t there one afternoon, and the transmission made perfect sense as a five-speed, shifting straight from 4th to 6th and back as required. So my request to Toyota for 2015 is to redistribute the six-speed’s ratios for tighter spacing in the bottom gears (which should provide better city drivability and performance) and a bigger gap between fifth and sixth.

Engine-wise, the Corolla’s four-cylinder is well known and well understood, and Toyota plays to its strength of "epic reliability." The engine does have a slightly buzzy drone when worked hard, and it’s not especially fast (0-100 km/h takes about 9.9 seconds), but I can forgive that given its robustness and reasonable fuel economy.

The S model with the six-speed has official city/highway ratings of 7.1 / 5.2 L/100km using Transport Canada’s current overly optimistic tests (which are due to change next year), and I saw 9.9 L/100km in mostly city driving during my week. My one remark engine-wise would be that a sport exhaust might be nice for the S trim, to give sporty-minded drivers some brap to go with the buzz, but of course these things all add money.

In terms of handling, my test car put its additional wheelbase and revised suspension tuning to good use, offering noticeably improved poise and agility than I recall from previous-generation Corollas (including earlier S models), with better balance and a more neutral cornering attitude. There’s still understeer at the limits of adhesion, naturally, but the rear tires will howl their own protest well before the front tires let go of their grip, which makes the car reasonably enjoyable to toss around the corners. That said, Toyota’s electric power steering still doesn’t offer as much feedback as I’d like, and I noted a fair bit of squat and pitch when accelerating and braking. This is nothing the average driver would ever likely notice or remark upon, but given the S trim’s sporty pretensions I’d prefer if it was a little more planted feeling (the S trim does apparently have sport-tuned dampers and spring rates to go with its bigger wheels, but my seat-of-the-pants evaluation says it still leans a little too far towards comfort).

At the end of the day the 2014 Corolla doesn’t change the basic Corolla recipe, but it does address most of the criticisms leveled at Toyota’s top-selling though not always best-loved compact sedan, adding some chic where the old car was dowdy. While the S trim version perhaps leaves some room for improvement if it wants to be considered genuinely sporty (let’s face it, the Mazda3 and Ford Focus set a high bar), the underlying car combines style, comfort, space, efficiency and reliability in a manner that’s sure to please its loyal followers, and perhaps also win back some market share from rivals such as the Honda Civic, Hyundai Elantra and Mazda3.