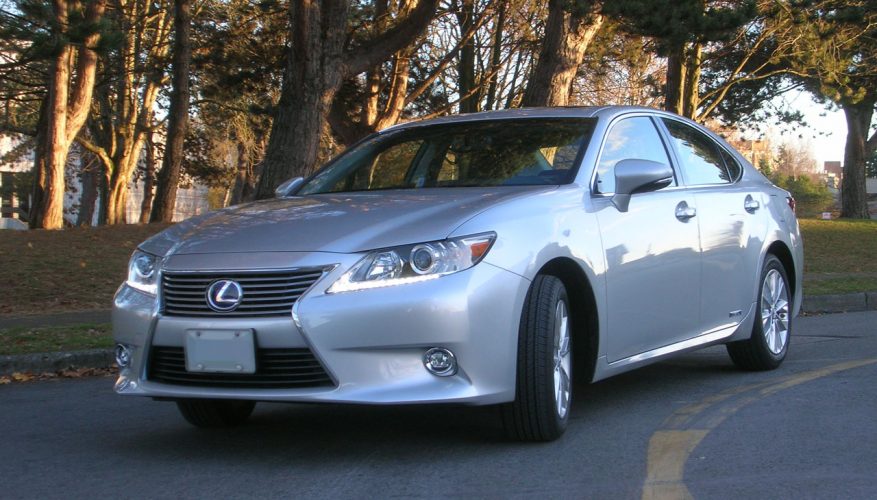 By: Simon Hill
If there were such a concept as frugal indulgence, then perhaps the best embodiment of that concept in the automotive marketplace would be the Lexus ES 300h, which is based on the full-size Lexus ES 350 entry-level luxury sedan. Lexus has been building the ES series since the marque’s inception back in 1989, and has refined it over the years to provide ever-greater levels of space and luxury while keeping the cost of entry surprisingly attainable.

The current sixth-generation ES series was introduced in 2012 for the 2013 model year, and is based on the full-size Toyota Avalon, which is itself based on the mid-size Toyota Camry. This sensible family heritage gives the ES a big head start in the frugality department, leaving the designers at Lexus with the comparatively simple task of imbuing the car with appropriate levels of Lexus luxury. With that mission suitably accomplished, all the engineers needed to do to create the ES 300h was replace the ES 350’s V6 engine with a hybrid gas-electric powertrain based on the Camry Hybrid’s setup, leaving the remainder of the ES 300h virtually identical to its ES 350 sibling.

For 2014, only a few minor changes have been made to the ES 300h: it gets standard Xenon headlights, the Display Audio package has new Siri Eyes Free compatibility, and ventilated front seats are now available even if you opt for the base NuLuxe leatherette upholstery.

Stylistically, the ES 300h is differentiated from the ES 350 by its blue-tinged hybrid badging, unique 17-inch alloy wheels, and a discrete trunk lip spoiler. It’s a quiet and reserved approach to the car’s hybrid identity, and as such will likely suit most potential owners perfectly. Given its size, the ES is a sleek and well-proportioned car, even if the outwardly flared front spoiler gives it a vaguely chubby-cheeked appearance from certain angles.

In other regards, the ES 300h is the same inside as the ES 350, with the same impressive list of equipment. Standard kit includes such features as automatic dual-zone climate control, premium AM/FM/XM/CD audio with USB input and Bluetooth compatibility, an auto-dimming rearview mirror with compass, power locks and windows, the smart key system with pushbutton start, cruise control, and much more. Available packages for the 300h include a Navigation Package, which doesn’t just add a navigation system with an eight-inch display, but also includes a heated woodgrain steering wheel and rain-sensing wipers; a Leather Package, which includes the Navigation Package equipment plus adds leather upholstery, an upgraded 15-speaker Mark Levinson audio system, auto-leveling HID headlights, rear door sunshades, and a power rear window sunshade; and a Technology Package, which includes everything from the Leather Package and adds upgraded premium leather upholstery, dynamic radar cruise control, clearance and backup sensors, the pre-collision system, blind spot monitoring, cross traffic alert, lane departure warning, a power-opening trunk, and passenger seat memory.

All in all it makes the cabin of the ES a thoroughly pleasant and comfortable place to spend time, with the ES 300h actually improving matters over the ES 350 due to its serenely quiet hybrid drivetrain. At five feet eleven inches tall I found all the seats exceptionally spacious, and the trunk in the ES 300h is a reasonably commodious 342 litres. This is down from the 433 litres of trunk space in the ES 350 due to the hybrid’s trunk-mounted motive battery pack, which also precludes having folding seatbacks or a ski pass-through – one of the only real compromises inherent in the hybrid layout.

Mechanically, the ES 300h delivers a net 200 horsepower (compared to 268 horsepower for the V6 in the ES 350) by using a combination of a 156-horsepower 2.5-litre gasoline motor and a pair of electric motors, one of which is mostly used for regenerative braking and the other of which is primarily a traction (drive) motor. Lexus doesn’t specify the traction motor’s power output, but it’s certain to be as much or more than the 141 horsepower delivered by the Camry Hybrid’s electric traction motor, and like all electric motors it delivers impressive thrust at low speeds. The ES 300h’s power is delivered to the road via a CVT automatic, and there are three selectable driving modes: Normal, Eco, and Sport.

Mostly these different driving modes map the throttle response and transmission ratio selection to provide varying levels of performance versus economy, but the Eco mode also regulates the climate control system for better economy, while Sport mode changes the instrument cluster’s "eco gauge" into a standard tachometer. I found the ES 300h’s drivetrain to offer reasonable performance (0-100 km/h takes about 8 seconds) and exceptionally smooth and quiet operation. I could sometimes feel the gasoline engine shudder ever so slightly when starting up or shutting down at traffic lights, but other than that the drivetrain mostly just whooshes the car around without making its presence known at all.

Rated city/highway fuel economy is 4.7 / 5.1 L/100km (this is using the over-optimistic Transport Canada testing system which will change next year), and I was impressed with the car’s real-world results in mixed driving, which showed 6.8 L/100km during my week with the car and 7.4 L/100km over the long term. In terms of handling and braking, the operative words would be comfortable and competent, but the ES 300h does have enough tautness and refinement in its suspension to be called responsive as well, if not actually sporty.

As noted previously, the interior is plenty spacious, and I found the driver’s seat remained comfortable even on longer drives. In terms of materials, rigid plastics are restricted to the lower door panels and lower sides of the console, with soft-touch materials used everywhere else, and a stitched leather-look dash to help create an opulent ambience. I did note that the heated wood-trimmed steering wheel only heated the leather sections at three and nine o’clock on the wheel, and while I remain impressed with the haptic feedback of the Lexus Display Audio controller, I find that it can be fiddly and distracting to use when driving – I suspect having larger "button" areas might help in this regard.

With a starting price of $46,095 including the $1,995 destination fee, the Lexus ES 300h is an impressive offering in the entry-level luxury hybrid niche. It’s not the value leader – Lincoln’s mid-size MKZ Hybrid likely takes that honour with its starting price of $40,125 destination in, and you could argue that the Camry Hybrid XLE or a loaded Ford Fusion also compete at the "almost luxury" value end. On the other hand the ES 300h is a whole lot cheaper than contenders like BMW’s ActiveHybrid 3 (a smaller car, but Lexus puts the BMW on its website’s Compare function), and certainly it offers a commendable amount of space and luxury for the money. If you like the idea of combining the comforts of a largish mid-size entry-level luxury car with the frugal fuel economy of a hybrid, the ES 300h might be just the ticket.