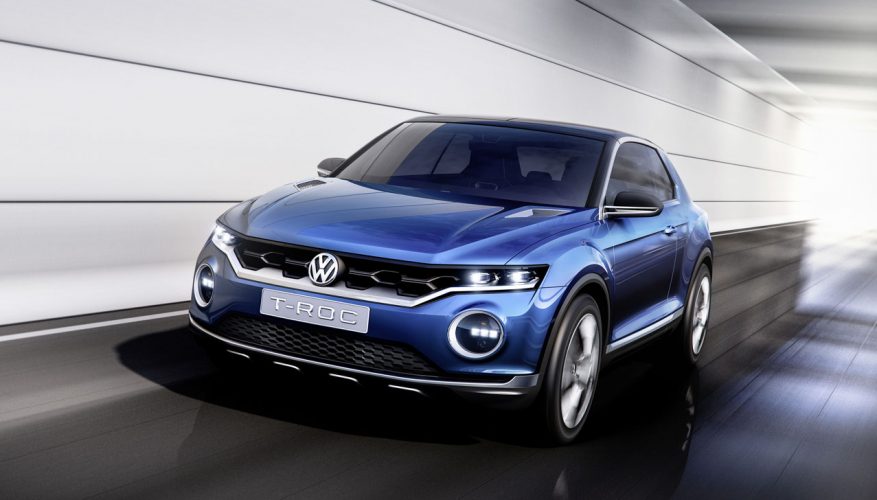 By: Simon Hill
As auto manufacturers increasingly move towards flexible, scalable platforms it’s becoming easier and easier to introduce models for every niche. So although Volkswagen already has a pair of sensible-shoes five-door SUVs in its lineup thanks to the Tiguan and the Touareg, don’t be surprised to see something very similar to the smaller, lifestyle-oriented three-door T-Roc Concept actually go into production.

Debuting at the Geneva International Motor Show, the T-Roc Concept is based on the same new MQB (modular transverse matrix) platform as the current Golf. Mechanically it’s fitted with familiar, ready-to-roll components from Volkswagen’s parts bin, with a 2.0-litre TDi diesel engine hooked up to a seven-speed DSG gearbox and driving all four wheels through the company’s Haldex-based 4Motion permanent all-wheel drive system. To provide capable performance in varying conditions the system has three driving modes: "Street", "Offroad", and Snow".

Stylistically, Volkswagen says the T-Roc "offers a glimpse at future Volkswagen SUVs," dubbing it "an SUV concept vehicle one down from the Tiguan in the Golf format, for more than just urban driving." This appears to translate to short overhangs, a coupe-like side profile, and a front end featuring a bold, three-dimensional grille with large, honeycomb-shaped openings. Volkswagen calls the grille, which is high and wide in the middle and runs out narrower on the sides, "a new and dominant design element," so expect to see it turn up on production vehicles.

More questionable as production design elements are the T-Roc’s removable roof and three-door body style, although given the company’s hint about the T-Roc following the "Golf format" it’s possible Volkswagen may indeed offer a production version in both three- and five-door formats. The Concept’s removable roof halves are designed to be taken off easily and stowed in the trunk.

Inside, the T-Roc features seating for four and an entirely digital dashboard, with instruments, status displays and climate controls all in digital form, and a portable tablet-style central infotainment display. When in "Offroad" mode, front cameras with spotlights can display the car’s surroundings on this central touchscreen to make navigating around obstacles easier, and there’s a rear camera as well. As in the current Beetle, painted interior panels reflect the vehicle’s exterior colour and pay homage to the company’s past.

According to Volkswagen, this blending of past and present was an essential part of the T-Roc’s design: "The team at Volkswagen Design, led by Walter de Silva and Klaus Bischoff, has progressively advanced the brand’s SUV DNA in the T-Roc, but at the same time have preserved Volkswagen history," the company noted in its press release.