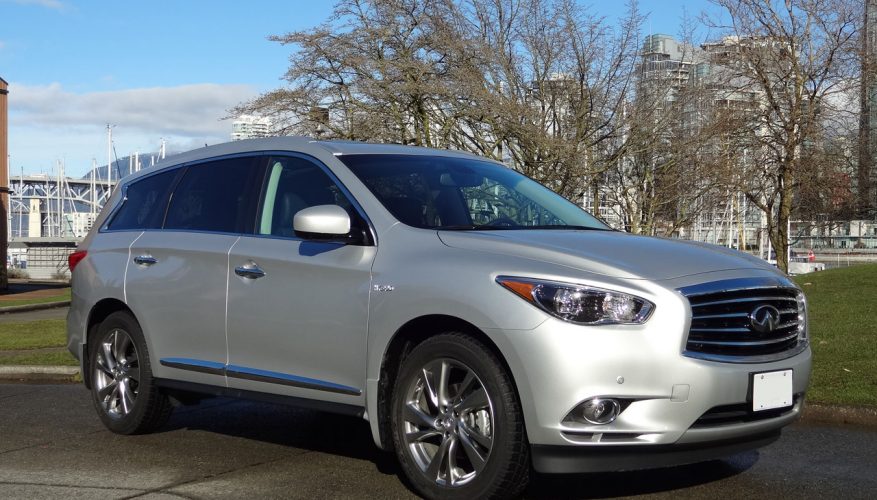 By: Simon Hill
Given the new naming strategy that Infiniti introduced for 2014, you could be forgiven for thinking the QX60 Hybrid is an all-new model. The truth is more complicated: The regular QX60, which was introduced for 2013, is in fact the same as the JX35 in everything but the name, so it’s not actually a new model. But the QX60 Hybrid is indeed new for 2014, so it is an all-new model, in a way. Is that clear?

Okay, perhaps that’s not the best explanation … let’s try again: For 2014, Infiniti has introduced a new model to its seven-passenger QX60 SUV lineup, which was formerly known as the JX35. The new model is the QX60 Hybrid, which replaces the regular QX60’s powertrain (a 265-horsepower 3.5-litre V6 hooked up to a CVT automatic) with a hybrid powertrain consisting of a 2.5-litre supercharged four-cylinder engine paired to a 15kW electric drive motor to produce a system total of 250 horsepower sent to the drive wheels via a CVT transmission. And while the standard QX60 comes with either front-wheel or all-wheel drive, Canadian QX60 Hybrids all come equipped with AWD as standard equipment.

On the road, the QX60 Hybrid doesn’t feel substantially different from its conventional sibling (or from the Nissan Pathfinder on which it is based, for that matter). While the QX60 Hybrid’s four-cylinder gas engine has both less power and a little less torque than the conventional QX60’s V6 (torque is 243 lb-ft versus 248 lb-ft for the V6), the electric motor more than compensates for this, with typical instant electric torque way down low. So the QX60 Hybrid feels at least as responsive as the V6 version, while delivering city fuel economy that’s about 30 percent better than the conventional AWD QX60 and 28 percent better than the conventional front-wheel drive QX60. The official city/highway numbers are 7.6 / 6.9 L/100km for the Hybrid, 10.9 / 7.8 for the V6 AWD, and 10.5 / 7.6 for the V6 FWD, although as with any current Transport Canada ratings you can expect your real-world consumption to be somewhat higher. My best result in mostly urban driving was about 12.5 L/100km, which is roughly 25 percent better than I managed in the JX35.

Perhaps the primary difference in the QX60 Hybrid’s powertrain is the soundtrack it plays: At low speeds, especially when cold, the hybrid system’s supercharged four-cylinder murmurs and whooshes like the wind outside your house on a breezy night, and if you slip it into "Sport" mode and stomp on the throttle it takes off with a very precise mechanical hum rather than a V6 roar. Speaking of Sport mode I should note that, like the regular QX60, the Hybrid has a four-position driving mode selector with Sport, Standard, Eco, and Snow modes.

In Standard mode the QX60 Hybrid behaves like any other CVT-equipped vehicle, with engine revs rising and holding steady to match power demands. In sport mode the CVT imitates a conventional automatic, "kicking down" and shifting through programmed virtual gears (personally I’m not sure why you’d want to do this after dropping the extra money for an efficiency-minded hybrid, but hey, it’s fun and the supercharged four sounds good pulling through the pseudo-gears, so I guess why not?). In Eco mode the transmission and gas pedal cooperate to take an active role in promoting good driving habits, with the transmission keeping revs down and the gas pedal insistently pushing back if you delve too deeply into the throttle. It feels a little peculiar perhaps, but Infiniti claims it’s good for a five- to 10-percent improvement in real-world fuel economy (I probably should have used this mode more often, but instead I mostly left it in Standard mode like I suspect most owners will).

The QX60’s ride is composed and comfortable, which should help it win the hearts of its target customers, even if the resulting rather soft handling won’t win the hearts of enthusiast drivers. Braking performance is good for a 2,098-kg crossover, and I didn’t notice any of the "grabby" feel sometimes associated with regenerative brakes. Overall I found that when driven in a normal manner the QX60 Hybrid was settled and confidence inspiring in a quiet and predictable sort of way.

Inside, the QX60 Hybrid is fitted out with nicely textured and good-looking materials. While there is some hard plastic used, including on the upper dash panel, it doesn’t stand out visually, and soft-touch materials are specified wherever you’re likely to lay a hand or elbow. A nice touch if you’re parked after dark is sequential welcome lighting that senses the smart key and illuminates the door handles as you approach.

Practical touches include sliding second-row seats that can tip forward in a sort of disappearing origami configuration to provide very good access to the third row, or can tip forward in a more conventional manner to allow slightly more restricted access (the passenger’s side of the 60/40 split bench can even tip forward when there’s a child seat buckled in place). Also rather practical is the space available in the aft two rows: provided the middle row isn’t cranked all the way aft there’s sufficient space for my 5-foot-11 frame even in the third row, and my teenagers had nothing but praise for the second-row seats. Fold the seats and there’s up to 2,166 litres of available cargo space (versus 447 litres of cargo space when all seats are in place).

According to Infiniti’s Canadian website, all 2014 QX60 Hybrids come equipped with the $5,000 Premium package for a suggested starting retail price of $53,950. In this trim the QX60 Hybrid is certainly plenty luxurious, with a wide array of standard equipment. In addition to its intelligent all-wheel drive, the QX60 Hybrid gets tri-zone automatic climate control, leather upholstery with heated power-adjustable front seats, a power moonroof, intelligent key with pushbutton start, a heated leather-wrapped steering wheel, a seven-inch colour infotainment display with rearview monitor, automatic HID headlights, cruise control, a power tailgate and rear privacy glass. Of course basic functions such as locks and windows are all power-operated, and there’s a nicely featured audio system (more on this later).

Overall then, from a comfort and convenience perspective the QX60 Hybrid certainly offers plenty to please on-the-go families. My only real quibbles relate to the slightly counterintuitive infotainment menu (well, I found it slightly counterintuitive at any rate, with no obvious home menu for starters), and the rather haphazardly placed climate controls (the air distribution button is located down with the temperature controls rather than up high with everything else, and the heated steering wheel control is down by your left knee, forcing you to take your eyes off the road to locate it).

From a value perspective, the QX60 Hybrid is a little trickier to summarize. Certainly the conventionally-powered front-wheel drive QX60, which starts at $44,445 including the $1,995 delivery fee, offers strong competition against other luxury seven-passenger crossovers such as Lincoln’s MKT (starting at $51,675 including destination), Acura’s MDX (starting at $52,110 destination in), and Volvo’s XC90 (starting at $52,515 including the pesky destination fee). But with its hybrid powertrain, AWD system, and included Premium package, the QX60 Hybrid raises the stakes considerably, clocking in at $55,945 by the time you add in the destination fee. Go for my test car’s higher-end options and you’ll add another $9,000 to the bill, for an as-tested price of $64,945.

At this price the QX60 Hybrid becomes more of a competitor for Audi’s Q7 TDI ($65,195 destination in), and if my experience is anything to go by the diesel-powered Q7 is likely to be nearly as efficient as the QX60 Hybrid in real-world driving, and certainly every bit as practical. True, the Q7’s official ratings aren’t so impressive at 11.5 / 7.1 L/100km city/hwy, but for whatever reason diesels seem to be able to achieve their rated consumption much more readily than most other vehicles.

All that said of course, the above price comparison does pit a fully-loaded QX60 Hybrid against a base Q7 TDI, and you can certainly expect the Audi to get plenty more expensive by the time you load it with all the toys included in this very well-equipped Infiniti. In the end, as always, it boils down to priorities, preferences, and how much you’re willing to spend up front for improved efficiency down the road.