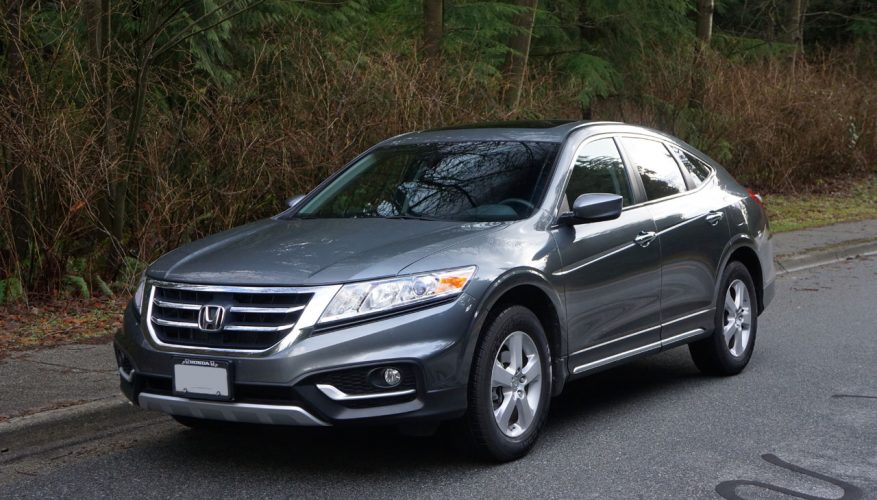 By: Trevor Hofmann
Unlike some cars that seem to appeal to the mass market, the Crosstour has had a smaller more loyal fan base since being introduced in 2009 as a 2010 model. The Honda Accord that this specialized model is based on is the latter, a car that could only offend you if you’re the type of person who’s offended by extreme goodness. The Crosstour, on the other hand, pushes the outer reaches of the styling envelope as it tries to create a unique market niche all on its own. The result is a polar reaction from passersby, some raving about it and others ranting.

To reduce the latter, Honda revised the Crosstour’s exterior design for 2013, with bolder frontal styling including a larger grille, plus a redesigned lower valance with SUV-like contrasting dark grey aerodynamic add-ons that wrap around the rest of the body, highlighted by attractive aluminum cladding and finished off with LED-enhanced fog lamps and much more rugged looking alloy wheels. They’ve certainly beefed it up, and I must admit that this mold-breaking automotive oddity is now better looking from head to tail.

What about inside? If I hadn’t driven the 2014 Accord, which is entirely new and brilliantly executed in every way, I’d probably have nothing but positive things to say about the Crosstour. From a styling perspective it’s much the same interior as the 2010 through 2012 Crosstour, with a harder albeit nicely textured plastic dash surface, nice soft-touch front and rear door uppers, soft leatherette door inserts, attractive matte-finish woodgrain dash trim, and a double-screen infotainment system, the upper recessed display filled with useful vehicle information such as instant and average fuel economy, Bluetooth connectivity, a standard a backup camera with guidelines, etcetera, with everything accessible via a small "Menu/Sel" button on the radio interface, and the lower screen for the audio system, which incidentally now incorporates a 360-watt AM/FM, 6-disc CD head unit with USB/iPod connectivity powering seven speakers for pretty decent sound. Despite nice leather upholstery, my tester didn’t include navigation, which would be another step up from its EX-L designation.

Honda improved rear visibility via a new wider rearview mirror while the upgraded Crosstour’s rear headrests were redesigned so that the view out back is less obstructed. This is important, as rear visibility isn’t a Crosstour highlight, its rear window quite large although laid almost flat resulting in a fairly narrow view. The view forward is much better, but the crossover’s relatively low ride height yet tall SUV-like hood and grille means that you might want to raise your seat up a bit to see what’s going on directly in front. On the positive, once you get used to the forward view you might just appreciate knowing exactly where the front of your car is, its blunt nose resulting in clear “guideposts” when parking.

On the road the Crosstour feels like a slightly taller, heavier previous-generation Accord, which it is. My tester, however, wasn’t made heavier because of the inclusion of all-wheel drive, but just because the vehicle itself weighs some 500 lbs more. All the same it tracks nicely on the highway, even over uneven surfaces, handles corners fairly well, and manages slippery conditions as well as can be expected of a large, heavy front-wheel drive vehicle. Of course stability and traction control come standard, helping to keep the Crosstour in the chosen lane no matter the weather, although when I took my particular example up the ski hill on a cold, snowy and, as I found out, icy day, it slipped and slid a bit during takeoff. Unfortunately I was approaching the checkpoint where park staff were asking if my vehicle was equipped with winter tires, chains, four-wheel drive or any combination of the above, at which point I just smile, nodded and claimed that this was a crossover SUV, so of course. They smiled, nodded and I drove forward, and for all points and purposes it held to the snow-covered icy road well enough, as long as I didn’t try to go too quickly.

Going too quickly wasn’t about to happen, mind you, at least uphill, as the 1,694-kilo (3,734-lb) Crosstour EX-L 2WD model I was driving was powered by a 192 horsepower 2.4-litre Earth Dreams four-cylinder with 162 lb-ft of torque, not exactly supercar performance off the line. The engine was new last year and discontinued in Canadian-spec Crosstours for 2014, so how did I end up with it? Honda left the car in its fleet so that we journalists could review it as a 2014 model, because there are basically no changes from 2013 to 2014, other than the powertrain that is. Fortunately, on two counts, I happen to know there is at least one “new” 2013 Crosstour with this very drivetrain currently available, this press model, plus you can still build a 2013 model on the brand’s retail website, so I’m guessing there are more out there; and for two, I’ve previously driven a Crosstour with Honda’s 3.5-litre V6, good for a much more amenable 278 horsepower and 252 lb-ft of torque, which incidentally is up seven horsepower over the engine it replaced when it was redone for 2013, while maximum torque occurs over a wider rev range. That engine now comes standard with all-wheel drive too, so you won’t have to worry about making it up the mountain on a cold winter’s day. The V6 transforms the car, giving it the kind of performance a midsize vehicle of the Crosstour’s heft needs, so losing the four-cylinder is nothing to cry over unless you happen to want its fuel economy benefits more than the V6’s power.

There’s more to the V6 that I’ve yet to divulge, however. The new standard six-speed automatic, which replaced Honda’s old five-speed unit last year, includes new paddle-shift actuation with the V6, better for driving dynamics as well as short-shifting the transmission to eke out more kilometres per tank of fuel. And the fuel economy?

Where the V6 is good for a claimed 11.1 L/100km in the city, 7.1 on the highway and 9.3 combined, the four-cylinder is quite a bit thriftier at an estimated 9.4 city, 6.4 highway, and 8.1 combined. Keep in mind that these are Environment Canada’s blue-sky numbers that you’ll never experience unless your daily commute is downhill both ways with a tailwind, but don’t blame Honda for our government’s incompetence. All cars sold in Canada are rated this way, so use these numbers for comparison purposes only and lean on the U.S. EPA for estimates more closely resembling reality until we get our act together next year with a new rating system for 2015 models. That in mind, the EPA rates the front-wheel drive four-cylinder Crosstour (which is still sold in the U.S., by the way) at a metric converted 10.7 L/100km in the city, 7.6 on the highway and 9.4 combined, and the same all-wheel drive V6-powered Crosstour that we get at 12.4 city, 8.4 highway and 10.7 combined, which is still very good for a midsize crossover.

But just how do we categorize the Crosstour anyway? Certainly we can give it crossover status, but is it as roomy as the midsize Pilot? Hardly. No, the Crosstour might occupy the same footprint overall, but it’s no match for hauling gear. Up to five adult passengers will find comfort front and rear, but cargo space under that steeply raked hatch is limited to 728 litres with the 60/40-split rear seatbacks upright and 1,453 litres when they’re folded flat. That’s a little more than half of what a Pilot can carry, but the more SUV-like crossover doesn’t handle quite as well in corners, uses a bit more fuel, and, to some peoples’ eyes at least, doesn’t look as sporty.

And I must say the Pilot’s cargo area isn’t finished off quite as nicely either, but it would be hard to beat the Crosstour in this regard. It’s actually so well detailed that you might get to thinking you’re sticking your stuff inside a premium vehicle. Under the load floor there’s a large and deep bin that can hide a lot of items you don’t want prying eyes seeing, a bonus in a hatchback design that inherently isn’t quite as safe from big city burglars as a car with a trunk, like the Accord.

The 2014 Honda Crosstour starts off at $37,490 plus about $1,800 for freight and pre-delivery prep, depending on where you live in the country. If you can snap up a four-cylinder 2013 model like the one I tested a couple of weeks ago you can save some serious bucks even before talking discount, as the MSRP starts at just $25,490 plus freight. Either way this unorthodox crossover remains a very well built, efficient and surprisingly utile vehicle, not to mention one of the more exclusive rides around.
©(Copyright Canadian Auto Press)
Car Shopping Tools