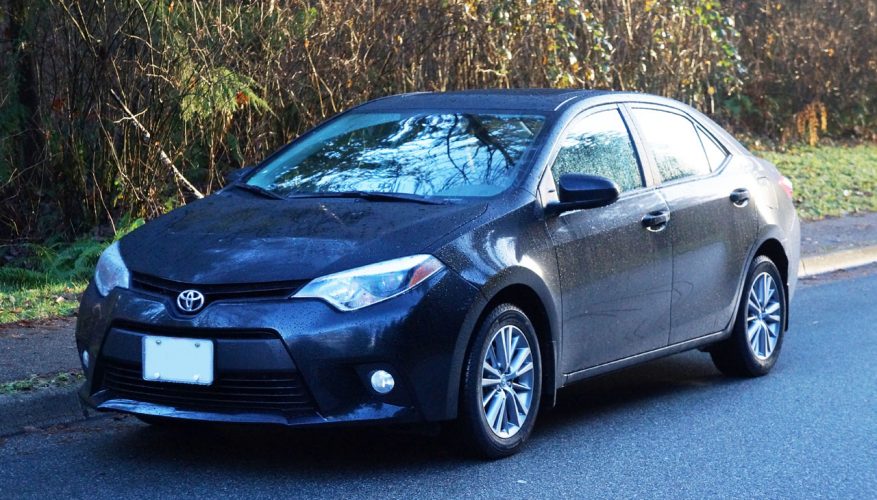 By: Trevor Hofmann
I’ve driven three different versions of Toyota’s new Corolla, and while S trim is my favourite to look at and the most fun around corners, and the more powerful LE Eco is my favourite off the line, this simpler LE is nothing to sneeze at either. Truly, even the base Corolla CE is good looking, with sporty styling that turns heads despite being an entry-level model in the rather common compact sedan class, and the LE is a steady step above that.

Ok, to be fair there aren’t many noticeable changes to the Corolla LE’s outward appearance over the CE, except for larger 16-inch wheels with covers. My particular tester, however, came with everything Toyota has on offer, other than adding the LE Eco or S package, so therefore a nice set of circular fog lamps added sportier flare to the front end design while those aforementioned 16-inch rims were done out in aluminum, and a mighty fine looking design at that. The final detail visible from the outside, albeit more noticeable inside, is the inclusion of a powered tilt and slide glass sunroof.

These items actually come as part of the second-tier Upgrade package, a $1,500 add-on to the base LE’s $19,500 window sticker (plus $1,520 for freight and pre-delivery prep) that also includes a leather-wrapped steering wheel. Above that Toyota offers Corolla LE buyers a $2,350 Premium package that adds automatic climate control, SofTex simulated leather upholstery, pleather door trim and an eight-way powered driver’s seat. Lastly, the $3,900 Technology package included with my tester gives you all of the above plus proximity sensing Smart Key with pushbutton ignition, an electrochromic rearview mirror with an integrated digital compass, navigation, and satellite radio. Not bad for $23,400. Oh, and incidentally the base Corolla CE will set you back a maximum of $15,995 plus freight, right on the money for its compact class.

Toyota has gone far to raise the Corolla’s game in every trim level with a very stylish cabin enhanced with soft-touch plastics in all the right places, some very cool blue pin striping across the dash and doors, and some premium-like metallic detailing, plus in the case of LE models some seriously high-end electronics. The 6.1-inch touchscreen infotainment display is bright, clear and as good as this segment gets, while its operation is extremely easy for those in the know and shouldn’t be all that hard to adjust to for first timers already experienced on smart phones. It even includes a standard backup camera system, while the stereo gets an extra pair of speakers for better sound quality. Other LE upgrades include automatic headlamps, variable intermittent wipers, automatic climate control, cruise control, heated front seats, and more.

The blue backlit climate control system in my tester couldn’t have been simpler, a great upgrade over the lesser models’ efficient yet more rudimentary manual system. Putting the finishing touches on my tester was the SofTex faux leather upholstery that looked just like leather and were piped around the edges in grey and then stitched together with contrasting grey thread. Very nice indeed.

But wait, I haven’t even mentioned what comes standard on the base CE. Believe it or not, pricy LED headlamps are standard on the entry-level Corolla, as is a tilt and telescopic three-spoke multifunction steering wheel, an AM/FM/CD/MP3/WMA audio system with an aux jack and USB input, Bluetooth hands-free, automatic powered door locks, powered windows, power adjustable heated colour-keyed exterior mirrors, colour-keyed door handles, 60/40-split folding rear seats that increase the capability of its 368-litre trunk, and a ton of premium-level safety equipment as part of Toyota’s Star Safety System including Vehicle Stability Control (VSC), Traction Control (TRAC), Anti-lock Brake System (ABS), Electronic Brake-force Distribution (EBD), Brake Assist (BA) and Smart Stop Technology (SST), plus much more. Capping off the safety list are all the usual airbags plus one for the driver’s knees.

After all these details you might be wondering how the new Corolla drives. Something that most auto scribes never mentioned when reviewing the outgoing model was that it drove quite well, handling corners more impressively than most of its peers while delivering a very comfortable, compliant ride. The new Corolla feels a bit firmer, but not annoyingly so. Fans of the car won’t be put off by its slightly tighter feeling suspension setup; in fact the ride might even be better. Just the same, the car seems more stable through the curves and more planted at highway speeds, while getting up to those speeds will be a déjà vu experience for previous owners being that engine output of its 1.8-litre Valvematic-enhanced four-cylinder remains 132 horsepower and 128 lb-ft of torque in base trim.

What is completely new, mind you, is the lineup of transmissions. Ok, not completely new. A six-speed manual now comes standard on the CE and S model (the old Corolla had a standard five-speed manual), while the old four-speed automatic can still be had with the base CE. That bit of soggy old news behind us, all other Corolla trims get Toyota’s brand spanking new CVTi-S, a continuously variable unit that is ultra-smooth in operation and delivers impressive fuel economy gains. My LE tester, which comes standard with the CVTi-S gearbox, is good for a claimed 6.8 L/100km in the city, 4.9 on the highway and 5.9 combined, and while we should be forewarned that these numbers will increase next year due to the Canadian government’s attempt to make fuel economy requirements more realistic, they serve as a good measuring post against the Corolla’s competition that are also using this same old rating system. The base Corolla CE, incidentally, is rated at 7.1 city and 5.2 highway with the six-speed manual and 7.4 and 5.4 when mated to the optional four-speed automatic, whereas the special LE Eco model gets a slightly improved 6.5 L/100km city estimate and much better 4.6 highway rating.

The CVTi-S transmission is a completely new design that uses what Toyota calls Intelligent Shift technology. It offers the usual smoothness of a CVT, but it goes further by adding seven stepped “gears” for a bit more fun behind the wheel. That said steering wheel-mounted paddles and Sport mode are only available in the previously mentioned Corolla S.

Yes, there are plenty of ways to doctor up your new Corolla, although drive it for yourself before deciding if you’d like to move up through the options packages or not. No matter the trim level, the 2014 Toyota Corolla is one very impressive compact sedan that should provide years of rewarding ownership, an experience that should also include bulletproof reliability.
©(Copyright Canadian Auto Press)
Car Shopping Tools