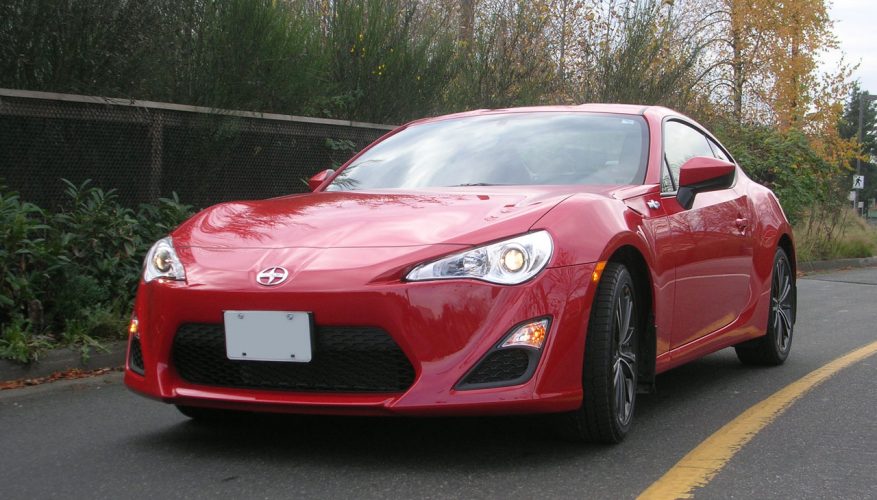 By: Simon Hill
If you’re one of those people who are interested in Scion’s FR-S, but have been holding off on purchasing one until the company puts in a bigger engine, wait no more. Not because Scion has put in a bigger engine – the 2014 FR-S is essentially unchanged from the 2013 version – but for two equally compelling reasons:

First, there is no plan to put a bigger engine in the FR-S. "A faster version … would be at the top of most people’s wish lists, but like the cabriolet, it is hard to justify a business case to push either model into production based on the current sales," explains Gerald Killman, European vice president of research and development for Scion’s parent company Toyota. Sales are by no means moribund: combined North American sales topped 20,000 units in 2013, which is up a healthy 35 percent from 2012 and "generally within original expectations" according to Scion USA vice president Doug Murtha. But it’s still nothing close to the 80,000-plus Mustangs that Ford sold in North America during 2013, and it’s only about double the sales of the exclusive and very expensive Porsche 911 (perhaps three times the 911’s sales if you add the twinsy Subaru BR-Z into the equation). For a mass-market brand like Scion, that’s merely okay.

The second and perhaps more compelling reason not to wait for a larger engine before buying an FR-S is that it really, honestly, doesn’t need a bigger engine. True, with a 0-100-km/h time of about 7.5 seconds the little Scion isn’t going to win many drag races, but it’s certainly no slouch. And keep in mind that sports cars aren’t about winning drags races – if you want to do that consistently you really ought to invest in something like a 1967 Camaro with a 700-horsepower 427 LS7 V8. No, sports cars are about driving enjoyment, and in the real world the Scion FR-S has all the power it needs to be an absolute riot to drive. Any additional horsepower would only serve to shred your tires and suck your driver’s license out the window and into the hands of the local police.

So how much fun is the FR-S? Scion put me into a Firestorm red 2014 FR-S for a week to find out, and the truth is I couldn’t keep the grin off my face. This is what car enthusiasts have long been begging for, a marvelous throwback to simpler times when cars weren’t all computers and electronics and fly-by-wire throttles, but were an unmediated experience – just you and the road, connected by four patches of rubber and a couple of mechanical linkages. Sure, the FR-S has stability control to keep you out of trouble as you go about your daily business, but switch it off and the FR-S displays all the tail-happy brilliance that rear-wheel drive is both loved and feared for. And unlike more powerful sports cars that I’ve driven, where the fun doesn’t really start until you’re already far beyond the speed limit, in the FR-S the fun begins as soon as you’re rolling.

Actually, the fun aboard the FR-S starts before you even drive out of the dealership, because at $27,945 (including the $1,495 delivery fee) the Scion is easier on the pocketbook than any other rear-wheel drive sports car except the V6 Mustang, and since the Scion comes in only one well-equipped "monospec" trim level there’s no temptation to go creeping up the price ladder (the base Mustang is reasonably well equipped, but there’s plenty of room for temptation, with a loaded V8 Mustang GT topping out at over $50,000).

As well as being one of the least expensive cars of the bunch, the Scion is also one lightest: at a very svelte 1,251 kg it’s down there with the Mazda MX-5 in terms of curb weight. On the road this gives the FR-S a tremendous handling advantage over the Hyundai Genesis Coupe (which weighs in at 1,525 kg), the Ford Mustang (1,588 kg) and the Chevy Camaro (1,687 kg).

Under the hood, as mentioned previously, the Scion carries on into 2014 (and the foreseeable future) with the same 2.0-litre horizontally-opposed 4-cylinder engine it launched with. This powerplant blends Subaru engineering with Toyota’s combined direct-injection/port-injection fuel management system to produce 200 horsepower, 151 lb-ft of torque, and a wonderful characteristic throaty growl. Transmission choices include a six-speed manual or a six-speed automatic with paddles for an additional $1,180. The manual transmission is undeniably better suited to the character of the car, with a precise feel and quick, easy throws.

Given the car’s light weight there’s plenty enough power underfoot to light up the tires, and if you turn off the traction and stability control you can easily initiate power oversteer, letting you slide the car around corners at a nice, controllable angle of drift even while staying well within the speed limit. Driven in a more reasonable manner, the FR-S feels responsive, balanced, and light-on-its-feet, with exceptionally good steering feel. It’s firmly sprung, but I didn’t find it jarring even on rough inner-city pavement. Rated city/highway fuel economy with the manual transmission is 9.6 / 6.6 L/100km, and the test car was showing a long-term average of 9.1 L/100km, although during my week with the car, in mostly city driving, I used 12.5 L/100m – apparently I was having more fun than the previous journalists!

Inside, the FR-S has snug, supportive front seats that grip you nicely in the corners, and there’s room (sort of) in the back seat to carry a couple of passengers legally, if not in exceptional comfort. By moving the passenger’s seat well forward I did manage to get my two teenagers into the car with me, but at six feet and five-foot-eight they were both quite cramped for leg space, and I was thankful there was no one needing to sit behind me.

While much of the interior is built from rigid plastic it’s a nice place to be, and the FR-S features a soft-surface dash, padded areas on the door uppers and lowers, a leather-wrapped steering wheel and gear knob, and plenty of red contrast stitching. The padding on the door lowers (and console sides, too) is one of two changes for 2014, the other being the inclusion of a 6.1-inch touchscreen infotainment system as standard equipment. I found the audio system to be decent sounding, and it offers good upgrade capability thanks to its dual DIN footprint, but that also means that it has a bit of an aftermarket feel to it. Bluetooth compatibility is standard.

In practical matters the trunk has a reasonably good surface area but not much height, so while it’s great for grocery shopping (or holding tires), it’s not so great for road trips. I also noted that the pull-straps for rear seatback can get wrapped round to the front of the seat, though I’m not actually sure whether this is a fault or a feature (it does offer the advantage that, provided you plan ahead, you can set things up to allow yourself to operate the catch either from the trunk of from inside the car).

All in all, the FR-S offers everything a sports coupe should: excellent comfort and motoring enjoyment for two, with room for a little luggage and (in a pinch) a couple of passengers, and it does all this without sacrificing your pocketbook at the time of purchase or at the pumps. If you foresee carrying more than one passenger on a regular basis the Mustang offers a bit more rear seat and trunk room, but when it comes to putting a smile on your face with light, nimble handling, Scion is hard to top.