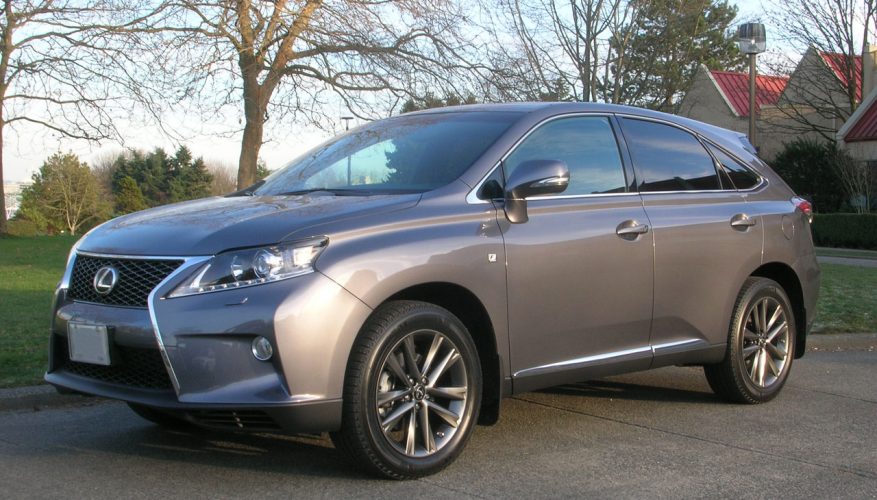 By: Simon Hill
The Lexus RX has been a marketplace winner since it was first introduced back in 1998. Its status as one of the earliest luxury crossovers on the market allowed it to quickly secure a position as the segment’s top-selling vehicle, and it has held onto that spot ever since, even while facing an ever-growing roster of competitors such as the Acura MDX, Audi Q7, BMW X5, Cadillac SRX, Infiniti QX70, Lincoln MKX, Mercedes-Benz M-Class, Porsche Cayenne, and Volvo XC90.

Based on the domestic market Toyota Harrier, the RX is now in its third generation, with the current version having arrived in early 2009 as a 2010 model. That’s a long time ago in automotive years, and now that Toyota has launched the fourth generation Harrier (which debuted at the Tokyo Motor Show in November 2013), a new RX is expected for 2015.

In the meantime, while the Lexus faithful await their new prescription for luxurious utility, Lexus spiced up the RX lineup in 2013 with the RX 350 F Sport version. The 2014 RX 350 F Sport carries over with only minor changes (a new 115V plug for the back seat, some additional connectivity features to support newer iPhones, and the addition of brake priming to the pre-collision warning system), so my Nebula Grey Pearl test car had a comfortable familiarity to it.

In the RX 350’s case, the "sport" in F Sport refers to the crossover’s appearance and ride rather than its raw performance: Under the hood, the RX 350 F Sport gets the exact same 3.5-litre V6 engine as the regular RX 350, delivering the same 270 horsepower and 248 lb-ft of torque. All-wheel drive is standard equipment, same as for the base model (this is a Canadian advantage – in the US the base model is FWD, with AWD being optional).

Where the powertrain differs is in the transmission department, because instead of a six-speed automatic the F Sport gets an eight-speed automatic with paddle shifters. This doesn’t offer a night-and-day performance advantage, but it does help the engine stay closer to its optimum operating speed, which aids daily-driving performance in a subtle way and also confers better fuel economy: At a city/highway rating of 11.2 / 7.7 L/100km the F Sport actually does about 0.5 litres better per 100km than the base model – go figure.

With my tendency towards short-hop inner-city driving I usually get far worse than advertised fuel economy, especially in larger crossovers and SUVs, so I was pleasantly surprised to record a real-world city average of 11.8 L/100km (by pure coincidence this is exactly on par with the official city rating for the base RX 350 with the six-speed automatic).

Outside, the RX 350 F Sport gets a much more aggressive – and I think much better looking – front fascia than the base model, with a honeycomb mesh grille, a deep full-width spoiler, and self-leveling HID headlights instead of the base car’s projector-style units. At the corners, 19-inch F Sport aluminum alloy wheels replace the standard 18-inch wheels, and the F-Sport gets a sport-tuned suspension with performance dampers. This helps keep the F Sport a little flatter and crisper in the corners than a regular RX 350, though it does impart a significantly firmer ride. That said, I stepped into the RX 350 F Sport after a week behind the wheel of a Scion FR-S, and compared to that little rocket the RX 350 F Sport was clearly still a big 1,970-kilo SUV with a tall centre of gravity and a suspension designed for plushness. For enthusiast drivers an RX 350 F Sport would likely win out over a regular RX 350, but it’s not really going to fool anyone into thinking it’s a performance sedan.

Five years after its introduction I find the RX 350’s interior design to be classy in a restrained-looking way, bordering on plain. But while there is a fair bit of rigid plastic used for the lower panels, there’s soft-touch material present where it needs to be, and the F Sport is certainly comfortable enough in the fully adjustable front seats. The rear seats are a different matter – they offer adequate space for sure, but they are mounted surprisingly low to the floor, so anyone taller than a child will find their knees up in the air and their thighs entirely clear of the seat squab. There’s also no provision for a third row of seating, so this is strictly a five-passenger vehicle.

The rear seats do recline to some extent, which is nice, and they fold properly flat, which allows you to make good use of the rear cargo area. There are convenient seatback release levers by the rear hatch too, but because the driver’s seat powers back to allow ease of exit/entry, it gets in the way of the rear headrest when you try to flip the seat forward.

On the road I found the Lexus RX 350 F Sport to be comfortable, competent, and practical, if not especially engaging. The engine has a nice growly exhaust note, the paddle shifters provide a certain amount of amusing distraction when desired, and the electric power steering is nicely weighted, but despite the go-fast goodies the F Sport still isolates you from the road too much to be truly entertaining to drive. The steering may be well weighted, but it’s not really communicative. The paddle shifters may be fun, but they’ll second-guess you if you do anything silly or aggressive. And the VDIM system (that’s Vehicle Dynamics Integrated Management) never really sleeps, so even if you switch off the traction control in a snowy parking lot the RX 350 F Sport still can’t really let loose and allow itself to get all sideways. I imagine that all of this luxurious isolation is a strong selling point for the regular RX 350, but from a sport-oriented point of view it doesn’t really work in the F Sport’s favour.

In more pragmatic matters, I remain somewhat confounded by Lexus’s infotainment menu system and mouse-style menu controller. The menu controller uses haptic feedback so you can feel when the pointer rolls onto the various buttons, and it’s genuinely impressive in its execution. In practice, however, I find it can be fiddly and inaccurate to use. And while the basic infotainment functions are simple enough to access, I found certain functions to be unnecessarily complex and confusing (trying to set the radio presets in particular). I also found the vehicle’s A-pillar to be quite obstructive.

These nitpicks aside, I can understand why the RX has remained so popular: At a starting price for the base model of $48,145 including the $1,995 destination fee, the RX 350 offers good doses of luxury, practicality, and usable everyday performance, on a well-crafted platform that’s renowned for its outstanding reliability. With the F Sport version, which starts at $57,395 destination in, Lexus has added a subtle dose of performance to the mix, together with a selection of the most popular luxury, technology, and convenience options. Even if it doesn’t make the RX 350 into an IS 350, the F Sport package gives Lexus’ popular mid-size luxury crossover a little extra flair and driving engagement. For enthusiasts who need the space of a crossover, that might be just what’s needed to seal the deal.