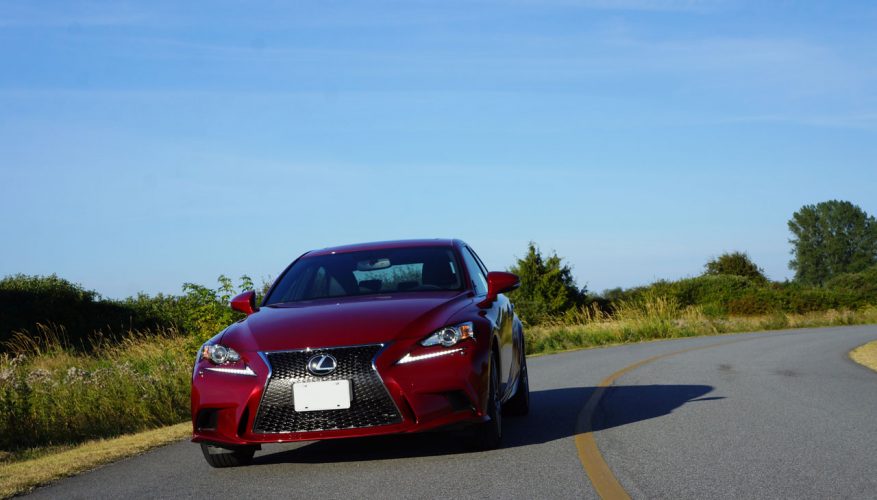 By: Trevor Hofmann
Most everybody agrees that Lexus makes good cars. Models like the midsize ES 350 luxury sedan and RX 350 luxury crossover have helped to build the Japanese premium brand’s enviable reputation for refinement and quality over the last quarter century, and resultantly have become two of the best selling models in their respective segments.

Along the way Lexus has helped to redefine exactly what luxury is, making personal service and reliability as important to premium buyers as leather-lined opulence and technological leadership. The J. D. Power and Associates 2014 Vehicle Dependability Study, which examines reliability of three-year old models, names the 2011 Lexus ES 350 the most dependable Compact Premium Car, the 2011 Lexus RX the most dependable Midsize Premium CUV, the 2011 Lexus GS the most dependable Midsize Premium Car, and the 2011 Lexus LS the most dependable Large Premium Car. The only reason the sportier rear- and all-wheel drive Lexus IS isn’t included on the list is that it was beat out by the ES 350 in the same category. So as not to put you off the model, where the ES 350 came in fourth overall, behind the top-line LS (tied for first) and RX (third), the IS tied for eighth overall. Yes, out of every vehicle made from all brands selling into the North American market during the 2011 model year, the IS 250 and IS 350 are rated eighth most reliable. Back to the brand, Lexus holds six of these most dependable positions out of the study’s top 10, the full-size LX SUV tied for 10th. That’s shocking domination of the luxury auto sector. The best any competitive brand could do was one model, and the only German brand to make the top 10 was Porsche with its 911 sports car, a car that doesn’t even compete with any Lexus model.

While most people will agree that reliability is a critically important component of the luxury buying experience (after all, none of us want to be stretched out in the back of our leather and wood-trimmed car’s rear quarters because we’re waiting for roadside assistance to arrive), most buyers in this sector look to styling, performance, features, and technology first. Fortunately for Lexus, they haven’t forgotten to include these aspects of the luxury experience. Styling, for instance, has been a key reason the brand’s sales have been growing as of late, Lexus’ “L finesse” design language now coming of age with a uniquely attractive “spindle” grille that’s been systematically spreading across the model lineup. The IS was most recently updated, and the brand didn’t stop at the grille, with the car’s exterior lighting going jagged to the point of looking dangerously sharp, and the rest of its body panels following suit with radical swoops and swerves that make the majority of passersby turn their heads and take notice.

That doesn’t sound very Lexus-like? Agreed. The brand has long been criticized for its staid conservatism, great cars that are lacking pizazz. Not so anymore, at least with the IS. Look across the showroom at the ES and it’s all understated elegance, albeit a lot more exciting than ever before. Likewise for most of the other models in the lineup, but since Lexus blew our minds with its brilliant LFA supercar, the sporty mainstream models that have followed are much bolder in how they go about attracting attention.

Like the exterior, the new IS boasts significant wow factor inside. Where the outgoing second-generation IS was criticized for being too conventional in cabin layout and style, a seemingly kneejerk reaction to criticism the company received after launching the visually confusing interior design of the first-generation IS, this new one is just right. It pulls numerous cues from other more recently updated models, most specifically the horizontal upper and mid instrument panel layout with its recessed infotainment screen, metallic centre strip protruding outward just below, a rich looking clock dead centre, and below that a sophisticated high-end audio look for secondary car controls, also recessed. It’s a complex design, but it’s not busy. Everything looks just right, and of course quality is as it needs to be to compete in the compact premium class.

The seats not only look fabulous, but are extremely comfortable. This is the case with all Lexus vehicles, the IS seats sportier with better lateral support than those in the ES, per se. The leather is top-grade, contrast stitching attractive and perfectly sewn, not to mention matching the stitching on my tester’s optional perforated leather-wrapped sport steering wheel. This is a gorgeous piece of work, and it feels oh-so engaging in the hands. All redundant controls are within a thumb’s stretch and they’re some of the easiest to operate the industry offers, almost as enticing as Lexus’ award-winning haptic sensing mouse-like infotainment controller on the lower console. Rest your hand on the ergonomically shaped device and toggle through the infotainment system with your pointer finger, Menu and Home buttons making the process of starting over ultra easy. It’s completely intuitive, and the display graphics are as good as any rival, while the optional Mark Levinson audio system delivered stunning clarity and rich tones. Likewise, my tester’s optional TFT primary gauge graphics ahead of the driver are superb. There was even a cruise control graphic that showed a picture of the cruise stalk controller highlighting options with arrows, so there’s absolutely no second guessing its operation.

Down on the lower console next to a button for defeating the stability control and one named Snow for applying reduced throttle response during slippery conditions, a rotating dial with markings for Normal (default), Eco, and Sport S/S+ modes might be the most intriguing controller for enthusiast drivers. Environmentalist enthusiasts (and those of us who just appreciate saving fuel) will like the Eco position, which retards throttle response and shifts gears earlier in the rev range to minimize consumption and therefore emissions, although Sport S/S+ does the exact opposite, increasing responsiveness across the board, immediately making the car’s Jekyll and Hyde personality known.

Two engines are available, the base IS 250 utilizing a 2.5-litre V6 capable of 204 horsepower and 184 lb-ft of torque and the IS 350 that uses a 3.5-litre V6 to make 306 horsepower and 277 lb-ft of torque. I’ve driven the former and it’s a smooth, refined powerplant that doles out decent performance, albeit a bit low compared to the class average, whereas the IS 350 loaned to me for this test was everything needed for thrilling acceleration off the line and confidence-inspiring passing power. The aforementioned Sport S/S+ mode turns the IS 350 into a bonafide sport sedan, with edgy responsiveness and gratifying aural accompaniment as rpm race higher up the rev range before shifting.

If you want Lexus’ state-of-the-art eight-speed automatic, opt for the IS 350 in rear-drive trim, the all-wheel drive model and both rear- and all-wheel drive IS 250 models incorporating the brand’s six-speed unit. There’s nothing wrong with the six-speed, as I was reminded during my IS 350 AWD test, but the eight-speed gearbox is much the same as used in the shockingly good IS F super sedan that sadly has yet to be replaced in this new generation IS, delivering lightning quick shifts between shorter initial intervals plus taller final drives for improved fuel economy. In short, it’s a better, more advanced transmission. The six-speed does its job effectively, however, and it’s well proven.

Giving my particular IS 350 a little more bite around the corners was the inclusion of the F Sport package, which increases the size of the AWD car’s wheel and tire package from 225/45R17s to 225/40R18s in the front and 255/35R18s at the rear, the same as with the stock IS 350 RWD, although special F Sport wheels are included. Additional F Sport features include a unique grille insert, an F Sport aero package, the deletion of the front fog lamps in order to integrate a revised front fascia, F Sport scuff plates, that gorgeous three-spoke F Sport steering wheel I mentioned earlier, as well as the Full TFT instrument cluster that Lexus dubs “LFA” in honour of a similarly designed one that came standard in its supercar, an F Sport shift knob, adjustable headrests, rear seat side airbags, a rear seat centre armrest, and 60/40 split-folding rear seatbacks. All of this is very good kit, adding $3,500 to the IS 350’s base price of $44,000, plus $1,995 for freight and pre-delivery prep.

Instead, ahead of the F Sport package there’s a Premium package for $2,800 that includes a set of 18-inch rims as well as a leather-wrapped heated steering wheel, heated and ventilated front seats, a backup camera, a powered moonroof, and the same rear seat side airbags, rear centre armrest and 60/40-split seatbacks as the F Sport package. Alternatively you can combine the two with the $6,800 F Sport Premium package, upgrade to the $7,500 Luxury package, take another step up to the $9,200 richer F Sport Executive package, or go for the gusto by adding the $9,850 full Executive package. My tester was one notch below full load, although this was fine with me as I’d rather have the bonus of F Sport upgrades and forgo the heated steering wheel, et al.

From a practical standpoint all IS models deliver more interior space than their predecessors, especially in back where compact sport sedans have traditionally lacked most. I can’t see anyone being disappointed with this car’s rear accommodations unless comparing it to an ES, although these two cars are clearly designed for buyers with different priorities. Likewise the IS’ trunk was as accommodating as I needed it to be, especially with the addition of split folding rear seatbacks for skis, etcetera, the trunk on its own measuring 310 litres.

Where IS 250 buyers might be worried more about fuel efficiency, those opting for the IS 350 AWD F Sport I tested aren’t likely to be so concerned. Don’t get me wrong, as fuel prices remain high most buyers have fuel economy on their radar and therefore all vehicles need to address the subject, but cars that perform as enthusiastically as the IS 350 attract a less pragmatic consumer.

The 2014 IS 350 is mostly about style, performance and features, mixed in with good usability and Lexus’ legendary reliability, an impressive combination that should cause more and more compact sport luxury buyers to take notice.
©(Copyright Canadian Auto Press)
Car Shopping Tools