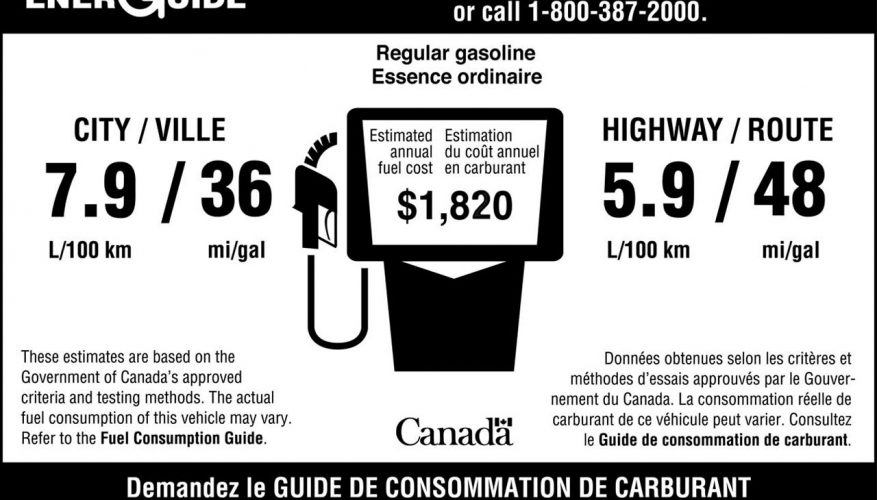 By: Simon Hill
It has long been acknowledged by Canada’s automotive press that the official fuel consumption ratings approved by Natural Resources Canada (NRC) are overly optimistic. It was also well known that the government intended to change its test procedures to more accurately measure real-world fuel consumption. Now, in a recent announcement NRC has confirmed that new improved testing procedures will be used on all 2015 light-duty cars and trucks, with 2014 models continuing to use the old test methods.

The new test methods will generate higher official fuel consumption numbers on vehicles’ EnerGuide labels, so NRC is emphasizing the importance in knowing what the numbers on the label really mean, “The change will take place in 2014,” NRC noted in its announcement.

The old test method is based on a simple two-cycle simulated drive in laboratory-controlled conditions. The city test begins with a cold engine and lasts just over 31 minutes. It covers 17.8 kilometres, with 23 stops, an average speed of 34 km/h, and no acceleration quicker than 5.2 km/h per second. The highway test begins with a warm engine and lasts just under 13 minutes, covering 16.5 kilometres with no stops, at an average speed of 78 km/h and a top speed of 97 km/h. Both tests are conducted at an ambient temperature between 20 and 30 degrees Celsius.

The new test is based on a more comprehensive five-cycle simulated drive. The first two cycles are the same as the existing city and highway cycles. In addition, three new cycles have been added to better represent how Canadians use their vehicles. These include: a cold-weather cycle, which is the same as the existing city cycle, but with the ambient outside temperature lowered to -7 degrees Celsius; an air-conditioning cycle, which is a shortened (approximately 10-minute) version of the city cycle, with the ambient temperature raised to 35 degrees Celsius and the vehicle’s air-conditioning running to cool the cabin; and a high-speed / quick acceleration cycle, which lasts about 10 minutes, covering 12.9 kilometres with four stops, with a top speed of 129 km/h and a maximum acceleration rate of 13.6 km/h per second (more than twice the acceleration rate of the standard city test).

Because the new tests are closer to the EPA tests used in the U.S. since 2008, a vehicle’s Canadian ratings will now be more in line with the ratings the same vehicle gets in the U.S. But for Canadian consumers buying cars over the next couple of years, it’s important to understand that manufacturers aren’t producing less fuel-efficient vehicles – it’s just that the new test methods used to determine the fuel consumption ratings are more reflective of real-world driving conditions and styles.
©(Copyright Canadian Auto Press)
Car Shopping Tools