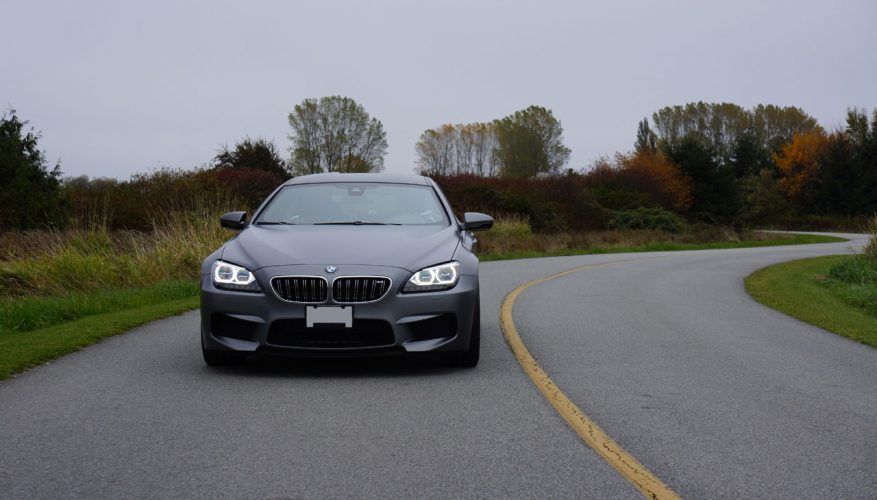 By: Trevor Hofmann
Over the past half decade BMW has been splicing its ever-growing model lineup into smaller more personalized segments, none more fractionalized than its 5 and 6 Series lines that now include the 6 Series Gran Coupe, a car that divides traditional 5 Series sport sedan buyers from those who might normally opt for a performance-luxury two-door like the 6 Series Coupe. The 6 Series Gran Coupe is finding its own niche buyers, as is the niche within a niche M6 Gran Coupe.

Yes, just like the Bayerische bunch has done numerous times before, BMW’s new four-door coupe has been given the full M treatment, and just like the M5 sedan and M6 Coupe and Convertible models, the M6 Gran Coupe gets the brand’s all-new direct injection TwinPower Turbo-infused 4.4-litre V8 that’s good for a staggering 560-horsepower at 5,750 to 7,000 rpm before redlining at 7,200, and an outrageously tractable 500 lb-ft of torque from as low as 1,500 rpm.

The full-throttle feeling off the line is shocking, first gear flying past with barely time to shift to second, an automated process if you leave BMW’s Drivelogic-enhanced seven-speed dual-clutch gearbox in Drive or manually-actuated if flicking the paddles is more to your liking. Honestly, it’s quicker if left to its own devices, with lightning upshifts and fabulous sounding rev-matched downshifts blipping away with every notch down the gearset, but more fun if control is handed over to the fingertips, and I highly doubt you’ll find yourself in need of exacting all of its performance all the time, its 4.2-second sprint to 100km/h so breathtakingly quick it might be a bit too much for the feint of heart.

Want more? Personalize the throttle response and shift mapping via iDrive and then press the steering wheel-mounted M-button when you want to utilize everything this super coupe has to offer. Unfortunately we get the neutered version of the ICU that caps velocity at 250 km/h, but rest assured that the real top speed is 305 km/h, something BMW has proven in its autobahn-blessed motherland.

Likewise its ride is firm, much more so than some might expect in a luxury car, partially due to stock run-flat tires. But then again, while the M6 Gran Coupe might be fitted out with all the accouterments of the jet set its mission is clearly not comfort for comfort’s sake. Certainly you’ll find more goodies than in most other BMWs let alone many of its pricier rivals, such as standard leather just about anywhere that soft-touch and piano black plastics along with laser-cut aluminum aren’t already covering (my tester had the $5,900 Full Merino Leather package which resurfaced most of the soft-touch plastic too), a suede-like Alcantara roofliner, and just above that a carbon-fibre roof which removes 22.6 kilograms (50 pounds) of overhead mass to reduce the car’s centre of gravity, two fabulous sets of sport seats front and back, a heated steering wheel, adaptive headlights, auto-dimming rearview mirrors, a rearview camera, park distance control, and top-tier electronics including navigation-enhanced ConnectDrive infotainment with telematics and even internet capability, plus a head-up display system that allows ready visual access to your speed, engine revs, warnings and additional info such as turn-by-turn navigation, but more so you’ll find a tantalizing display of almost every BMW M performance technology available starting with the blisteringly quick-shifting M double clutch transmission I mentioned earlier (a six-speed manual is a no-cost option).

Taking traction and stability control to new levels, BMW’s Active M Differential is a key ingredient of the 6 Series Gran Coupe’s M Chassis, technology that defies the car’s hefty 2,000-plus kilo curb weight (yes folks, that’s almost 4,500 pounds despite the aforementioned carbon-fibre roof and carbon-fibre-reinforced front fenders). You can feel the big Bimmer’s substantive girth, especially around town at lower speeds, but the car stays flat and true through tight fast-paced curves no matter how hard it’s pushed, with a slight tendency to oversteer if the electronic nannies are switched off (something BMW thankfully allows, although you’d better know what you’re doing) even though it’s a bit heavier over the front wheels with weight distribution apportioned 52.3 / 47.7.

Not enough performance? Go wild and add $8,500 M carbon ceramic brakes, or possibly better use of your extra cash would be the $6,500 Competition package that upgrades the wheels to 20-inch double-five-spoke alloys (the stock rims are also 20 inches in diameter and wrapped in Michelin Pilot Super Sports, measuring 265/35R20 up front and 295/30R20 in back), although you’ll need to opt for the $10,500 Executive package before you do that. The former also features increased power, more direct steering, a reworked suspension with enhanced M Dynamic Mode, plus black chrome tailpipes, while the latter ups the ante with improved audio (but not the awesome looking and sweet sounding FL-clarity-enhanced 1,000-watt Bang & Olufsen system included in my tester that costs an additional $4,900), a surround view monitor, M Multifunction front seats with ventilation and active capability to hold you in place during aggressive cornering, automatic four-zone climate control, a powered rear sunshade plus manual rear side sunshades, heated rear seats, soft closing doors, active blind spot protection, lane departure and collision warning, plus active LED headlights with high-beam assist. Additionally, night vision with pedestrian protection can be had for $2,500, while my tester’s matte Grey Frozen Metallic paint increased the price by $3,000.

We’re talking a lot of money here, the M6 Gran Coupe starting out at $127,900 plus $2,095 for freight and pre-delivery preparation, and then these options capable of pushing the price up quite a bit more (although still a relative bargain compared to more exotically branded machinery), so I’m willing to bet the cost of requisite premium fuel won’t ever be a deal-breaker. Still, overall fuel consumption is critically important in our evermore-regulated society, therefore some of BMW’s Efficient Dynamics systems, such as automatic start-stop that shuts down the engine at idle and brake energy regeneration come standard, allowing a pretty impressive claimed fuel economy rating of 13.3 L/100km in the city and a shockingly good 8.6 on the highway. While these numbers are useful for comparison purposes, a more realistic estimate can be found by searching out U.S. EPA numbers that when metric-converted equal 16.8 L/100km city, 11.7 highway and 14.7 combined, the latter number very close to the 15.1 L/100km average I experienced during my weeklong test; and take into consideration that my regular routes were mostly city, often clogged with traffic and quite hilly.

While some might wonder why BMW needs to fill every market segment ever created (let alone create a few of its own) with niche models like the M6 Gran Coupe, those who have aggressively driven this car through challenging roadways and also lived with it long enough to appreciate its practical attributes will understand. Certainly the M5 lives on for those who want a slightly more upright performance-tuned four-door, and the beautiful M6 Coupe and Convertible continue their dual-purpose pursuit of two-door dominance, but now the M6 Gran Coupe competently balances in between for an absolutely beautiful combination that’s capable of going head-to-head with Maseratis and Porsches, let alone Mercedes’ AMGs. Very impressive, this technological wunderkind certainly lives up to the M legend.
©(Copyright Canadian Auto Press)
Car Shopping Tools