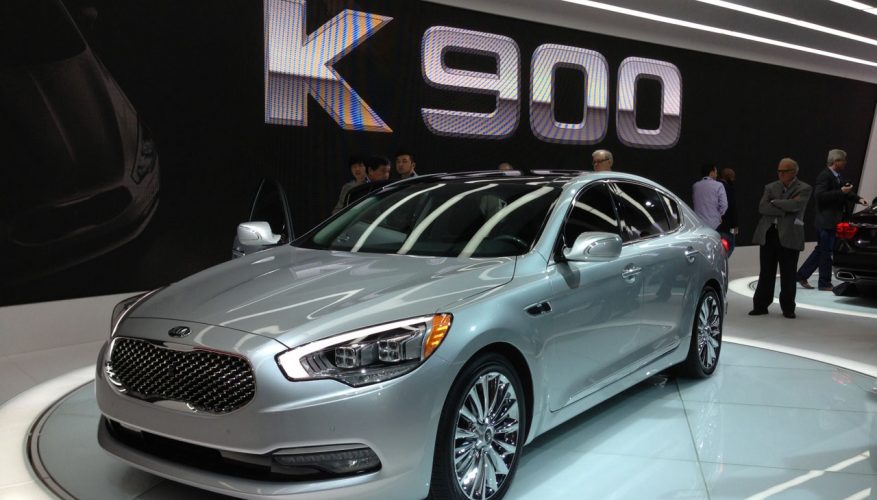 By: Simon Hill
For those who like to take things literally, one of the "big" Canadian debuts at Toronto’s Canadian International Auto Show was the full-size Kia K900 luxury sedan.

The South Korean automaker evidently believes the North American market is ready for a Kia-branded rear-wheel drive luxury car, and is introducing the new model on our shores mere months after launching it in the domestic market, although Kia’s marketing team inexplicably changed the car’s name for the North American market – it’s called the K9 back home in Korea (maybe they thought luxury cars and police dogs didn’t mix well).

Based on the same BH-L (VI) platform as the Hyundai Equus and Genesis sedan, the K900 is slated to go on sale in Canada later this year as a 2015 model, and will carry a suggested retail price of $49,995 in base V6 trim.

A V8 engine will also be available, the first such engine offered in a Kia sedan. The all-aluminum Tau V8 is a DOHC, 32-valve, 5.0-litre brute capable of dishing out 420 horsepower. Like the V6, it is hooked up to an eight-speed automatic and gets gasoline direct injection and dual CVVT variable valve timing on both the intake and exhaust.

Ensuring a smooth yet responsive ride is an advanced five-link fully independent front and rear suspension.

“This year marks Kia Motors’ 20th anniversary in the U.S. market, and the all-new K900 is a symbol of how far the brand has come and the next bold example of the challenger spirit that has benefitted Kia over two decades of growth and maturation,” said Michael Sprague, executive vice president of sales and marketing, KMA. “Kia’s rise over the last five years has been fueled by a willingness to challenge the status quo….  The K900 is the next logical progression for Kia. It demonstrates what Kia is capable of and will help redefine what the Kia brand stands for.”