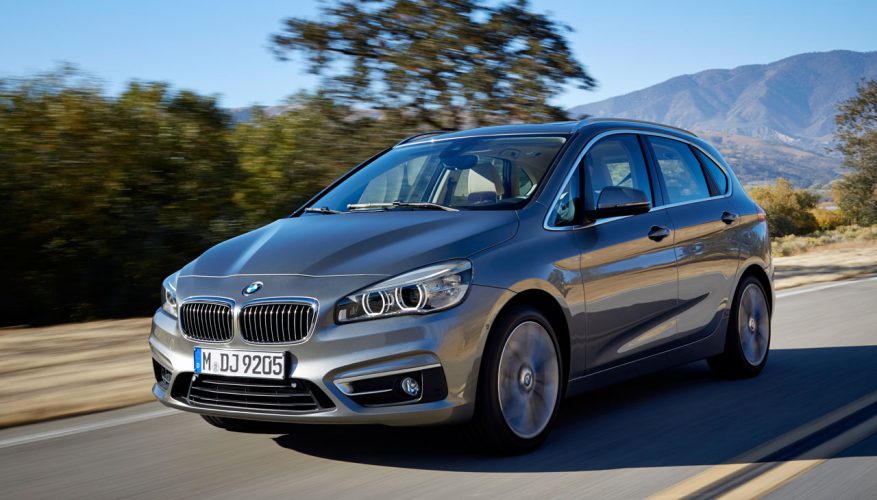 Indeed, with its five-door hatchback bodywork, three- or four-cylinder turbocharged engines, and – get this – front-wheel drive layout, the newest member of the 2 Series family overturns not just everything the German automaker had previously appeared to establish about its nomenclature, but perhaps everything it had established about it’s entire brand strategy.

As BMW clearly states in its press release, "The arrival of the BMW 2 Series Active Tourer … sees BMW expand its portfolio into another new model segment." It’s a move that mirrors the path taken by rival Mercedes-Benz when it introduced its successful luxury compact B-Class hatchback in 2006, and the 2 Series Active Tourer is clearly aimed at the same market.

Inside, the 2 Series Active Tourer promises a spacious feel, with a raised driving position, a hidden luggage compartment in the 468-litre trunk, and sliding rear seats that fold in a 40/20/40 split to provide up to 1,510 litres of luggage space. Features include an available panoramic sunroof, heads-up display, and BMW’s full suite of "Connected Drive" infotainment and assisted drive features, including camera-based active cruise control with stop-and-go feature.

Underpinning it all, the 2 Series Active Tourer has a strut-style front suspension, a multi-link rear suspension, and electromechanical power steering tuned to eliminate torque steer. According to BMW, the suspension was carefully tuned to provide BMW’s first-ever front-wheel drive car with "optimum driving dynamics and wonderfully precise steering feedback" in order to offer "the sort of driving experience the brand is renowned for."

The BMW 2 Series Active Tourer, which BMW calls "perfectly suited to cope with the growing challenges of urban mobility," will be available in standard, Luxury and Sport Line trim levels. It will launch in Europe later this year, and while future North American availability wasn’t announced by BMW, it is rumoured to be heading to our shores for 2015.