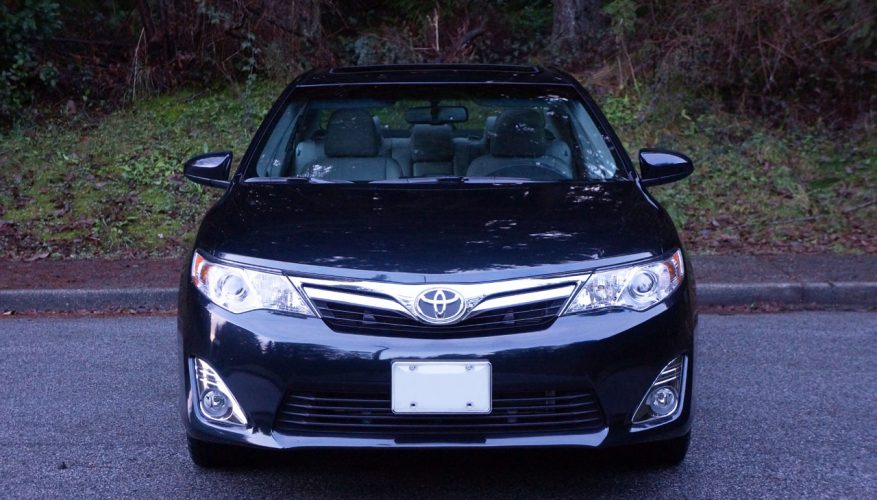 By: Trevor Hofmann
Why do so many people buy the Camry? Plain and simply because it’s a very good car.

This reality once again became apparent as I settled in behind the wheel of a 2014 Toyota Camry in top-line XLE trim, a car that hasn’t changed one iota from last year (and not much since this version was introduced in 2011 as a 2012 model) but nevertheless competes directly with entirely new models from other carmakers and no doubt will once again win on the sales front. In North America, more people buy Camrys than any other car, a title the Japanese brand has held for 11 years straight.

The overall styling and attention to detail is much more appealing than any Camry that has come before too, with soft-touch plastics covering surfaces you’ll most likely come in contact with, nice metallic accents highlighting key components and trim, and authentic looking simulated woodgrain tastefully applied. There’s nothing over the top about the Camry’s décor, but rather the interior comes together as a classic understatement, the way most Camry buyers like it. Likewise for the exterior design, it’s decidedly sportier than any previous Camry, but not so much to grab untoward attention. Rather, its classy chrome-enhanced lines still look good after all these years, a testament to a great initial design.

On the road the Camry feels good, balancing commendable handling with a compliant, comfortable ride. As with Camrys before, the bias leans towards comfort rather than performance, the sportier Camry SE seriously enhancing handling for those who want a little more excitement in their daily commute. While tuned for luxury, the XLE’s base 2.5-litre four-cylinder powerplant is a fuel miser, an engine and six-speed automatic transmission combo that sips away at regular unleaded at a claimed rate of 8.2 L/100km city and 5.5 highway. After driving around town with a number of highway stints during the workweek my real-world numbers came closer to the EPA’s combined metric-converted rating of 8.4 L/100km, which is extremely good for a large midsize sedan with 178 horsepower and 170 lb-ft of torque available. Those who want more get up and go can opt for a 3.5-litre V6 with 268 horsepower and 248 lb-ft of torque available, but of course claimed fuel economy takes a leap to 9.6 L/100km city and 6.3 highway, the more realistic EPA combined rating being 9.4 L/100km. The thriftiest Camry is the Hybrid that will cruise past yet more refueling stations thanks to an estimated 4.5 city and 4.9 highway (5.7 combined on the EPA cycle) in LE trim or 4.7 city and 5.1 (5.9 combined EPA) highway in XLE trim, and all use cheaper regular unleaded.

I took the Camry on an 800 km round trip during my test week, a mostly highway journey that allowed 6.5 L/100km economy despite being loaded down with three adults, one teen and a 10 year old, plus all our luggage. The four-cylinder had zero problems powering the weighty load up some steep mountain passes, helped along by a transmission that always seem to find the right gear, while trekking through an impromptu snowstorm that included a few patches of black ice proved to hardly be an issue at all, the Camry’s standard traction and stability control plus ABS/EBD and BA-enhanced four-wheel discs totally up to the task. Everyone was kept comfortable during each four-hour stint and my oldest daughter was especially impressed with the XLE’s upgraded audio, her iPhone plugged into the standard USB more often than not, while playing DJ to everyone’s enjoyment (she has great – read my – taste in music). Big water bottle cutouts in the front doors allowed for maximum hydration, while the rear doors incorporate a multi-use setup ideal for juice boxes.

My XLE tester isn’t the cheapest midsize four-door sedan on the market at $30,475 plus $1,620 for freight and pre-delivery prep, but then again it’s not the most expensive either. It’s difficult to do an exact price comparison with its peers as each rival comes with different features in standard and top-tier trims, but suffice to say the Camry is very competitive, a fact proven by its aforementioned sales lead (it’s one of those “ask the audience” realities). Some of the features the XLE includes that come standard on the base LE are Bluetooth phone connectivity, auxiliary and USB inputs for the stereo, satellite radio, a reverse camera, a tilt and telescopic steering wheel with audio and cruise controls, heated power mirrors, variable intermittent wipers, LED taillights, plus driver and passenger knee airbags that come as part of a full assortment of airbags, plus the previously mentioned ABS-enhanced four-wheel disc brakes with electronic brake-force distribution and brake assist, traction and stability control, Smart Stop Technology, front seatbelt pretensioners with force limiters, and more. Additionally, standard 60/40-split folding rear seatbacks add usable volume to an already sizable 436-litre trunk. The base Camry LE starts at only $23,700 plus destination, and the sporty SE I mentioned earlier can be had for a mere $26,985. The V6 adds $2,755 to the SE and $3,800 to the XLE, the latter a bit more expensive due to a higher-end stereo that comes standard with the upgrade.

Speaking of options, a variety of upgrade packages can be had with the LE, but nothing can be added to the top-line XLE. An extensive colour palette allows for eight options, albeit most are shades of gray, silver, white or black with a beige, green and blue hues offered too, while interior colours are limited to Ash and Ivory, depending on the exterior choice.

Whether enduring the morning commute, running errands around town or hitting the road with the entire family for a weekend getaway, the 2014 Camry is an ideal choice. It does it all with quiet, comfortable confidence, and returns excellent economy too. That it’s also one of the more reliable cars on the planet is just one more reason why Toyota’s midsizer is so popular everywhere you go.
©(Copyright Canadian Auto Press)
Car Shopping Tools