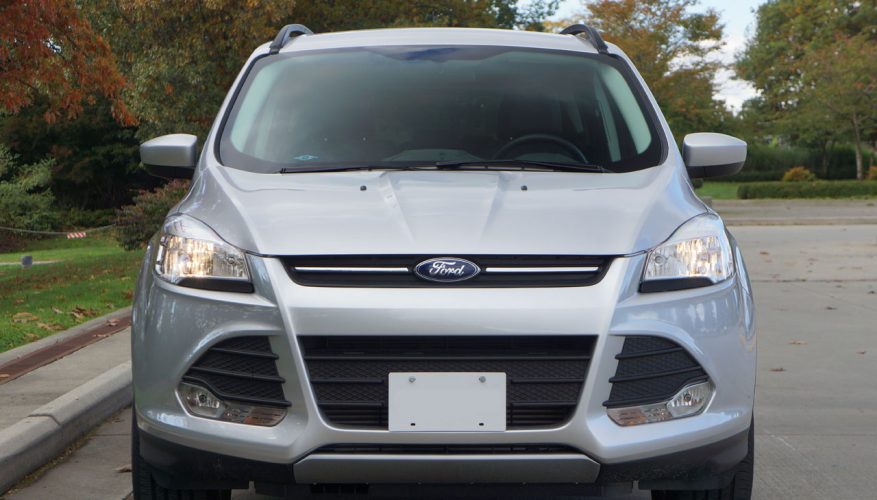 By: Trevor Hofmann
Just how good can a compact crossover get? Drive a new Ford Escape and you’ll know.

For me, the Escape encapsulates everything I want in a small CUV. I could drive this car all day and never get tired, and never get bored. What makes it so good? The Escape delivers an ideal combination of comfort and sport, and packages it all up in a totally utile family hauler that’s way larger on the inside that its lean lines make it look from the outside.

Yes, it’s a sharp looking little ute, but as attractive as its exterior sheet metal and stylish detailing is, the Escape really shines inside. The look is balanced form and function with a leaning toward modernism, my tester mostly dark grey inside with nice matte and bright metal detailing and zero woodgrain. Unlike some of its peers, the Escape boasts soft-touch dash plastics and soft-touch front door uppers, whereas the rest of the plastic surfaces are harder yet high in quality and nicely textured. Small things, like the power window switchgear, are impressively executed, the latter beautifully finished with bright chrome edges and nicely damped for a quality feel. Likewise for the rest of the Escape’s switchgear, which feels as if it should belong in a much more expensive crossover. A handy overhead sunglass holder is rubberized inside, protecting your pricy eyewear, while the five-way heated front seats in my tester go a lot farther in delivering personalized climate comfort than most in the class. The driver’s seat is six-way manually adjustable (the front passenger’s four-way), and comfortably supportive during a week that I was experiencing especially bad back pain.

An Escape highlight, as with all Ford products, are its digital displays, the CUV’s high-resolution colour graphics amongst the best in its segment and overall functionality of the MyFord Touch system second to none. Falling in line, my SE trimmed tester’s automatic air conditioning system was a breeze to operate while the standard six-speaker AM/FM/CD audio system delivered impressive sound quality and came packed with satellite radio and connectivity options including an auxiliary plug, dual USB ports, an SD card reader, audio/video RCA plugs and a 12-volt charge socket under the centre armrest. Another SE bonus is a three-prong 110-volt household-style outlet on the backside of the front centre console, ideally placed for either row of seats, while Ford SYNC connectivity, a rearview monitor, and automatic headlamps round out the SE features inside. On the outside, the Escape’s cohesive design is enhanced with a black upper grille including a chrome bar in SE trim, plus fog lights, a chrome beltline molding, body colour door handles, dual chrome exhaust tips, and 17-inch alloy rims on 235/55 all-season rubber, while Ford’s unique SecuriCode keyless entry keypad gets hidden on the B-pillar garnish. Ford’s Intelligent 4WD is available on SE trim, and the powers that be made sure my tester was so equipped.

Honestly, I can’t tell you how much the 4WD system manages do for the Escape’s overall performance considering the sunny, dry conditions I experienced during my test, but I’m guessing that its sophisticated design makes a big difference during winter’s slippery months. I’d certainly opt for 4WD being that chains are required if your vehicle isn’t four-wheel propelled when it’s snowing on my local ski haunt, and who wants to chain up when they don’t have to. The Escape’s 4WD system is fully automatic with no levers or buttons required, the system using two wheels when no slippage is detected to save fuel.

A favourite Escape button is the thumb rocker switch on the gear selector used for manually swapping cogs, and each gear holds at redline if slotted into Sport mode. It accesses a standard SelectShift six-speed automatic transmission, a superbly quick albeit smooth shifting gearbox ideally suited to my SE’s energetic 1.6-litre Ecoboost four-cylinder engine. That directed-injected, turbocharged engine really gets the Escape moving quickly thanks to 178 horsepower and 184 lb-ft of torque, but its real forte is fuel economy where it improves on the standard 2.5-litre Duratec four-cylinder while delivering better performance. Where the base Escape is good for a U.S. EPA claimed 10.7 L/100km in the city, 7.6 highway and 9.4 combined, the 1.6-litre powered SE gets an estimated rating of 10.2, 7.4 and 9.0 (strangely there are no EnerGuide estimates shown on Ford’s Canadian website, so take that into consideration when comparing the Escape to competitor’s more optimistic, albeit less realistic numbers).

The 2.5-litre four is almost as powerful as the 1.6 Ecoboost, rated at 168 horsepower and 170 lb-ft of torque, but if you really want your Escape to fly you’ll need to buck up for the top-line Titanium trim level that comes standard with a 240 horsepower 2.0-litre Ecoboost with 270 lb-ft of torque. I’ve driven it, and believe me it’s a lot of fun, while still returning EPA estimated fuel economy equal to 11.2 L/100km city, 8.4 highway and 9.8 combined. All engines run just fine on cheaper regular unleaded, although the Ecoboost pair will only make full power on premium (the 1.6 makes 173 horsepower on regular and the 2.0-litre makes 231). That in mind, there’s only a 5-horsepower difference from the 2.5-litre Duratec to the 1.6-litre Ecoboost unless pumping pricier premium.

Speaking of premium, the Escape feels more like a premium crossover than most of its rivals. Maybe it’s the German firmness to its ride, but that’s not to say its suspension isn’t compliant. Truly, I can’t see anyone complaining about unnecessary roughness, as its fully independent setup absorbs road imperfections well, but more will rave about the Escape’s deft handling. It takes to the corners with an agility that’s rare in the compact CUV segment, and its ABS-enhanced four-wheel disc brakes respond quickly and maintain their composure even after repeated stomps.

Additional standard safety features include emergency brake assist, SOS post crash alert, tire pressure monitoring, and all the usual airbags plus one for the driver’s knees, while the base Escape S also gets air conditioning, a tilt and telescopic steering wheel with cruise and audio controls, power windows, keyless entry, powered mirrors with integrated blind spot mirror-ettes, message centre and a trip computer, Ford MyKey, and much more for an entry price of $24,499 plus $1,600 for freight and pre-delivery preparation. The SE starts at $26,999 for the 1.6-litre and $28,599 for the same trim with the more powerful 2.0-litre, whereas 4WD can be added to either engine for $2,200. Last year’s SEL trim has been discontinued for 2014, but the full leather equipped Titanium starts at $33,499 in front-drive or $35,699 in 4WD.

Options include 18- and 19-inch wheels on SE and Titanium trims, roof rack crossbars, a cool hands-free “kicker” liftgate that only takes a swipe of your foot under the rear bumper to open (and it now works even if a Class II trailer hitch is installed), and much more.

As mentioned in the beginning, no matter the trim or price, every Escape delivers an interior that seems much larger than its exterior suggests, the cargo numbers being 971 litres behind the 60/40 split-folding rear seatbacks and 1,928 litres when they’re folded flat.

As you likely realize there’s a lot of competition in the compact crossover segment, which is exactly why you should put the Ford Escape high on your short list. Make sure to drive one before buying anything else, as it will most certainly impress.
©(Copyright Canadian Auto Press)
Car Shopping Tools