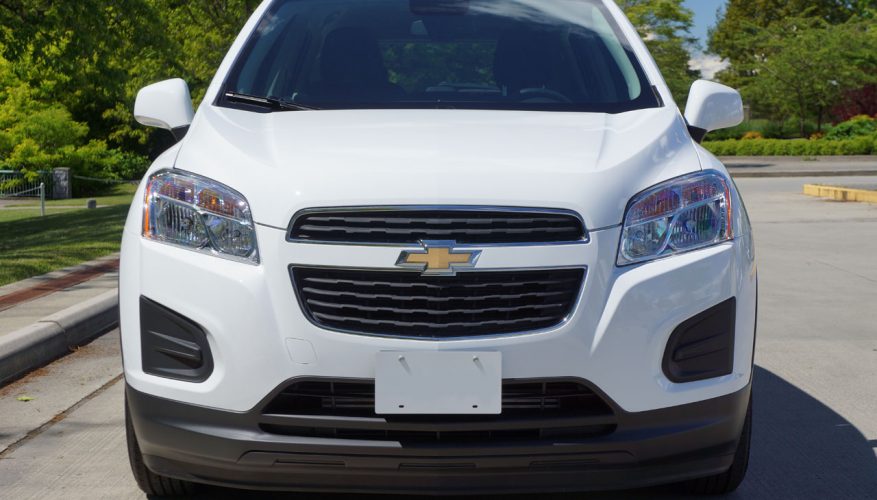 By: Trevor Hofmann
It wasn’t so long ago that options in the subcompact range were relegated to sedans and hatchbacks, with a smattering of two-door coupes left to spice things up in between. Today’s small car market offers a lot more, from these mainstream mainstays to tiny two-seat misfits, tall and boxy whatchamacallits and sportier five-door crossover utilities like this wonderfully unique Chevrolet Trax.

One look will tell you the Trax is like no other CUV on the market. First off its subcompact city car proportions make it ultra-easy to slot in and out of busy urban traffic, let alone those tiny “Small Car” parking spots always placed closest to shopping mall entrances. Yet while small, its tall profile means that interior headroom is plentiful, allowing much more accommodating seating for taller folk than many midsize or large cars. Likewise the Trax’ cargo hold is bigger than any vehicle so small should logically provide, measuring the size of a large sedan’s trunk behind the 60/40-split rear seatbacks at 530 litres, and expanding to a surprisingly commodious 1,371 litres when those seats are laid flat. Without argument the Trax is one of the easiest small cars to live with, yet it’s also one of the easiest cars to pilot around town.

Visibility is critically important amid heavy traffic, and the Trax’ amply large greenhouse provides a great view forward, to the sides and rearward, improved upon by the little CUV’s generous ride height. That tall driving position only comes about via better than average ground clearance, which amplifies wheel travel and therefore ride comfort. Even bumpy roads are made surprisingly smooth thanks to the Trax’ compliant suspension, whether traversing pavement or gravel. There’s nothing particularly sophisticated about its underpinnings, with MacPherson struts up front and a compound-crank setup in the rear, but the latter makes for a car that tracks well at high speeds on the freeway not to mention through quick curves, while remaining compact enough for the aforementioned interior roominess.

That interior is a fairly nice place to spend time, although you won’t be comparing it to any luxury rides if experienced in base LS trim. There’s zero soft-touch plastic inside while the polyurethane armrests feel a bit low rent, but then again its rudimentary albeit functional look improves as eyes wander over to the stylish chrome-rimmed primary instrument pod just ahead of the driver, featuring nice blue graphics around the tach and a large digital readout for speed and other functions. The classy chrome theme extends to the big dash-top vents at each corner, complemented by matte silver trim around twin storage pockets that flank the upper centre stack as well as the gearshift surround panel on the lower console, while the centre stack switchgear is actually very well executed, including a three-dial HVAC interface that’s efficient and easy to figure out. I like that the knobs are large and easy to use with gloves, whereas the useful bin atop the dash would be an ideal place to stow those gloves when not in use. A nicely shaped polyurethane steering wheel with a thick textured grip offers a sporty look as well as remote audio and Bluetooth functionality via the right spoke, and just below a high-end switchblade style key fob slots into the usual steering column-mounted ignition switch. I wasn’t as impressed with the Trax’ old-school rubber window surrounds that get dirty all too easily, causing me to question how they’ll hold up over the long run, but on the positive the car’s standard seat fabric looks as durable as any I’ve seen, not to mention really attractive with a cool circular pattern and blue contrast stitching in my tester.

As you might have guessed my test car was equipped in base LS trim, with front-wheel drive instead of optional all-wheel drive, albeit standard traction and stability control to make sure its zoomy 1.4-litre Ecotec four-cylinder’s 138 horsepower and 148 lb-ft of torque is kept in check. The engine makes the Trax blast off the line, the little CUV only weighing 1,363 kilos with the standard six-speed manual gearbox or 1,382 with the six-speed automatic I had fitted to my test car; a transmission that comes with DIY manual mode, no less, via a handy shift lever rocker switch.

Yah, I’m guessing you might not have thought the autobox Trax would come with manual mode let alone such an impressive powerplant in base LS trim by looking at its steel wheels with covers on 205/70R16 all-season rubber, although its body-colour exterior door handles and mirror housings should let on that Chevy didn’t skimp out on this little CUV runabout. Additional standard items include power remote side mirrors with helpful convex inserts, powered locks, powered windows, tilt and telescopic steering, Bluetooth hands-free phone connectivity, a driver information centre with compass, four-speaker AM/FM audio, a USB port, and a rear cargo cover.

If you want to dress up your Trax further, options include heated side mirrors, an auto-dimming rearview mirror, cruise control, a leather-wrapped steering wheel, leatherette upholstery (thanks but I’ll stick with the great looking standard cloth), a six-way powered driver’s seat, heated driver and front-passenger seats, a seven-speaker Bose audio upgrade, satellite radio, a Chevrolet MyLink Touch infotainment system with a seven-inch colour touchscreen display (this is a great system that’s easily worth what Chevy is asking), a rearview monitor including rear park assist, a powered sliding moonroof, a 110-volt three-prong power outlet, and 18-inch alloys wrapped in 215/55 all-seasons. So equipped the Trax LTZ is one sweet looking ride, although it looks mighty fine in mid-grade LT or base LS trim too.

That base Trax LS starts off at a very reasonable $18,695 plus $1,500 for freight and pre-delivery prep, while all-wheel drive can only be added to LT trim and therefore pushes the price up to $27,445 plus destination charges. A top-line 2014 Trax LTZ AWD will set you back $31,945, and if fully loaded with all available options will land at your local dealer for just over $34k plus freight.

For that money you’ve got yourself a veritable luxury ute, albeit in half pint size, and one that will deliver comforts and performance galore while eking out a claimed 8.7 L/100km in the city, 6.5 on the highway and 7.7 combined, or better yet if you opt for front-wheel drive Chevy estimates 8.1 L/100km city, 5.9 highway and 7.1 combined with the automatic or 7.8, 5.7 and 6.9 with the manual.

Possibilities seem endless in the subcompact segment these days, the 2014 Chevrolet Trax proving that you don’t have to go mainstream to get a well-equipped, fun-to-drive, completely practical fuel miser.
©(Copyright Canadian Auto Press)
Car Shopping Tools