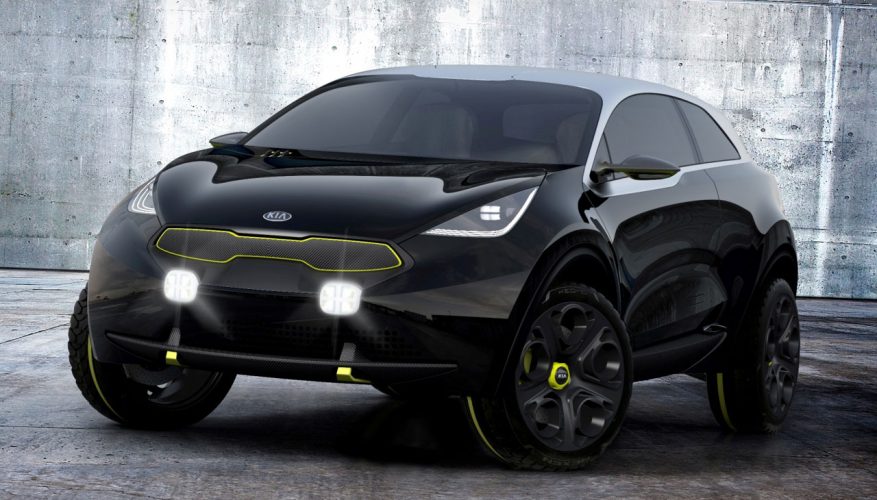 By: Staff
Kia made a strong eco-friendly statement at the Chicago auto show, with a trio of show cars confirming the Korean automaker’s commitment to hybrid and electric propulsion. In addition to the refreshed 2014 Optima Hybrid and the new 2015 Soul EV, which will be launched in select markets in 2014, Kia also showed the edgy, urban-oriented Niro Concept in the windy city. It marked the Niro Concept’s U.S. debut, following up its initial appearance in Frankfurt last September.

The Niro Concept’s dark “Nightfall” exterior paint is sharply offset by a brushed, stainless steel roof, with the two-finish construction giving a unique and high-tech edge to Niro’s outward appearance. This is accentuated by running-board-type “blades” above the lower side sills and dihedral butterfly doors that swing up high into the roof.

Inside, the Niro Concept continues its futuristic theme with a 2+2 layout that uses one-piece moulded front clamshell seats, with adjustable pedals and steering wheel to allow a comfortable driving position. The 50/50 split folding rear seats allow the Niro Concept to accommodate two extra passengers, and fold flat to form the front edge of a full-length carbon fibre load area. Ahead of the driver is a Supervision digital instrument cluster, with additional information – such as altitude, Bluetooth functions and satellite navigation – displayed on a centre console-mounted screen.

Under the hood, the Niro Concept has a variant of Kia’s turbocharged 1.6-litre Gamma engine producing 160 horsepower and hooked up to a seven-speed, dual-clutch transmission driving the front wheels. In addition to this, an electric hybrid system powered by regenerative braking delivers up to 45 horsepower to the rear wheels when road conditions or driving style require extra grip.

Further hinting that at least some of the Niro Concept’s mechanical and styling attributes may appear in a future production car, Kia says that "Niro may be a designers’ eye view of a future B-segment contender, but that doesn’t mean it is a pure flight of fancy."