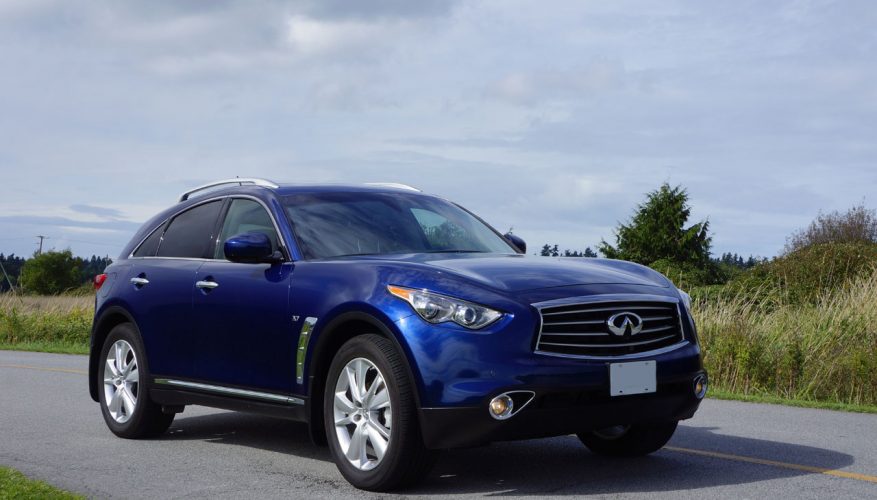 By: Trevor Hofmann
I’ve been a fan of the QX70 since it was dubbed FX, came in a slightly smaller package and was powered by 200 cubic centimeters less displacement. Infiniti launched its Bionic Cheetah in the outskirts of Phoenix, Arizona back in February of 2003, and I was there to test it out in the city’s suburban sprawl as well as a wonderfully serpentine stretch of tarmac that wound its way up to the top of South Mountain Park’s lofty summit. Never before had I driven such a nimble SUV, my review comparing it head-on with BMW X5s and Porsche Cayennes I’d tested previously, the FX35 (no V8-powered FX was available to test on the initial launch) much more sports car-like.

The 2014 QX70’s DNA continues to comprise cheetah genes, the new model a bit larger and heavier than the first-generation FX, yet the larger 3.7-litre engine capable of a lot more energy. The original 3.5-litre V6 put out 280 horsepower and 270 lb-ft of torque compared to the new model’s 325 horsepower and 267 lb-ft of torque. Yes, there’s a little bit less thrust, but that’s more than made up for by the new car’s advanced seven-speed automatic transmission that includes driver Adaptive Shift Control (ASC) and Drive Sport (DS) mode with impressive Downshift Rev Matching (DRM) technology, the old much simpler transmission making due with five forward speeds. A taller final drive allows for better highway fuel economy too, the original model capable of a claimed 10.0 L/100km when cruising and the new one a much more appealing 9.1. That it’s even thriftier in the city should come as yet better news, the original achieving an estimated 14.3 L/100km in town and the new 2014 model claimed to get 12.9.

That just shows how far we’ve come in 11 years. The QX70’s story of more size, power and weight yet better performance and fuel economy is one of many such similar scenarios, its main rivals from BMW, Mercedes-Benz and Porsche touting their own efficiency progress. The Germans are now boasting automatic idle-stop systems that shut their engines down while they’d otherwise be idling, something we’ve yet to see from Japanese non-hybrids, while the strong performance and stingy fuel economy available from German turbo-diesels is legendary.

A diesel may not suit Infiniti’s performance-first image, mind you. Other than the family-focused JX35, now dubbed QX60, Infiniti has long been the truest of performance brands, and the QX70 not only fits the mould, it could arguably be seen as the torchbearer. Like I said in the beginning of this review, it began life by spraying dirt on the X5 and Cayenne, and since then the newer more radically penned second-generation FX (that moves into 2014 with nothing more than the QX70 name change) carries this message loud and clear. Lexus has nothing that directly competes, its RX 350 competent in its own right, albeit nowhere near as sporty even in top-line F Sport trim, and the larger seven-passenger Acura MDX an enjoyable driver’s SUV, but due to its size and weight not as capable through the corners as the lithe QX70.

With all this emphasis on performance you might think the QX70 is somehow lacking in luxury, but nothing could be farther from the truth. The woods are plentiful and finished in the richest gloss the industry has to offer, while chromes and brushed metals highlight details. All other surfaces that aren’t covered in soft quilted leathers are made from high-quality pliable plastic, delightful to the touch and ideal for sound absorption. The seats are supremely comfortable, but not in a grandma’s sofa sort of way. They balance firm support with just enough cushioning to not rub any bony parts the wrong way, and their 10-way driver and eight-way front passenger power adjustment means you shouldn’t have any trouble finding the right position to keep your back unkinked even after a long drive.

My tester’s front seats were not only heated, but climate controlled, meaning they were ventilated for a cooling effect when hot weather might otherwise scorch the black leather-lined cabin. Climate controlled seats are just the beginning of the $5,650 Navigation and Deluxe Touring Package, which also includes maple interior accents, aluminum foot pedals, a rear cargo cover and 20-inch alloy wheels. Infiniti also offers a $9,150 Technology Package that adds Intelligent Cruise Control with full-speed range and Distance Control Assist (DCA), rain-sensing wipers, Lane Departure Warning (LDW) with Lane Departure Prevention (LDP), Forward Collision Warning (FCW) with Intelligent Brake Assist (IBA), and front pre-crash seatbelts, but oddly it can’t be had with the above mentioned Navigation and Deluxe Touring Package. The only way to get all of the above in one car is to upgrade to the $65,100 V8-powered QX70 and then add the $6,850 Sport Technology Package for an SUV that hits the road at $73,945 including Infiniti’s $1,995 freight and pre-delivery prep charge. The base QX70 starts off at $53,350 plus destination.

I should mention some of the QX70’s standard features too, which include all of the usual luxury fare plus bright, attractive Fine Vision electroluminescent primary gauges, proximity sensing Intelligent Key access with pushbutton ignition, a brilliant sounding 11-speaker Bose AM/FM/CD/DVD/MP3 audio system with aux and USB inputs as well as illuminated steering wheel controls, a rearview monitor, a powered tilt and slide glass sunroof with sunshade, a powered liftgate, automatic HID headlights, LED brake lights, Intelligent All-Wheel Drive, and 60/40-split rear seatbacks that accommodate 702 litres of cargo in behind when left upright or 1,755 when folded flat. That makes it a little bit roomier than a Porsche Cayenne with all seats in use, although a tiny bit less so when dropped down.

Fully functional and about as sporty as SUVs get, the 2014 QX70 carries on where the already impressive FX left off. Truly, for your money you’ll be hard pressed to find a better sport utility.
©(Copyright Canadian Auto Press)
Car Shopping Tools