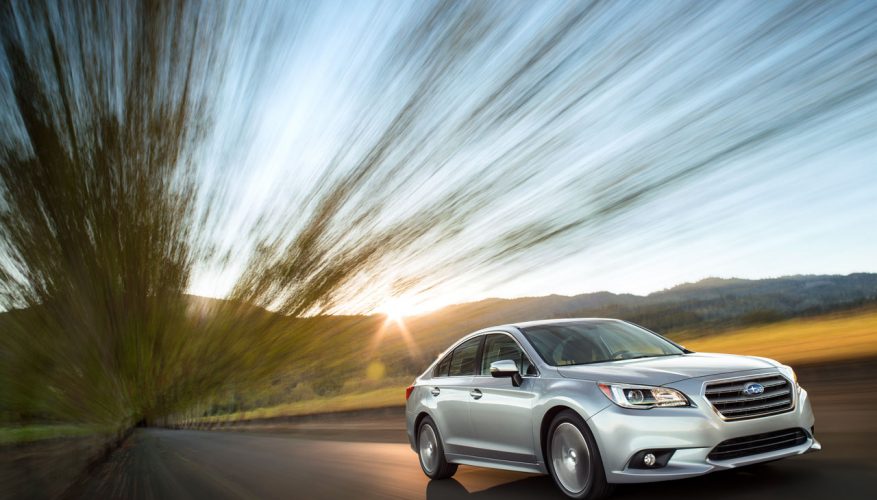 By: Simon Hill
One of the big debuts at the Chicago Auto Show was Subaru’s next-generation Legacy sedan, and as promised by the teaser images released last week and by the Legacy Concept displayed at the 2013 Los Angles Auto Show, the new car features a sleek profile and a bold front fascia.

In addition to being modern looking, the new bodywork offers a 10-percent improvement in aerodynamic efficiency, aided by a standard active grille shutter system that further reduces wind resistance when closed.

Under the hood the 2015 Legacy continues to offer either a 2.5-litre four-cylinder boxer engine or a 3.6-litre six-cylinder boxer, but the manual transmission offering has been dropped from the lineup, with all cars now getting Subaru’s Lineartronic CVT (continuously variable transmission).

Updates to the four-cylinder have improved power, refinement and efficiency, with a two-horsepower bump to 175 horsepower. Peak torque remains at 174 lb-ft but is spread over a broader rev range for more responsive performance. The six-cylinder engine produces 256 hp and 247 lb-ft of maximum torque.

The automatic CVT has been refined to reduce friction, contributing to an overall fuel economy improvement of 10 percent or more, and all models are equipped with a hill start assist system that holds the vehicle in place until the driver applies the throttle.

Inside, Subaru promises more room and greater refinement, with a new acoustic windshield, liquid-filled engine mounts, thicker panels in key locations, and increased insulation working together to reduce interior noise levels. With the cabin enlarged by 45 litres, the new car offers more shoulder, hip, elbow and legroom than the previous car, while retaining almost the same exterior footprint. The trunk is also slightly bigger, up 8.5 litres to 425 litres.

In addition to what Subaru says is a significantly upgraded infotainment system, the 2015 Legacy comes standard with a rearview camera, now located closer to the centre of the car for more natural imaging, and there’s also standard welcome lighting that automatically turns on cabin illumination and exterior lights as the driver approaches or departs from the car.