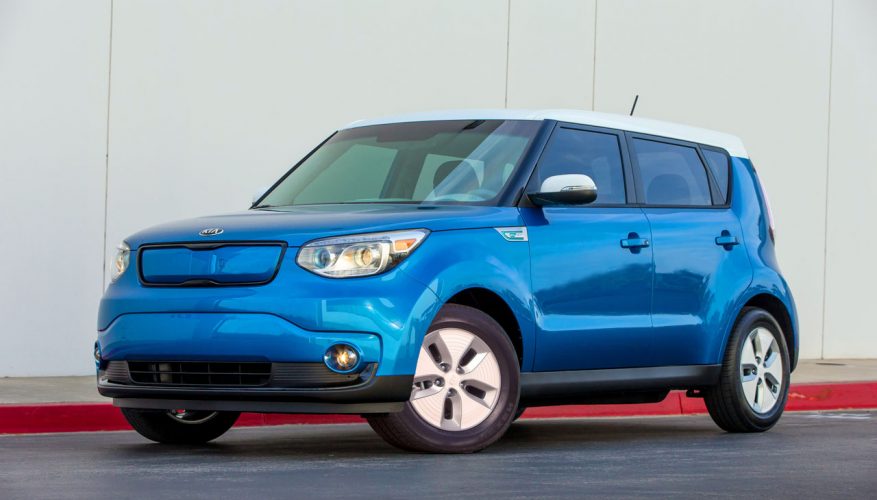 The latest carmaker to plug in to the expanding EV market is Kia, which introduced its all-new 2015 Kia Soul EV at the Chicago Auto Show. Emphasizing the automaker’s commitment to efficient, low emissions vehicles, Kia showed the Soul EV next to an updated version of the company’s Optima Hybrid sedan and the funky crossover-style Niro Hybrid Concept. Unlike those hybrid models, however, the Soul EV is Kia’s first completely battery-powered vehicle.

"The new Soul EV is at the forefront of Kia’s ‘Clean Mobility’ program and will offer an even more environmentally friendly option to our customers when it goes on sale later this year,” said Orth Hedrick, vice president of product planning at Kia Motors America.

Externally, the Soul EV retains the same eye-catching bodywork as its gasoline-powered siblings, but with the grille space occupied by a body-coloured sliding door for the charging port, leaving just the outline of a grille. Initial models were also shown with contrasting roofs, setting the Soul EV yet further apart.

Under the hood, the front-wheel drive Soul EV gets an 81.4-kW, 109-hp electric motor, producing 210 lb-ft of torque. Supplying power to the engine is a 360-volt 96-cell lithium-ion polymer battery engineered with a graphite-based anode, gel electrolyte, and ceramic cell separators for thermal stability, safety, and high capacity. Total battery capacity is 27kW hours, good for an estimated 130-160 km of range.

Dual charging ports allow recharging from either a standard 120V outlet or a 240V EV charger. Kia says recharging times vary from 24 hours for a fully depleted battery using a standard 120-volt outlet, to under five hours when plugged into a 240-volt outlet. An 80-percent charge can be achieved in as little as 33 minutes with a 50 kW-output charger.

Inside, thanks to the battery’s flat design and location beneath the floor, there is only a slight reduction to rear seat legroom (from 993 mm to 914 mm) compared to the gasoline-powered Soul. There is also a minimal loss of rear cargo space (reduced 144 litres to 541 litres total), as the space under the cargo floor is used for the battery cooling fan and storage of the standard 120V portable charger.

Kia paid careful attention to the Soul EV’s climate control system design, since air conditioning is one of the largest energy drains in any electric vehicle. The Soul EV’s HVAC system features four key technologies to help extend range by minimizing energy draw. These include an available heat pump (optional on Base, standard on “+”), individual ventilation, scheduled ventilation (which can pre-condition the cabin air while the car is still plugged in), and air intake control to help regulate interior temperature through carefully managed cabin air recirculation.

Convenience features aboard the Soul EV will include a unique version of the Kia’s UVO eServices, which will provide downloadable apps to help owners find nearby battery chargers and determine whether they can travel to a specific destination on the current charge, among other things. The Soul EV will also come standard with navigation, rear camera, hands-free Bluetooth, and a 6.6 kW onboard charger.

The Soul EV will initially be sold in California and Oregon in the West and several Eastern states including New York, New Jersey and Maryland – the regions with the largest EV markets and infrastructure. No word was released about possible Canadian sales.