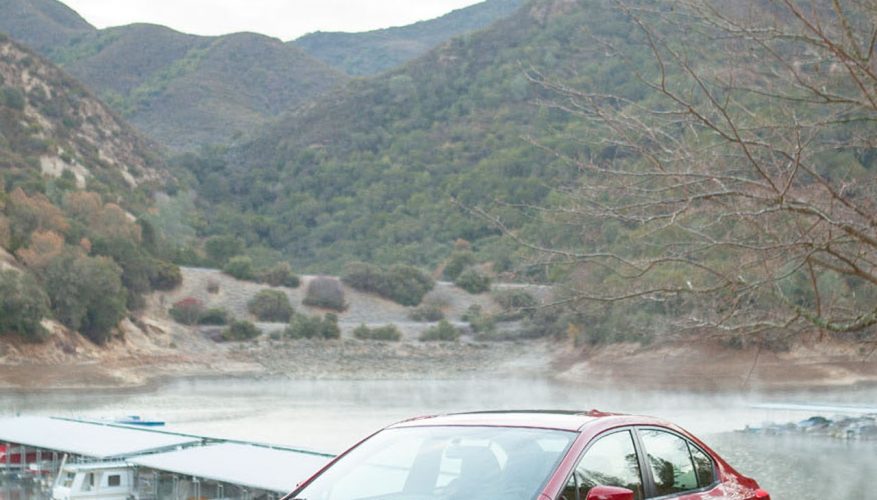 By: Lyndon Conrad Bell
For the 2015 model year WRX, Subaru has dropped mention of the Impreza nameplate. The car is now simply known as the 2015 Subaru WRX. And with it, the boyishness of previous iterations of the car has been allowed to fall by the wayside as well.

Starting with the look of the car: the huge wings, giant air scoops, and overall cartoonish demeanor have been eschewed in favour of a more subtle, sophisticated, almost European look. What’s more, the hatchback, so loved by the wannabe rally-king set, has been dropped as well. You’ll now get your WRX as a sedan only, just as it was when the model first came to North America back in 2004.

Furthermore, a continuously variable transmission has been fitted to the car, and perhaps most telling of all, the suspension system has been calibrated for optimal performance on pavement. This is a significant change from previous iterations of the WRX. Those cars, hewing more toward the World Rally heritage of the car, left quite a bit of compliance in their suspension systems. This always hamstrung the WRX when its more potent STi sibling was lined up for a street fight next to the Mitsubishi Evo-its closest competitor. And let’s face it; these cars are almost always driven on pavement-not dirt.

What we have here is something of a new philosophy for Subaru’s high protein sedan. Further, the WRX and the Impreza-the model upon which it is based-now have very little in common style-wise. According to Subaru’s representatives, only the roof and the rear decklid of the WRX are identical to the Impreza. The doors, front fenders, hood, bumpers, headlights, and taillight clusters are all specific to the WRX. So while you might see a hint of Impreza in the overall shape of the car, the detailing of the WRX really does make it distinctive from its more sedate cousin.

Long story short, this new WRX is indeed a more sophisticated performance car. Where previous versions of the WRX kind of resembled what would happen if somebody were let loose with an aftermarket performance catalog specifically tailored to the car, this version of the WRX looks like everything was thought through and integrated in a wholly organic fashion.

A new six-speed manual transmission conducts power to all four wheels as standard equipment. As we mentioned before, also new to the WRX is an optional continuously variable transmission (CVT). And while this might well sound like a strange offering for a performance car, the reality is it works quite well. In most cases, given the way the transmission is calibrated, you won’t even notice it’s a continuously variable unit. By the way, when you look at the Subaru’s sticker, if you see “Sport Lineartronic”, you’re looking at the CVT.

Acceleration from zero to 100 km/h is quoted at 5.5 seconds with the six-speed manual and 6.0 seconds with the Sport Lineartronic. Driving the car, the first thing you’ll notice is the sharp throttle response. Push the gas pedal and the 2015 WRX responds immediately. The engine is free winding, creamy smooth, sounds terrific, and does its thing with just a hint of turbo whistle to remind you it’s force-fed.

Ask for a change of direction and you’ll note near instantaneous helm response. The steering is very quick, but it’s also nicely linear. You get exactly what you ask for. Happily, to go along with the improved power and additional grip, Subaru improved the braking system too. For more arresting ability, a larger set of brake rotors and more robust clamping power from the calipers were prescribed to provide fade-free operation-delivered with precise modulation.

In sum, the overall character of the 2015 Subaru WRX reflects the significant attention its development team paid to improving quality, style, and performance. The interior treatment is much more handsome and substantive, while the exterior styling is considerably more sophisticated.

About the only complaint we can lodge against the new WRX is the amount of road noise filtering into the passenger compartment. Overall though, the 2015 Subaru WRX is easily numbered among the cars we love.
©(Copyright Canadian Auto Press)
Car Shopping Tools