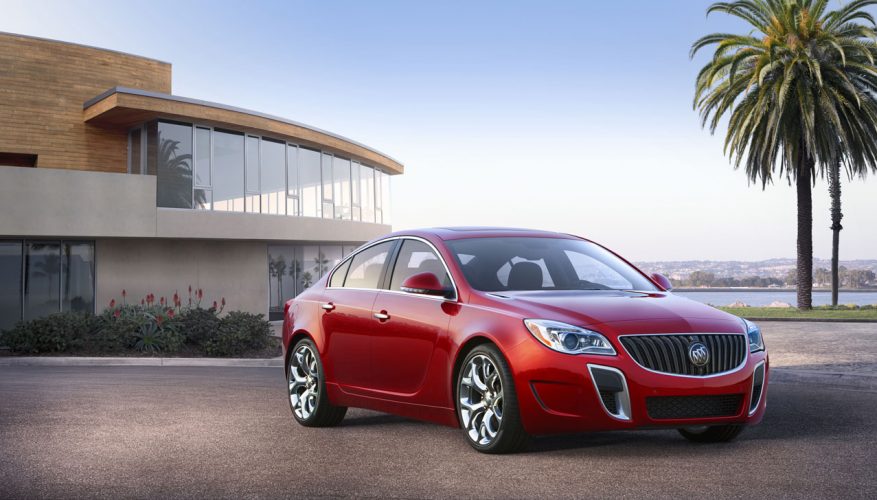 By: Lyndon Conrad Bell
Folks, Buick has changed, and then again, it really hasn’t. Spend some time in the new 2014 Buick Regal GS and you’ll experience an athleticism long disassociated with the tri-shield brand. The soft “doctor’s” car demeanor the marque came to represent is gone-sort of. Yes, the 2014 Regal GS is luxurious like you’d expect a Buick to be. It is also in possession of a dignified look and stature like you’d expect a Buick to have. But it goes like the European sport sedan upon which the Regal is based: The German Opel Insignia. Which is where Buick has changed-sort of.

You see, in the past there have been a number of performance-oriented Buick models. It’s just been quite a while since the company brought a standout performance car to market. The last ones of any real significance were arguably the turbocharged Regal models of the late 1980s. In fact, the 1987 Buick Regal GNX was faster than its Corvette contemporary.

Of course, today a performance car has to be about more than just blistering acceleration. It needs to be exceptionally responsive, stop well, corner adroitly, steer nearly telepathically, and if you’re trying to play in the luxury sports arena, you’ll need to provide a smooth and comfortable ride-on top of spirited handling. This can be a formidable task. But it is one the new Buick Regal GS pulls off with considerable competence-for the most part.

Turbocharging once again pays a key role in the model’s prowess. In this case, the turbo force-feeds a 2.0-litre inline four-cylinder engine, inciting it to produce 259 horsepower and 295 ft-lbs of torque. The twin-scroll turbo spins up quickly, so the engine drives more like a V6 than a turbocharged four. It is smooth, tractable, and delivers a nice exhaust note-with just the right hint of sportiness-while still maintaining the dignity a Buick ought to have.

Two transmissions are offered, a six-speed manual and a six-speed automatic. However, there is a catch. The Regal can also be had with either front-wheel drive or all-wheel drive. But, if you opt for all-wheel drive, you’re locked into the automatic transmission. Which wouldn’t be such a bad thing except we noticed a significant lag between throttle application and response from the engine with the automatic transmission. We were told this was to ensure the smoothness for which Buicks are known. But we’ve driven a number of very smooth cars with similar powerplants (BMW’s 328i is a glaring example) bereft of this malady.

We will say this is the only real chink in the Buick’s armour though, as the rest of the car delivers a wholly satisfying driving experience. Oh, wait; there is one more thing. In our opinion, the lack of paddle shifters on the steering wheel for the automatic transmission in a modern performance-oriented car is something of an oversight. When we discussed it with Buick’s representatives, they said most people don’t use them, so it didn’t make sense to add the expense to the development costs. We guess they know their existing market, but we wonder if that will put off potential conquest buyers a bit, since all of the key competitors offer them.

Happily, this is the only place you’ll find the Buick lacking equipment-wise. The sport seats are firm, supportive, and comfortable over long distances. The interior of the car has a richness we found very reassuring. Standard features for the 2014 Buick Regal GS include Buick’s IntelliLink Radio with integrated navigation, Bluetooth streaming for audio and hands-free phone operation, and a nine-speaker Harman Kardon amplification system. Satellite radio is also included-with a three-month free trial.

Bottom line, the 2014 Buick Regal GS is good looking, well equipped, and handles beautifully. If they could just fix that throttle issue, we’d be absolutely set. Oh, and give us a set of paddle shifters for the transmission.