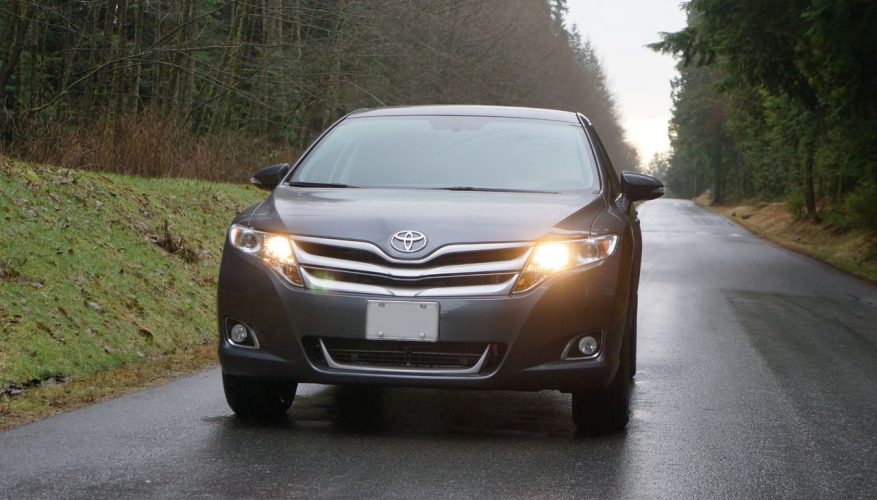 By: Trevor Hofmann
Every year the auto industry celebrates various car of the year awards and design awards, etcetera, and while all this is exciting, especially for the manufacturers of winning models, it hardly reflects the best car overall, or for that matter in any given category. The problem is that a COTY or best design award is always given to an all-new model, not a carryover model like Toyota’s Venza, and for me the Venza could easily win a best design award as well as a COTY.

Rarely is a car as well thought out as the Venza, or as good looking from every angle. Essentially the spiritual successor of the old Camry Wagon, the Venza somehow manages to successfully bridge the styling gap of aggression and elegance, cool enough for the average guy to feel proud of yet classy enough to meet most women’s more refined tastes. It’s a crossover, my particular V6-powered example sporting big, fat 20-inch five-spoke rims on meaty 245/50R20 all-season tires, an inch larger than the already substantive four-cylinder base car’s 19s on 245/55 rubber, but the Venza is more wagon-like than say a Toyota Highlander, as it is lower, leaner and drives like a sport sedan.

OK, maybe “sport sedan” is pushing it, but it’s at least as capable through the curves as a Camry SE, the sportiest version of Toyota’s best-selling midsize four-door, which I might add is quite competent on the track. I took to the hills with my two smallest kids in tow, not only to test the Venza XLE’s handling prowess but also to pick up their ski passes before I left with my girlfriend for a much needed tropical vacation. Yes, I know it’s late to be picking up ski passes, but the local mountains hadn’t received much snow prior to mid-January and therefore our favourite family-oriented ski hill (read least expensive) hadn’t opened yet. The mountain road is a two- and sometimes three-lane ribbon that coils its way over uneven pavement that sometimes breaks away on its outer edges. Other than these sections it’s a well-kept road, so high speeds are no problem, it’s just important to have a good suspension with plenty of compliance for potholes and unexpected dips and dives. The Venza includes Macpherson struts, coil springs and stabilizer bars front and rear, plus anti-vibration subframes at each end to isolate the cabin from the truly rough stuff, helping the car to manage the road surface easily, while soaking up the unruly bits effectively, tracking straight and true at high speeds in between switchbacks, and then completely surprising me with its grip around tight fast-paced hairpin corners.

Likewise the XLE’s standard 3.5-litre V6 was easily up to the mountain’s vertical challenge, its 268 horsepower and 246 lb-ft of torque pulling strongly while its front-wheel drivetrain caused minimal torque-steer, only noticeable when powering out of the really tight corners. I’d probably opt for all-wheel drive, only because the mountain authorities require chains if you don’t have four-wheel propulsion, and chains are a pain. I’d probably also purchase the base four-cylinder instead of the six, as its 182 horsepower and 182 lb-ft of torque would be good enough for me, and its gains in fuel economy would be more inline with my budget and my personal commitment to be less costly to the ecosystem.

The six gets a claimed rating of 11.1 L/100km city, 7.7 highway and 9.6 combined with FWD or 11.4, 7.9 and 9.8 with AWD, whereas the four is good for an estimated 10.0 city, 6.9 highway and 8.6 combined in FWD or 10.2, 7.1 and 8.8 with AWD, and remember that Canada’s EnerGuide numbers can hardly be trusted, so real world driving in heavy traffic, up and over hills, and everywhere else may result in an even greater ratings spread between the two engines. Incidentally, both engines use a smooth and efficient six-speed automatic transmission with overdrive.

The Venza’s optional all-wheel drive system includes active torque control, which would no doubt help out in corners no matter the conditions, but then again all Venza’s include Toyota’s Star Safety System, bringing traction and stability control to the standard package. The Star Safety System in the Venza also includes ABS-enhanced four-wheel disc brakes with electronic brakeforce distribution and brake assist, plus something Toyota calls Smart Stop Technology (SST), which automatically cuts power to the engine when the brakes are fully applied. Lastly, all the usual airbags are joined by one for the driver’s knees.

Another reason to opt for the four-cylinder is its base price, starting at only $28,695 plus $1,690 for freight and pre-delivery prep. Adding all-wheel drive ups the price point to $30,495, while my as-tested V6 with FWD starts at $30,450, and if you want the V6 AWD version it gets offered at $32,250. What I like about the Venza is that all trim levels come with the same high-quality interior, featuring soft-touch surfaces on the dash, front door uppers and armrests complemented by nicely textured harder plastics elsewhere, plus comfortable front seats with eight-way power adjustment including lumbar support for the driver, very accommodating rear seats with 60/40 split-folding seatbacks expanding the already generous rear cargo area, which measures 869 litres in base trim with the rear seatbacks upright or 1,985 when the second row is folded flat. If the panoramic glass sunroof is order a lower roof causes these numbers to shrink slightly, to 850 litres and 1,940 litres respectively.

My XLE trimmed tester included the double-paned sunroof, while additional features in this upscale package include perforated leather upholstery (mine black with really nice upscale cream-white piping), heated front seats with infinitely variable setting controller that can make them really hot if wanted, a backup camera system, a powered liftgate, and an anti-theft system. I really like that the XLE upgrade can be had on all Venza driveline configurations, meaning that eco-friendly drivers that opt for a front-wheel drive, four-cylinder variant to save on earth resources (let alone money at the pump) and spew fewer harmful emissions into the air can still enjoy a modicum of luxury. Fortunately you only need to move up to all-wheel drive to access a completely loaded Venza, not available with the front-drive V6.

Having skipped directly to options, I neglected to tell you about the base Venza’s standard equipment. Before I do, I should mention that last year the Venza was given a mid-cycle upgrade with a bolder two-piece three-ribbed chrome grille that improved the look, while the headlights were updated along with new standard fog lamp bezels and more chrome to the lower front fascia. New mirror caps received integrated turn signals and puddle lamps, plus the mirrors also included convenient convex blind-spot mirrors. The aforementioned standard 19-inch wheels were added to each corner and the taillights were modified too, although it was difficult to see the difference between these new lenses and the old ones. That they still look stylish is a nod to the strength of the original design, likewise for the rest of the car.

The same can be said for the interior. Despite being an update, the 2013 Venza utilized the exact same dash design that the car has used since inception, which benefits from a soft touch dash top and front door uppers and harder plastic albeit nicely textured lower dash and door panels. Although it looks the same overall, the Venza gets a redesigned tilt and telescoping three-spoke steering wheel with a new standard button for Bluetooth connectivity (and the steering wheel controls are extremely easy to use with convenient thumb prompts while the Bluetooth is unbelievably easy for adding a new phone), plus new standard simulated woodgrain trim on the centre console and window switch surrounds (although my tester had cool silver gloss patterned surfacing on the lower centre console and gear shift lever as well as the rear armrest).

You might be able to tell that I like the Toyota Venza. For me, it scores high in every category. Certainly those looking to buy a car-based crossover that imitates a truck-like SUV won’t be interested, but those who appreciate great styling and superb functionality mixed together with the ride and performance of a sporty wagon should sit up and take notice of this very well designed car.
©(Copyright Canadian Auto Press)
Car Shopping Tools