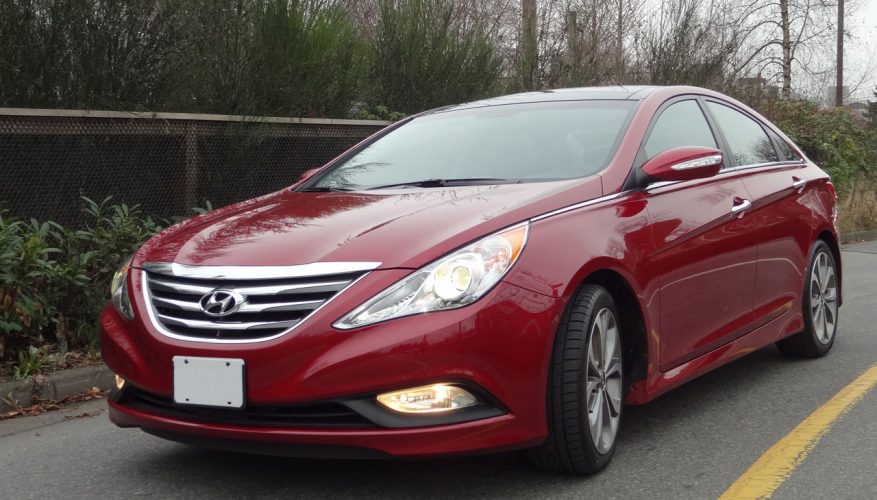 By: Simon Hill
Staying ahead in the mid-size family sedan market has never been easy. The segment is brutally competitive and chock full of worthy rivals including the Honda Accord, Toyota Camry, Ford Fusion, Mazda6, Nissan Altima, Volkswagen Passat, Kia Optima, and the list goes on. Given this competitive landscape and the fact that Hyundai’s current-generation Sonata is entering its fifth year on the market, it’s no surprise that the Korean automaker is expected to replace it with a seventh-generation model for 2015. In the meantime however, to keep things interesting and up-to-date Hyundai has given the current car some notable tweaks and refinements for 2014.

Many of the Sonata’s new-for-2014 goodies are reserved for the upper trim levels, but that worked out well for me because Hyundai set me up for the week in a "Venetian Red" Sonata 2.0T Limited, a top-of-the line model that benefits from most from the updates.

Externally, the changes to the Sonata are quite subtle. At the front the grille has been revised to make it bolder and more fluid (from what I can see this translates to "the crease lines flowing in from the hood have been toned down"), and HID headlights have been added for 2.0T Limited models. At the back there are new LED taillights for all trim levels, and a reshaped rear bumper with a diffuser-style fascia insert (this echoes the bumper on the Sonata Hybrid, and is said to be more aerodynamic than the previous bumper). At the corners there are new 17-inch and 18-inch wheel designs, and certainly the 18-inch wheels on my test car were smart and modern looking.

Technical changes for 2014 include improved NVH (noise, vibration, and harshness) reduction measures, with additional foam in the A- and B-pillars, new sound-deadening carpet and, Hyundai tells us, an additional dynamic damper (there was no technical explanation provided for this, but dynamic dampers are typically used to reduce unwanted movement of suspension and drivetrain components when the car encounters irregularities in the road).

All trim levels get Hyundai’s DSSM (driver selectable steering mode) for 2014, which allows you to change the weighting of the electric steering with the press of a button. Personally I find this to be a bit of a "set and forget" feature that most drivers will likely just leave in "Normal" mode, but I certainly don’t mind having the option of making the steering a little more "weighty" (read "sporty") when desired (there’s also a "Comfort" mode that renders the steering extremely light and vague feeling for those who prefer things numb).

Another change for 2014 that’s restricted to the 2.0T models is a new sports-tuned exhaust, and I noticed this feature right away, commenting in my driving notes that the engine has a "nice sporty burble at low speed, and maintains its composure when pushed." I should point out here that the 2.0L turbocharged engine is a thoroughly pleasant powerplant, producing 270 peak horsepower at 6,000 rpm, and a healthy 269 lb-ft of torque all the way from 1,650 to 4,500 rpm. It grunts around town perfectly happily at low revs, and winds out to redline without fuss when you really want to get going, launching the Sonata from 0-100 km/h in about seven seconds.

To make it that much more fun to wind the engine out, the 2.0T also gets paddle shifters. These work competently enough, with reasonably quick shifts, but they fall short of being truly sporty because the transmission doesn’t perform rev-matched downshifts, so any attempts at aggressive downshifting are accompanied by a certain amount of protest from the drivetrain.

Inside there’s a plethora of new luxury and convenience features aboard the Sonata for 2014, but again, many of them are restricted to higher trim levels: There’s a new blind spot information system (Limited and 2.0T Limited only), a driver’s seat that’s now ventilated as well as heated (2.0T Limited only), and new eight-inch touchscreen display with navigation system (Limited and 2.0T Limited only). This larger touchscreen features updated software and graphics for a more contemporary look, and I found it to be generally easy and intuitive to use (as an aside, GLS and SE trim levels now get an updated 4.3-inch touchscreen display with backup camera). Finally, a leather-wrapped steering wheel is now included for GLS trim and up, and there’s a new-for-2014 LED dome light.

In practical matters, the Sonata 2.0T continues to check most of the right boxes: It’s a well-featured car for the money (the above list of new features may be brief, but the list of existing features is exhaustively long). It combines a comfortable ride with reasonably responsive handling. It has plenty of seating space in most dimensions (the one dimension that’s a little tight is rear seat headroom), with heated front and rear seats pretty much across the board (the base GL only gets heated front seats). The trunk is plenty big enough for most family needs at 464 litres. And fuel economy is perfectly acceptable for a performance minded mid-size family sedan (Hyundai positions the 2.0T Limited against its competitor’s V6 models). The official city/highway numbers are 10.0 / 6.3 L/100 (versus 8.5 / 5.8 for the base 2.4L GDI engine) and my real-world economy averaged 10.8 L/100km in mixed suburban driving (this is ignoring the 12.2 L/100km reading I got when shuffling the car around the inner city taking photos).

My complaints are extremely limited: I’d like to see Hyundai design and place the Sonata’s A-pillars a little more carefully so they’re less obstructive to forward vision. And while the interior is quite nice, with soft-surface materials where it matters (including the dash and door uppers), some of the Sonata’s competitors do a better job lately with the rigid plastics expected elsewhere in this segment.

Those nitpicks aside, the current Sonata remains a perfectly good value with a suggested starting price of $25,649 (including the $1,650 destination fee) for the base GL model, moving up to $35,849 destination in for my top-of-the-line 2.0T Limited test car with navigation. Hyundai sold 14,519 Sonatas in Canada during 2013, which is only about 28 percent behind the top-selling Ford Fusion, and now the automaker has sweetened the Sonata up a little bit for 2014. Given the car’s basic goodness, that should be more than enough to keep sales humming along until the next-generation version is ready.