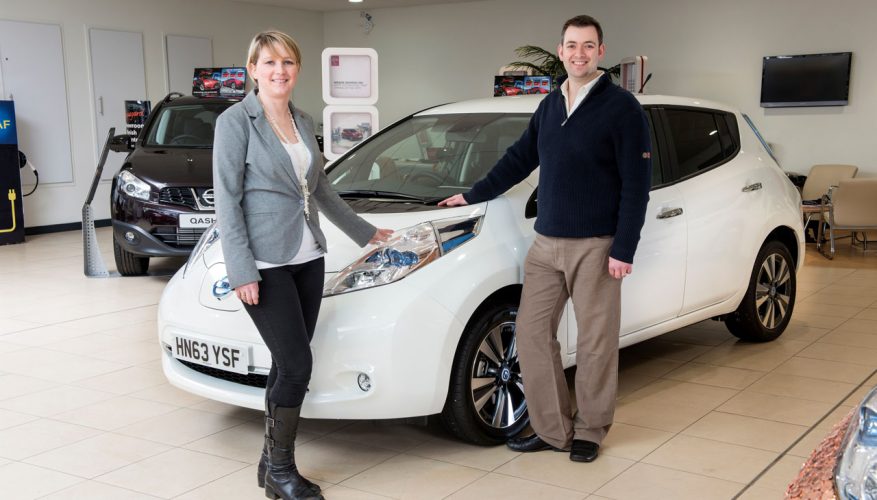 By: Simon Hill
After only three years on the market Nissan’s Leaf has proven that if you can build an electric car that gives owners the features they want and the driving range they need, you can achieve sales success.

In this case, success is counted as 100,000 Leafs sold since the distinctive electric car first hit the showrooms.

"For such a revolutionary car, to achieve this sales milestone in such a short space of time is a major achievement," said Guillaume Cartier, senior vice president of sales and marketing at Nissan Europe. "Don’t forget that when Nissan Leaf was launched in 2010, the charging infrastructure was in its infancy. But that didn’t deter the pioneers who immediately appreciated the benefits of a purpose-designed electric vehicle."

The 100,000th Leaf was sold to British dentist and self-confessed "technology freak" Brett Garner and his wife. To commemorate the sale, Nissan created a coin-covered Leaf for display at the dealership where Garner bought his loaded white Leaf Tekna. Each of the 100,000 coins covering the commemorative car (50,000 UK two-pence coins and 50,000 two-cent Euro coins) represents the approximate cost to drive the Leaf a mile in Britain or a kilometre in Europe, respectively.

Garner was prompted to buy his Leaf by a friend who owns one, and who praised it not just for its zero-emissions status and advanced infotainment features but also for its low running costs. Garner commutes regularly to work in his Leaf – a 50 mile (80 km) round trip – and he and his wife also use it for longer trips, including a 500 mile (800 km) round trip that required a stop for a quick charge on each leg.

"We have another conventional car at home but that only manages 25 mpg (11.3 L/100km) so we use it sparingly as it costs so much to refuel," said Garner.

With 100,000 sales under its belt, the Leaf can already comfortably claim status as the world’s most popular electric vehicle, but this achievement might be merely an opening salvo in Nissan’s battle for electric vehicle market share: Carlos Ghosn, the CEO of both Nissan and its French alliance partner Renault, has been one of the industry’s most active proponents of electric propulsion and the two makers have aggressive plans to expand their battery offerings. Nissan plans to launch an electric light commercial vehicle, the e-NV200, in Europe later this year, and will be campaigning its new Zeod RC electric race car at the grueling 24 Hours of Le Mans in June, hoping to not only set a track record but also to highlight the capabilities of battery power.

"Nissan Leaf is a pioneer in every sense and over the last three years has done a great deal to change attitudes towards electric vehicles," said Cartier. "We are confident the next 100,000 global sales will come even quicker."