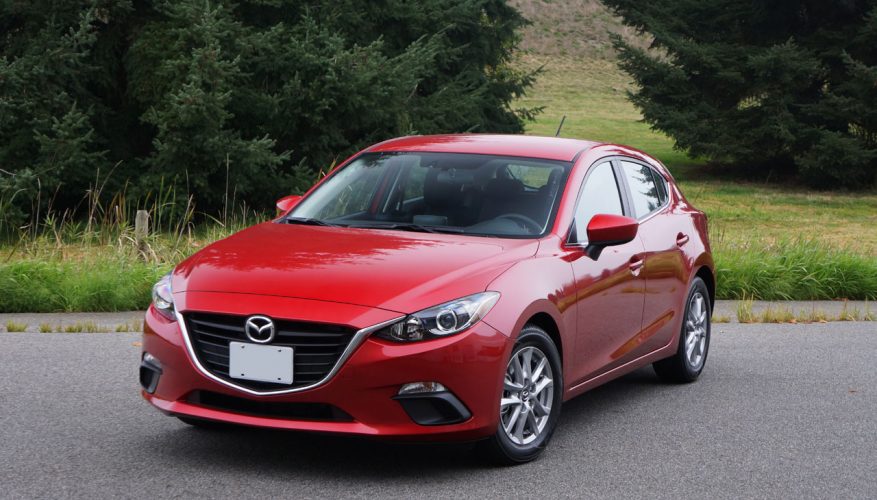 By: Trevor Hofmann
I’m lounging with my girlfriend at Starbucks within the Rendezvous Plaza at the Narita airport Terminal 2 and a brand new Mazda Axela hatchback is staring back at me, the shapely new car sitting atop a display stand and looking mighty fine in its Velocity Red Mica coated sheet metal, the one bright spot in the drab white and gray departure area. Japan can’t be too proud of this airport terminal, but they should be waving their white and red Hinomaru at this beautifully shaped Hofu, Japan-built automobile.

Just before you start lamenting about all the cars sold in other countries that we Canadian’s can’t buy, the Axela is nothing more than a Japanese-market Mazda3 with a different badge. Entirely new for 2014, few cars are as stylish no matter the price. It’s drop-dead gorgeous, a smaller take on the elegantly sporty Mazda6 that was revised for 2013.

I drove a new Mazda3 in GS trim late last year, just before I tested the slightly sportier GT. The big difference between the two is the engine, the GT using a larger 2.5-litre four-cylinder good for 184 horsepower and 185 lb-ft of torque and all trims below using a 2.0-litre four pushing out 155 horsepower and 150 lb-ft of torque. Just in case you’re thinking that I was hard done by in the lesser of the two 3s, consider that the base DOHC, 16-valve, direct-injection Skyactiv engine still pumps more muscle than most of its competitors, not to mention the standard manual transmission incorporates six forward gears instead of the usual five, while the optional automatic that was fitted to my tester boasts six forward gears as well.

The result of all these cogs and the sophisticated engine they’re mated to is spirited performance mixed with excellent fuel efficiency, the Mazda3 Sport’s claimed rating being 7.0 L/100km in the city and 4.9 on the highway with the manual or 6.8 and 4.9 with the autobox; both use cheaper regular fuel. I say “claimed” rating because Canada’s EnerGuide fuel economy rating system is a farce, my actual real-world consumption being a hair over 7.0 L/100km combined city/highway or about the same as the much more realistic U.S. EPA rating system. Either way it’s ultra-efficient, so use the Canadian numbers for comparison purposes but don’t build your budget around them.

Normally the only way to get fuel economy like this is to purchase a hybrid or a diesel, but Mazda has taken its green initiative in a different direction. Skyactiv, the name I attributed to the engine just above, is actually a name endowed on the automaker’s entire fuel-friendly, low-emissions Jinba Ittai philosophy. Rather than go the alternatively expensive hybrid route and potentially suck all the fun out of its performance image with delayed throttle response and continuously variable transmissions, the sport-oriented brand dramatically increased engine compression and added direct-injection to make the most of each droplet of fuel, simplified the sporty short-throw manual gearbox to reduce weight while reducing friction in the manual-mode six-speed automatic, increased the use of high-strength steel and aluminum in the body and chassis to reduce overall mass while aiding rigidity, made the i-ELOOP regenerative braking system available, and more. In the end you’ve got a car that can be driven carefully to minimize consumption and pollutants or taken to lofty limits in order to eke out every ounce of adrenalin in your thrill-a-minute lifestyle.

The GS doesn’t have the same meaty rubber as the GT, its wheel and tire combination reduced to 16-inch double five-spoke alloys on 205/60 all-seasons instead of 215/45R18s. The bonus is a smoother more compliant ride, a benefit on bumpy inner-city streets and alleys, while the GS still runs through the curves with confidence-inspiring agility. The reason its so capable lies in a chassis that consists of MacPherson struts, coil springs and a stabilizer bar up front and multi-links, coils and another stabilizer in back, a fully independent setup incorporating lots of lightweight aluminum. The 3’s rack-and-pinion steering is direct and responsive, and includes rpm-sensing variable power assist that ups control no matter the speed. Stomping on the brakes results in quick stops thanks to four-wheel discs with ABS and electronic brake force distribution as well as traction and stability control. The rest of the 3’s safety suite includes active front headrests, an engine immobilizer, anti-theft alarm and all the usual airbags. Blind spot monitoring with lane departure warning and rear cross traffic alert are available in the top-line GT’s Technology package, as is Smart City Brake Support (SCBS) that first warns the driver and ultimately applies the brakes if a panic-braking situation is detected.

A GS Convenience Package can be added, which includes three-way heated front seats that can get therapeutically hot, heated mirrors, a leather wrapped steering wheel, shift knob and parking brake handle, plus rain-sensing wipers, while a Moonroof Package adds the obvious moonroof as well as fog lights.

Now that I’ve delved into such detail I should probably fill you in on the base Mazda3 GX features, which include 16-inch steel wheels with covers, powered windows and locks with remote entry, and powered mirrors. The steering wheel gets tilt and telescoping functionality as well, always appreciated, while the baseline 2014 Mazda3 GX also gets new auto-off headlights, Bluetooth hands-free phone connectivity, and a dual exhaust system for that brand new 155 horsepower 2.0-litre SkyActiv four-cylinder engine and six-speed manual SkyActiv gearbox that I mentioned before, completely upgrading the entry-level 3.

I really like the new Mazda3 Sport’s styling and interior, truly a cut above most of its compact rivals, with a high quality full soft-touch dash-top plus soft-touch front door uppers, enhanced switchgear and much improved electronics, including that console-mounted HMI rotary controller that I mentioned before. The controller isn’t the only BMW-esque design, the fixed colour screen sitting atop the centre dash-top also looks similar to the new 3 Series infotainment screen. Some of its inner systems work more like Audi’s MMI, however, which is a good thing.

For instance, the radio includes a program that finds all the local stations automatically by the press of a button. Great right? My only complaint is that it doesn’t necessarily find all the stations available, at one point omitting the strongest AM news/talk station in my city, and strangely it never placed them in any sensible order, instead randomly sorting stations every which way on the interface.

As mentioned, the big rotating HMI dial used for accessing the infotainment system works a lot like iDrive or Audi’s MMI. Three buttons surround the controller for quick access to Home, Radio or Navigation settings, plus a return button. The volume button is to the right, but I used the steering wheel spoke switches instead. My tester didn’t include a navigation system, but one can be added. I tested it with the GT model and found it worked better than expected, in that it now tells you which streets you’re passing even when it’s in audio mode.

One of the reasons to opt for the Sport is its convenient hatchback design, which allows for 572 litres of cargo aft of the 60/40-split seatbacks, and when these are laid flat capacity for life’s gear expands to 1,334 litres. Then again if you opt for the security of a trunk, the Mazda3 sedan can keep 350 litres of gear safely locked away.

After a week behind the wheel I felt much like I did five years ago when Mazda introduced the outgoing 3 Sport. Similarly, the new 2014 Mazda3 ups expectations in the compact class, delivering superb value for its $15,995 price tag in sedan guise, plus $1,695 for freight and pre-delivery prep. The Sport starts out a mere thousand more at $16,995, and my Sport GS tester started off at $20,695, again a lot of car for the money.
©(Copyright Canadian Auto Press)
Car Shopping Tools