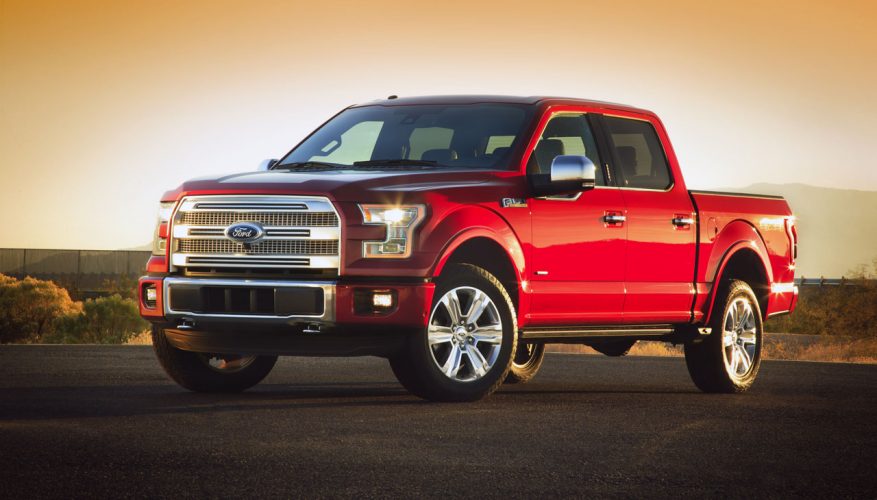 By: Simon Hill
Amid the dazzling concept cars and flashy displays at Detroit’s North American International Auto Show, one of the most significant debuts was Ford’s all-new 2015 F-150 pickup truck.

The F-150 is hugely important for Ford: The F-Series has been the best-selling vehicle on North American roads for 32 years, and for the 13th generation version Ford has gone far beyond the usual mechanical updates and styling changes, essentially reinventing the workhorse pickup with a high-strength steel frame and a new aluminum body. The only significant steel body panel is the sound-deadening firewall between the engine compartment and the cab.

The alloy bodywork, which is stylistically very close to the bold Atlas Concept shown at last year’s Detroit Auto Show, shaves an impressive 318 kg (700 pounds) of weight from the truck. This helps the F-150 tow more, haul more, accelerate quicker and stop shorter, all while contributing to improved fuel economy.

To illustrate the inherent strength of aluminum, Ford’s display at the show included panels of military-grade aluminum as used for blast shields on military vehicles. Ford claims that the F-150’s new aluminum bodywork is actually more dent and ding resistant than steel, and during the truck’s development, customers using the F-150 for construction, mining, and utilities were enlisted to test and prove out the high-strength aluminum-alloy cargo box.

Under the hood, the 2015 F-150 will be available with a range of four engines: Joining Ford’s proven 3.5-litre V6 EcoBoost and 5.0-litre Ti-VCT V8 are a new economy-minded 2.7-litre V6 EcoBoost with standard Auto Start-Stop, and a new naturally-aspirated 3.5-litre V6 engine with twin independent variable camshaft timing that will function as the base engine. According to Ford, the 2.7-litre EcoBoost engine will deliver the same power as some mid-range V8s. The standard transmission across the range will be the same six-speed automatic as in the current-generation truck.

Underpinning the new truck is a familiar rolling chassis, with coil-on-shock and double wishbone suspension up front, and Hotchkiss-type live axle with leaf springs in the back. Steering is by an electrically boosted rack-and-pinion gear, and there are four-wheel vented disc brakes.

To help owners get the most from their trucks Ford will offer the F-150 with an impressive range of tech, convenience, and infotainment features. These include a 360-degree surround-view camera system, integrated loading ramps, rear-view trailer hitch assist, a smart trailer tow module (this identifies and informs the driver of trailer connectivity and lighting issues), a remote tailgate with damped operation, high-wattage 110-volt outlets in the cab, and more.

The new F-150 will continue to be built at Ford’s Dearborn Truck Plant in Dearborn, Mich., and Kansas City Assembly Plant in Claycomo, Mo. It will go on sale in late 2014, and will be offered with rear-wheel drive and four-wheel drive in five basic trim levels: XL, XLT, Lariat, Platinum and King Ranch.