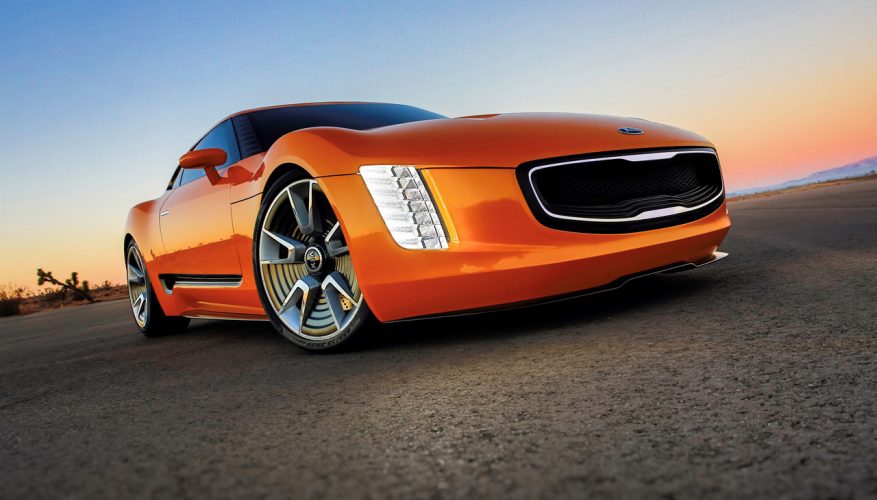 By: Simon Hill
You have to give Kia credit for getting the most out of its GT4 Stinger Concept at the North American International Auto Show in Detroit. The Korean automaker first teased us with an announcement of the then-unnamed concept back in early December, accompanied by an overhead silhouette image. Then, early this month, Kia kept the buzz going by revealing the car’s name and a few pertinent technical specifications, accompanied by a single head-on image.

Now with the show underway the curtain of secrecy has been raised and the GT4 Stinger concept is wowing the public in person. The excitement isn’t just because the GT4 Stinger Concept is stunning to look at – after all, that’s expected of a concept car. No, what really has auto enthusiasts a-twitter are the impressive but easily achievable technical specifications that draw from Kia’s successful racing efforts in the Pirelli World Challenge series and hint strongly at a possible production version.

Under the hood the GT4 Stinger gets a tuned version of Kia’s proven 2.0-litre turbocharged gasoline direct injected (T-GDI) four-cylinder engine, putting out a prodigious 315 horsepower.

"Our Optima race cars use the same engine and can produce more than 400 horsepower," said Tom Kearns, chief designer, Kia Design Center America (KDCA). "So why not infuse our concept with the kind of power that will make people take notice?"

Underpinning the GT4 Stinger Concept is a custom chassis with independent double wishbone suspension and quick-ratio steering rack. Overall measurements are 4,310 mm long, 1,889 mm wide and 1,249 mm high, riding on a 2,618-mm wheelbase, making the GT4 Stinger a little longer and wider than Scion FR-S, and a lot lower (176 mm lower, which is nearly seven inches).

By eschewing the luxury trappings of typical grand tourers, Kia says the GT4 Stinger’s weight has been held to a scant 1,304 kg, with near-perfect 52/48 front-rear weight distribution.

"Driving enjoyment was the number one priority in designing the GT4 Stinger," said Kearns. "It’s an authentic 2+2 sports car that can turn heads as a daily driver while also being right at home on the track. It’s about purity, simplicity and timelessness. The GT4 Stinger is a throwback to days when driving a car was a visceral experience that wasn’t muted by electronic gimmickry."

The GT-4 Stinger Concept was designed in California by Kia Design Center America. Thanks to several key styling elements including the signature grille it is immediately recognizable as a Kia, but it also represents a bold step forward, with what Kearns calls a shrink-wrapped appearance.

"It’s as if the body panels were formed around the chassis instead of merely welded to it," he explained.

While the official word from Kia is that there are currently no plans to bring the GT4 Stinger Concept to production, the company’s press materials noted that "Kia has a history of delivering production vehicles that bear a strong resemblance to the concept that preceded them, and the GT4 Stinger provides a possible and highly provocative glimpse into Kia’s future." To us, that reads, "Stay tuned."