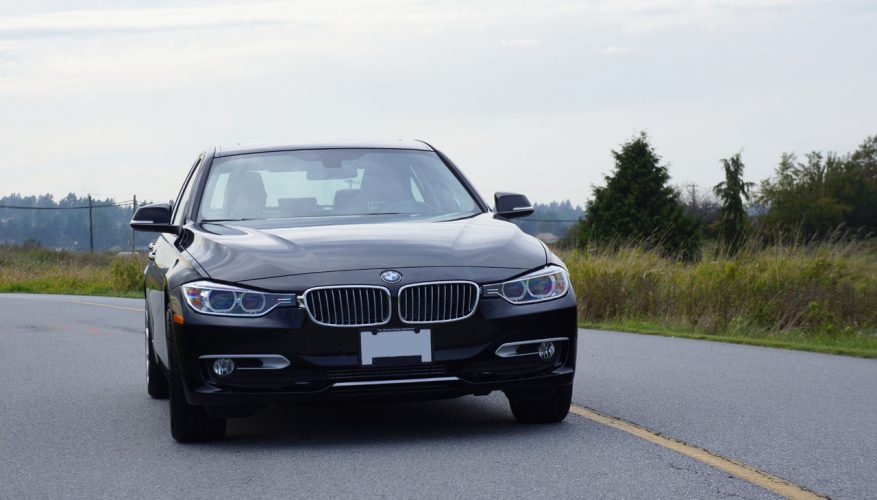 By: Trevor Hofmann
At first glance the new BMW 320i looks as appealing as any other new 3 Series model. It incorporates the same shapely twin-kidney grille that each 3 has been endowed with since being redesigned last year, features the same stylish headlamps butting up against that grille, which have since also shown up on the all-new X5, identical sloping front fenders and four-door greenhouse, plus the same attractive rear end styling including a set of very nicely sculpted taillights. To my eyes at least, it’s the most attractive 3 Series in a very long time, a design I found immediately likeable. The 320i is simply the entry point of 3 Series ownership, and to that end is on a distinctly different mission than the other models in BMW’s highly revered compact sport-luxury offering.

To say that the 3 Series is legendary in sport sedan circles is an understatement. It’s been the benchmark for the sport portion of that equation for as long as it’s been in existence, endowed with a particularly impressive ability of combining an ideal level of sport and luxury plus that other element of performance most imitators have rarely if ever achieved, thrills behind the wheel that aren’t due to any lack of control. The 3 has long been all about balancing power and handling, its gifted team of Bavarian engineers finding that perfect weight distribution and exact communicative steering response mixed with smooth, quick acceleration and equally smooth, precise shifts. So how does this new less expensive 3 Series measure up?

The engine is basically the same 2.0-litre direct injection, twin-scroll turbocharged four-cylinder mill as the 328i, albeit detuned from 241 horsepower to 181, the torque reduced from 255 lb-ft to 200, and like its more powerful sibling maximum thrust arrives at a deep 1,250 rpm and continues through to 4,500 (the 328i actually makes maximum torque to 4,800 rpm). While that doesn’t sound anywhere near as exhilarating from naught to highway speeds it nevertheless is more than adequate, delivering sporty acceleration equal to 7.5 seconds to 100km/h with the manual and surprisingly 7.1 with the automatic, which was the way my test car was outfitted. The 328i, in comparison, achieves 100km/h a second sooner no matter the transmission choice, 6.1 clicking by before 100 zips past.

I happen to love the beautifully shaped gearshift lever BMW now offers in every model it makes, especially its intelligent manual-mode shift pattern that needs a tug rearward to upshift and push forward to downshift. The shifter is a bit complicated at first, with the need to press more buttons than probably necessary (one on the side to toggle between Drive and Reverse, and one on top to select Park), but once acclimatized it becomes second nature and you’re off to the races. There are no paddle shifters with the 320i, a disappointment, but the effortlessly smooth transmission’s eight speeds allow for optimal fuel efficiency, the 320i rated at a claimed 9.0 L/100km in the city, 5.5 on the highway and 7.4 combined with the manual or 8.7 city, 5.4 highway and 7.2 combined with the automatic, and with all the Efficient Dynamics systems turned on via leaving it in its default Eco Pro mode, it turns in real-world results that are closer to the EnerGuide estimates than many other cars I’ve tested: 8.5 combined city and highway including hills and fast-paced serpentine stretches of two-lane tarmac. Not bad at all.

While the numbers are good, some of those Efficient Dynamics technologies aren’t so appealing, first and foremost the dulled acceleration Eco Pro mode provides. Then again when I’m driving around town I hardly care about ducking in and out of traffic like I did when younger and more foolish, and when on the freeway I’m happy enough just to leave the car in cruise and putter along. For those moments when I want to push the week’s drudgery far into the dark recesses of my mind by tackling the aforementioned ribbons of twisting tarmac, Eco Pro mode gets turned off and fuel economy be damned, I’m going to let my hair down and have a little fun.

This said BMW could use a few lessons from the Japanese when it comes to designing an idle-stop system. The 320i’s automatically brings the engine back to life after shutting down at a stoplight to save fuel with nowhere near the calm, composed effectiveness of say, a Toyota Camry Hybrid that incidentally uses a larger displacement four-cylinder engine so therefore should require more energy to turn it over. An Efficient Dynamics feature that works wonders is the 320i’s kinetic energy recharging system, which charges the battery when coasting or braking. A fuel consumption gauge just below the tachometer swings left to the car’s Efficient Dynamics range, turning from red to blue, which lets you know you’re driving efficiently. Just the same, when wanting to feel sporting (or luxuriant) it’s a good idea to shut Eco Pro off and switch on Sport mode for a much more satisfying driving experience.

To that end the little 2.0-litre revs willingly and delivers enjoyable performance, especially when thinking back to previous BMWs I’ve owned. My 1985 E30 325e with its near bulletproof ETA inline-six only made 120 horsepower, 18 less than a 1992 E36 318is that became my driver later, although the former car’s 170 lb-ft of torque made up for its lack of power in spades so it was plenty fun to drive, while that 318is made a mere 129 lb-ft of torque. Still, the 318is was a pile of fun compared to regular 111 horsepower 318i models sold during the same era, and E30 318s barely broke the 100-horsepower threshold. Compared to these, the new 320i is a powerhouse. All said nobody’s really comparing the 320i to these decades old classics, but rather to new competitors that never existed way back when.

Yes, the competition is getting better and better, hitting BMW right where it hurts, performance. This is especially true when it comes to the German brand’s legendary handling, where the 320i’s ultra-firm runflat tires (which save the weight of a spare and therefore aid fuel economy) have no doubt perplexed its chassis engineers beyond reason, resulting in a car that feels more loosely sprung than any 3 Series I’ve ever encountered before. I didn’t mind the ride, proving comfortable enough albeit firm in traditional Teutonic style. Just the same, if it were my personal 320i I’d ditch the RFTs and go with conventional tires as soon as they wore out. Search out “BMW 320i run-flat tires” and you’ll see endless posts of owners that hate them, not to mention their extremely high replacement costs. The 320i’s wheels will accept normal tires and I’m guessing it’ll deliver a great deal more of that legendary 3 Series handling without the RFTs.

The interior of the new 320i is a mix of fabulous and flimsy, the fabulous being the cabin design and general layout, still one of the best driving positions in the industry with superb outward visibility all-round, while much of the car’s fit, finish and materials are top grade. For instance, the dash plastics and door uppers are the high-grade soft-touch plastics you’d expect in a premium car, while the latter extend right down to the bottom of each door panel, unusually good. The flimsy bits are on the opposite side of each front seat, really cheap hollow sounding lower centre console side panels that shouldn’t be part of a car that can cost upwards of $50k when fully optioned out. To BMW’s credit, the company is on a green mission these days, and the new 3 Series plastics are the most recyclable ever.

My tester was hardly base, that entry-level unit costing just $35,900 for rear-wheel drive or $39,990 for as tested xDrive all-wheel drive, plus $2,095 for freight and pre-delivery prep. That car includes a lot of the types of features the majority of luxury buyers want, such as dual zone automatic climate control, proximity sensing keyless entry and pushbutton ignition, an infotainment system with a full-colour high-resolution LCD display sitting high atop the dash for easy view, AM/FM/CD/HD stereo/MP3 audio with aux input, a USB jack and speed-sensitive volume, Bluetooth hands-free phone connectivity, steering wheel-mounted controls, a tilt and telescopic leather-wrapped steering wheel (although manually actuated), and the list goes on.

My tester had the $2,400 Premium Package that adds a very welcome heated sport leather-wrapped steering wheel, Black Dakota leather upholstery instead of the standard (although very convincing) leatherette, anthracite and chrome highlight trim, Modern Line interior styling, a load-through system for increasing its cargo capacity, a tilt and slide glass sunroof, and 18-inch alloy wheels replacing the standard 17-inch rims. A $1,200 Lighting Package was also included that added auto-dimming mirrors inside and out, plus bi-xenon headlights, while a $2,000 Navigation Package adds a navigation system and an $800 BMW Assist/Bluetooth Package. Lastly, my tester sported BMW’s acclaimed xDrive all-wheel drive, a $4,000 option that throws in the eight-speed automatic, which is a $1,600 option on the rear-drive model. Lack of paddle-shifters aside, I couldn’t have asked for anything more in a little luxury car.

Then again those split-folding rear seatbacks could have been a bit more accommodating. BMW has conveniently added pull handles inside the trunk to drop them forward, but no matter how hard you tug on them the seats merely unlock. If you don’t have rigid cargo to push them down, such as a pair of skis, you’ll need to open up the rear door to pull them down and then go back to the trunk to stow your gear. It’s a bit of a hassle, but on the positive the seats are so snuggly fit together there’s no chance of seeing any unsightly load-through cutout gaps when looking in the rearview mirror. Also positive, the trunk’s expansive 481-litre capacity makes the need to flip those seats forward rare indeed.

Like the trunk, the new 3 Series is the most spacious of its kind ever created. Rear passengers aren’t likely to complain thanks to ample leg and head room plus enough shoulder room for large adults if only two abreast. Three adults in the back are a bit of a squeeze unless smaller framed, but it’s easily doable.

In the end there’s a lot more than just the price to like about the 2014 320i. Its engine is silky smooth and torque rich for spirited acceleration, while the ZF-sourced eight-speed auto is a dream, matching the engine perfectly. Fuel economy is superb too, as is the car’s comfort quotient, but is it sporty enough to be worthy of the illustrious 3 Series badge? I’m guessing most buyers will be plenty happy with the 320i’s performance all-round, albeit true driving enthusiasts may want to step up to the brilliant 328i or even more enticing 335i.
©(Copyright Canadian Auto Press)
Car Shopping Tools