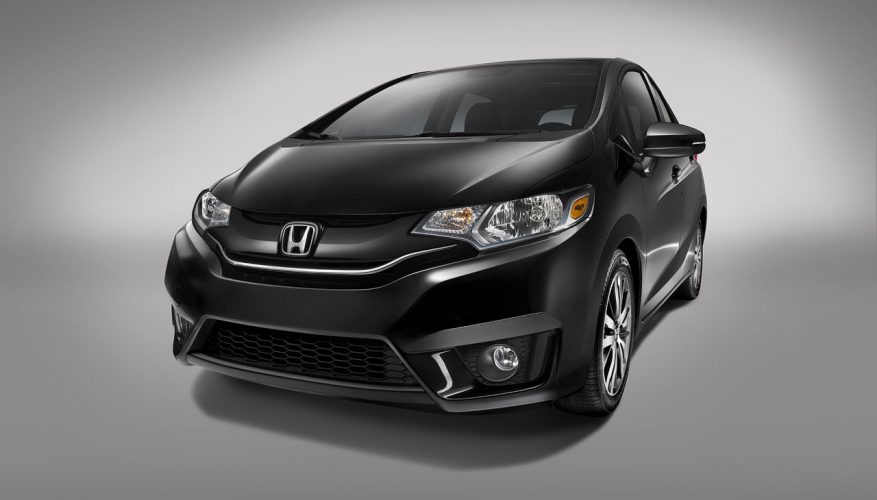 By: Simon Hill
Honda’s Fit may be small, but the Japanese automaker was determined not to let the all-new 2015 Fit get lost in the crowd of flashy concept cars and hulking aluminum-bodied pickup trucks at Detroit’s North American International Auto Show.

So for the North American debut of this versatile subcompact, Honda pulled out all the stops with a lively, dynamic introduction featuring beachgoers carrying surfboards, young parents with strollers, bohemian musicians carrying guitars, and all sorts of other representatives of the Fit’s target market.

The new third-generation Fit already debuted in Japan back several months ago and went on sale in the Japanese domestic market starting in September 2013, so the Fit’s North American appearance wasn’t exactly the most highly anticipated event at the Detroit show. It was, however, an important event for Honda, which hopes to capture greater market share with the new car, which has been tweaked specifically for North American consumption and will now also be built in North America for the first time, at Honda’s new plant in Celaya, Mexico.

"The Honda Fit is a small car with big aspirations. Faster, more fuel-efficient and more fun, it’s a subcompact with larger-than-life-capabilities," said John Mendel, executive vice president of automobile sales for American Honda Motor Co. "It’s simply the best Fit to date and, we believe, a new benchmark in the small-car category."

Stylistically, the new Fit is more aggressive and polished looking the somewhat gawky previous model, with a bold front fascia, strong character lines, and bigger 16-inch wheels. It has roughly the same external footprint as the outgoing version (it’s actually 40 mm shorter and 8 mm wider, with a 30-mm longer wheelbase) but boasts a significant increase in rear legroom (122 mm more) and total interior volume (139 litres more). It retains the popular configurable "Magic Seat" system from previous generations, and when the rear seats are folded flat the new car boasts an unrivalled 1,492 litres of cargo space.

Despite its increased interior space, the third-generation Fit’s body has shed 26 kg of weight and seen an increase in structural rigidity. Combined with a revised suspension geometry this contributes to what Honda says is "notably enhanced ride quality and fun-to-drive characteristics" plus superior safety ratings.

Under the hood the North American Fit ditches the hybrid powertrain used in the Japanese domestic market car, opting instead for a newly-developed Earthdreams 1.5-litre four cylinder engine that delivers 130 horsepower and 114 lb-ft of torque (13 more horses and 8 foot-pounds more torque than the previous engine). This can be paired to either a six-speed manual transmission or Honda’s new continuously variable transmission with available paddle shifters. Honda says the new powertrain offers superior acceleration and better fuel economy than the previous Fit, with a city/highway U.S. EPA claimed rating of 7.1 / 5.7 L/100km. Canadian equivalent numbers can be expected to look even better.

Inside, the 2015 Fit promises a rich array of standard and available features for its segment. All 2015 Fit models will be equipped with Bluetooth connectivity, a rearview camera, and an Expanded View Driver’s Mirror. Available features include proximity sensing smart entry with pushbutton start, heated side mirrors, a moonroof, heated front seats, Honda’s LaneWatch display, a seven-inch audio colour touchscreen interface with HondaLink smartphone connectivity, and, for the first time in the Fit, leather-trimmed seating.

Mass production of the Fit will commence next month, and one can expect to see it in dealerships later this year.